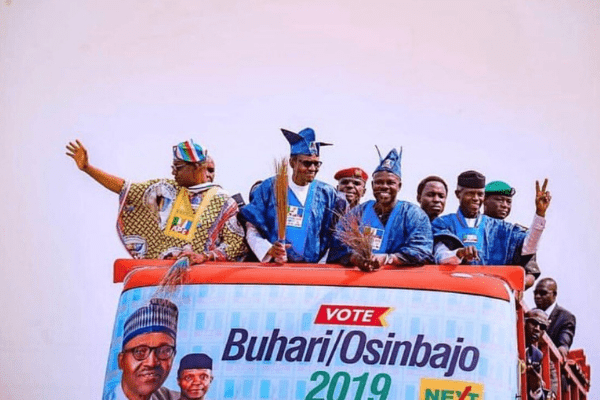 Ahead of this Saturday’s Presidential and National Assembly elections, the All Progressives Congress Presidential Campaign Council (APC- PCO) has denied that President Muhammadu did not call for war in Zamfara as misrepresented by the main opposition Peoples Democratic Party (PDP) and its Presidential candidate, Atiku Abubakar.

Atiku while on campaign in Rivers State accused Buhari of declaring war in Zamfara during his campaign in the State with use of the Hausa word, “fitna” which implies inciting violence.

But Festus Keyamo, APC-PCO Spokesperson said “fitna” the Hausa word the President used in Zamfara, which has been taken out of context does not necessarily means calling for war or inciting violence.

Keyamo in a statement on Tuesday in Abuja argued that, “typical of the PDP and Atiku’s Campaign team, they have continued in their favourite pastime of peddling falsehood, scaremongering and misinformation. This time, the candidate of the main opposition himself, Alhaji Atiku Abubakar, sensing a comprehensive defeat this Saturday and out of frustration, threw caution to the wind in Port-Harcourt, Rivers State on Monday, February 11, 2019, when he alleged that President Muhammadu Buhari called for violence when he campaigned in Zamfara State.

“Nothing can be farther from the truth. The Hausa word the President used in Zamfara, which has been taken out of context, is “fitna”. Incidentally all our Hausa language scholars have said the word means different things: it means distress, trial, affliction or temptation. It can also be used to describe rebellion or uprising.

“In this case, President Buhari was actually weighing in on the joke told very often of recent in the North that due to the rice boom, farmers have embarked on pilgrimage and the marrying of more wives. So, what the President meant was actually a joke deliberately taken out of context: he simply told the crowd to ensure they eat very well because of the rice boom before they can contemplate giving in to those temptations.

“Even in some private meetings with our campaign team, the President has always commented on this joke. Sadly, out of desperation, Alhaji Atiku Abubakar has decided to peddle falsehood.

“We urge Alhaji Atiku Abubakar to realize that it is God Almighty that gives power and takes power. He should not use his palpable desperation to return to power (in order to sell Nigeria to his “friends” and to make them rich) to set this nation ablaze by outright falsehood”.

Amotekun may not succeed except in Lagos, says former Oyo Governor, Alao-Akala

Edo poll guber: Whether direct or indirect primary, I will emerge APC candidate…

Amotekun may not succeed except in Lagos, says former Oyo…