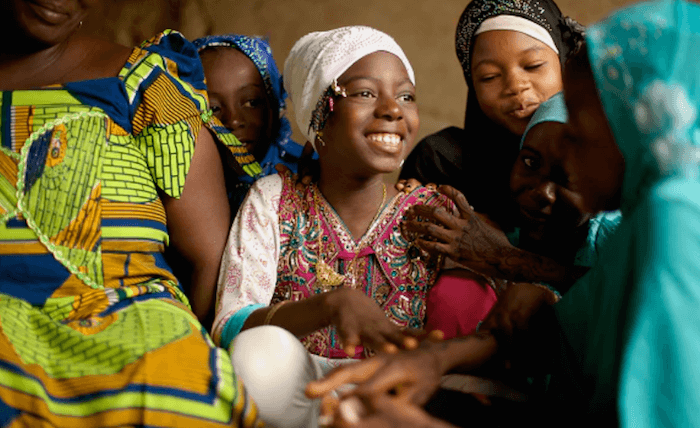 #BeingFemaleInNigeria means that as a rural woman, you are not likely to have the title deed for land – a vital source of collateral for accessing business loans. The extent to which female business owners are neglected is most evident when it comes to access to credit and formal financial services that they need to start or grow their business.

This affects women like Rakiyah, a private school teacher and mother of young twin girls, who was unable to take out a loan for her petty trade and salon because, as a woman, she did not have the collateral required by conventional banks.

Most financial systems have been designed by and for men, resulting in systemic obstacles to women’s financial inclusion. That is especially true for the marginalised women at the bottom of the pyramid in Nigeria who disproportionately face financial access barriers that prevent them from participating in the economy and from improving their lives.

Five years ago, Nigerian women started a global conversation – inspired by Chimamanda Ngozi Adichie’s “We Should All Be Feminists” talk – that allowed Nigerian women to share their experiences of gender inequality, sexism and misogyny in the country using the hashtag #BeingFemaleInNigeria. Refreshingly, some men also took to the hashtag. One common thread that runs through most of the #BeingFemaleInNigeria stories is the gap between what women know their potential to be and what society would deem it to be. The impact of #BeingFemaleInNigeria points to broader discussions we should be having about gender and sustainable development.

Global movements, like #BeingFemaleInNigeria are refocusing attention on the discrimination that women face in their social and professional lives. However, we must not forget that in the most impoverished communities, poverty, hunger, domestic violence and discrimination remain endemic obstacles to achieving real progress regarding the situation of women in society. The women at the bottom of the pyramid care more about feeding their children, educating them, growing their businesses and not having to worry about whether or not one small illness will be the straw that renders them homeless.

How can we ensure that movements like these translate to a better life for ALL women? How can we achieve inclusive and equitable economic growth if women do not have access to the same opportunities to thrive and be successful?

The cost of gender inequality

Gender discrimination is not just wrong; it is expensive. Evidence suggests that gender and income inequalities can impede labour market productivity, which is one key component of economic development; however, this effect is even more detrimental to Nigeria’s growth due to the significant role women play in the economy.

Data from the National Bureau of Statistics (NBS) shows that 49.5 percent of the population is female. Consider how gender inequality may affect our economic growth and development; by excluding half of the population from participating fully in economic activities, we are automatically reducing the quantity and quality of skilled labour as a factor of production.

Let us take agriculture as a reference point. In Nigeria, agriculture remains one of the most important sectors of the economy and women contribute between 40 percent to an estimated 60-79 percent of the labour force in Nigeria’s agricultural sector depending on if you agree with the World Bank or Food and Agriculture Organization of the United Nations (FAO).

Consequently, when female farmers are not empowered and do not have access to credit to make better decisions about land that they work, it is impossible for them to effectively utilise land as a means of food production and income generation.

In the same vein, a micro-business entrepreneur can hardly save for the rainy days. With ​59 percent of women in Nigeria living in rural areas, many of them have limited access to banks, mobile phones and economic activities.

In contrast, increasing male income, keeping female income steady, worsens survival rates and educational attainment for girls, with no impact on boys. The data illustrates that there is significant economic value that empowering women will add to addressing and correcting institutional constraints that feed gender inequalities, which hurt economic growth.

All data points in the same direction: investing in women’s economic empowerment is critical to unlock their economic and social potential. Yet, they are continuously side-lined in critical roles and Nigerian women continue to rank lower on all indexes of human development.

One of the most effective ways to create an enabling environment for women anywhere, especially the women at the bottom of the pyramid, is to promote their financial independence. Empowering them with information and needed skills that can be commercialised within their small area of influence is a good start.

When a woman is able to feed herself and her children in dignity, she is encouraged to imagine the possibility of a better life and future for her children which includes better nutrition and schooling.

By providing small sustainable loans that are easily accessed either via co-operatives or microfinance banks, Rakiyah can increase her business stock, diversify her income by setting up a salon, manage her finances in a way that she can successfully repay it, making room for more women to access even more loans.

The value proposition of non-conventional banks is the guarantee of access to credit at zero to low interest rates, requiring no collateral. In our work at Mamamoni, we have found that encouraging the financial independence of women helps increase the awareness and respect for women’s human dignity.

A few months ago, Joy was brought to our Innovation centre by her sister-in-law. She was despondent and contemplating suicide because she had no means of taking care of herself or her children. The lockdown was in its second month and we had just received some food palliatives from the Federal Government’s Victim Support Fund (VSF); so, we gave her a bag.

Then we launched the Mamamoni Covid-19 Relief Grant and gave her a small loan to start a petty business. She bought cooking oil, crayfish, garri, melon and other soup condiments for sale in small bits – she literally transformed physically because of this new source of livelihood. She laughs more, is happy and does not default on her loan repayment which is structured to suit her cash flow. She is planning to put her kids in school next January.

If financial inclusion is ensuring that every person within the adult population of a country can access financial services, then non-conventional approaches need to be encouraged to drive inclusion and empower the vast number of marginalised women who continue to strive to accomplish so much, despite having so little.

However, for us to realise the full potential of women, microfinance institutions need to focus more on investing time and targeted resources to address infrastructural inadequacies that will ensure the most disadvantaged in society have access to the same opportunities to thrive and be successful.

In terms of gender equality and development, Nigerians may be becoming more aware of gender discrimination and having the necessary thought-provoking conversations on gender roles thanks to social media. However, Nigeria has quite a long way to go.

While societal limitations and cultural traditions often undervalue and underestimate women’s potential, women face all kinds of hidden barriers to accessing finance – just because they are women. This is a status quo that must change – not only because it is the right thing to do, but because it is the smart thing to do. More importantly, the issue of empowering women cannot be seen as coming at the expense of men. The discussion so far illustrates that we all gain more.

As we engineer solutions to solve our exclusion rates, it requires collective and intentional efforts from men and women to make fundamental changes to ensure that future generations of Nigerians have a different attitude towards gender roles.

More directly, as we continue on the long march to parity and to have our voices heard, I think it’s time to have that #BeingFemaleInNigeria conversation again. This time, there is a tremendous amount to be learned from people like Rakiyah and Joy at the bottom of the pyramid who bear the brunt in a world that continually finds new and ingenious ways to tear them down.