Violence is not Nigeria’s destiny 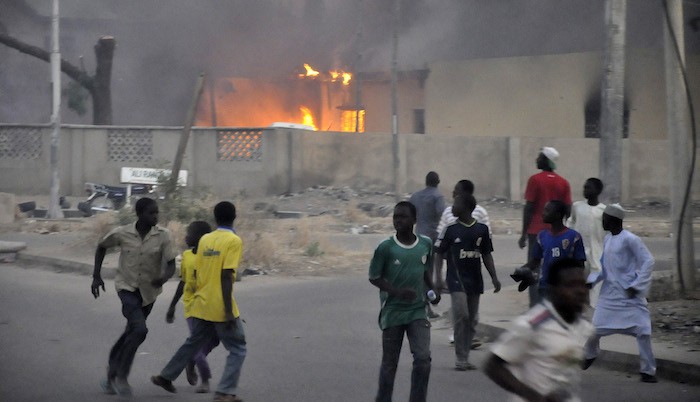 Reading Violence in Nigeria: The Crisis of Religious Politics and Secular Ideologies by Toyin Falola is to enter a time machine back to when there was the pervasive belief that Nigeria was headed towards a religious-tinged civil war. Spoilers: Fake News.

That feeling of an impending religious cataclysm was the result of fundamental misdiagnoses—some of which this book shares. But most of all, it was a failure of citizenship and statesmanship. Leaders failed to lead; the educated abandoned erudition and evil was extolled as just, in service of the right cause. Unsurprisingly, society devolved into barbarism.

Across ten chapters, the author does a great job of providing both sociological and historical insight. I finished the book more sympathetic to the perception held by Muslims about how institutions seen by southerners as neutral or secular have overtly Christian overtones to them. I agree with the critique levelled by certain Islamic scholars that many aspects of Nigerian Christianity are overly materialistic. His history of the religious conflicts in late 20th-century Nigeria is also excellently done: riveting, disconcerting and painful. What a waste it all was, as our hindsight makes clear.

As a book of history in the von Rankean tradition of telling it as it was and nothing more, this is first-rate. As a didactic work by an interested observer, then bleh. It is another exhibit for the ‘this is how our elders put us where we are’ indictment.

The most costly error that the author makes is to equivocate. Nigeria does not have a religious problem and not even a Muslim problem. It has a problem of violent extremism by some Northern Muslims. His attempt to imply some sort of equivalence between the actions of Christians and Northern Muslims led to logical cul-de-sacs. For example, after retailing the actions of warlike kings and sheikhs, he writes: ‘the early Christian missionaries knew little or nothing about Islam, characterising it as a supporter of slavery and violence’. It was. The Sokoto Caliphate was the largest slave society on earth after the defeat of the Confederacy for a reason.

That failure to follow the evidence he provides to its logical conclusions makes the book a tantalising disappointment—rather like Nigeria. But I suppose that seeing further requires that we stand on the shoulders of giants and midgets too.

Why is the south spared the religious-tinged conflicts that plague the North? It is a fascinating question. Luckily, I did not need to go far to find answers. The author credits the ethnic cohesion of the Yoruba and the near-total absence of Muslims elsewhere in the south. I disagree. The Muslim parts of Edo state, for example, are not wracked by religious violence either. Perhaps it was different in 1998 when the book was published but in any southern city today there are thousands of Northern Muslims, yet while ethnic tensions persist, religious violence is non-existent. Even 23 years after the book’s publication, Islamic violence is restricted entirely to Northern Nigeria.

Other factors he considers are the historical legacy of the jihad of Uthman dan Fodio, the antagonistic confrontation between brotherhoods and sects within Northern Islam, the use of dehumanising language (something he also rightly condemns some Christians for), the influence of foreign countries like Iran and Libya and the antipathy towards non-Northern Muslims demonstrated by the government of Ahmadu Bello. The shocking fact, delivered in passing by the author, that the late Premier preferred hiring foreign Muslims even to southern Muslims is further evidence that we need fewer hagiographies about the first generation of political leaders in independent Nigeria.

All the factors listed above were like barrels of gunpowder awaiting the spark provided by the immense economic decline of the 1980s. A chart of the decline of the GDP Per Capita in Nigeria between 1980 and 1998 looks like a very long-necked camel stooping to drink. The economic decline of cities in Northern Nigeria created a mass army of disgruntled youths. They were recruited by demagogues and unleashed on people who like them were trying to get by. Occam’s razor would suggest that the greater peace in the south is simply the result of better economic performance than the north.

That James Carville strikes again and ‘it is the economy, stupid’ makes this book a salutary warning for us fated to grapple with the ill-effects of the actions of our forebears. The 2020s seem set to be a period of economic decline following a more boisterous decade. In the 1970s, General Gowon famously said that Nigeria’s problem was too much money. Painful economic decline followed with violence on its heel. Soon there will be teenagers who do not remember the heady days of $100+ oil prices and 7% growth. Demagogues already stalk the land. Will we allow their fell plans to prevail?

Reading this book makes it painfully clear that Nigeria did not and has not learned from the past. That political rivalry and surreptitious accommodation allowed an initially small cult of extremists to expand and threaten civil authority might sound like the emergence of Boko Haram, but it was the macabre mirror-event of the emergence of the Maitatsine crisis. Consider the following quotation:

‘Shagari’s speech became the model of government reaction to all subsequent violent outbreaks of the 1980s and 1990s. The Federal Government would express shock, seek the cooperation of the public and promise to investigate. The government usually [denies] any connection between the violence and its politics, blaming the violence on misguided fanatics manipulated by internal and external anti-government agents out to embarrass Nigeria’s leadership and to discredit the country as a whole’.

Has the model of the government’s response to crises changed?

Two lessons stand out most of all. The first and most important is that religious violence in Nigeria is not inevitable. It depends on our choices. Most of all, reading the book makes the case for competent, impartial policing self-evident.

The second is that the path to its permanent resolution runs through economic competence. That too depends on the choices we make. It should be obvious but the point of independence was to control our destiny. Many Nigerians past have not seen that as a sacred responsibility.

This book is full of copious examples of those irresponsible actors. If we want different, we must be different. Otherwise, those who come after us will indict us too.