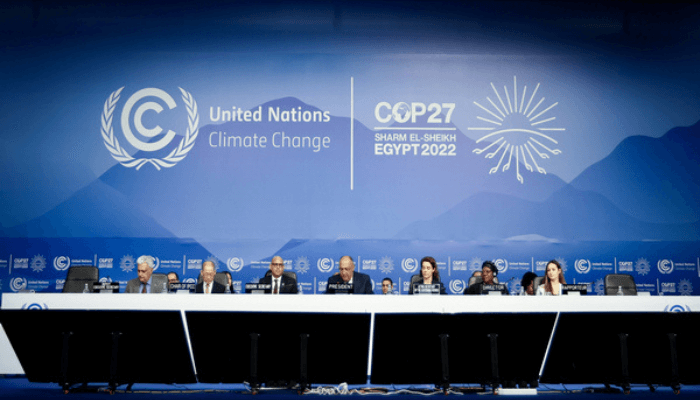 The Conference of Parties (COP) is an annual UN climate and nature summit, usually attended by heads of governments with the aim of arresting and controlling global warming and climate change arising there from. This year’s conference COP27 has just ended in Sharm el-Sheikh, Egypt. It follows the last one in Glasgow a year ago and is tagged the “African COP” because of a number of Africa related agenda issues debated.

Major outcomes of COP27 include two issues of major concern for Africa and Nigeria, namely the decision to set up a climate loss and damage fund and the resolution “phasing down” rather than “phasing out” the burning of fossil fuels.

Nigeria is among the top 10 of the world’s most climate-vulnerable countries, though contributing one percent of global greenhouse gas emissions and therefore had a major stake in the deliberations at COP27.

After nearly 30 years of demanding that rich countries set up a fund for rescuing and rebuilding of communities stricken by climate disasters, at COP27 it was resolved to set up a climate loss and damage fund. The fund would provide a lifeline for vulnerable, low-lying and low-income, poor communities who are impacted by severe climate events such as floods, hurricanes and drought brought about as a consequence of climate change. The fund would be set up within the next year by rich countries, although other countries like China, Russia, Saudi Arabia and other Gulf states were identified as potential donors.

The fund will provide finance to rebuild the physical and social infrastructure of countries ravaged by extreme weather events. Setting up the fund is considered a major victory for poor countries who have argued that they deserve to be compensated by wealthy countries which have been the source of vast majority of emissions into the atmosphere since the industrial revolution that have brought about climate change. Wealthy countries have continued to kick against this fearing that this would be legally admitting liability and having to pay “climate reparations” for climate damages, especially against fossil fuel companies.

They argue that it might also impact other financings for bodies supporting climate finances through multi- lateral aids.

How does Nigeria benefit from this fund? The recent flood disasters in Nigeria and Pakistan were cited as examples of where such funding would be applied. An Associated Press (AP) news report cites the World Weather Attribution group, in the report of a study released during the conference, found that climate change was overwhelmingly behind the heavy rains last rainy season in Nigeria. The season was 20% wetter than normal and led to massive flooding that left over 600 people dead and about 1.2 million people displaced, with worse to come as global average temperature continues to rise. They said that the heavy rains and flooding was made many times more likely because of climate change.

“We will see very intense rains in the region in the coming years” according to climatologist Friederike Otto of Imperial College London, leader of the study. Scientists called for more concrete policies to enhance their work and greater investments in weather stations in the region to inform their work in future, and also investments in early warning systems to enhance their level of preparedness and help communities in Nigeria prepare for extreme weather events. These are adaptation measures which require huge resources for building structures.

The Nigerian government has its work cut out in utilizing these ideas without further delay especially as the government qualifies to benefit from their loss and damage fund. The credit for the brave move and success, in setting up this humanitarian fund has been attributed to the role played by the European Union, led by its Commission’s Vice President and Commissioner for Climate Action, Frans Timmerman. On the other hand the United States was clearly not willing to back the deal during the negotiations.

Another item that was of great interest for Nigeria in the deliberations was the issue of the production of fossil fuels, coal and oil and gas. It was agreed that fossil fuels are to be “phased down” not “phased out”. Some delegates accused Egypt , who are hosts and president of COP27, of producing a text that “protects oil and gas petro-states and the fossil fuel industries.” African countries vigorously argued that they must be allowed to continue producing their gas assets.

The question was how Africa can balance economic growth while helping to save the planet in tackling global warming? Can Africa grow without production of fossil fuels? African countries took the position that if Africa is to join the rest of the world to hastily abandon fossil fuel use, it can be damaging to the region’s economy, because Africa needs to raise living standards of its populace by exploiting its fossil fuel endowment. They insist that for resource poor countries of Africa, poverty reduction, energy security and economic development have priority over de-carbonization.

African leaders want funding to exploit African extensive gas reserves to generate electricity in a continent where about 55% of the population or about 600 million people have no access to electricity.

African delegates argue that the continent emissions is less than 4% of global emissions and see no reason why they should pay for the acts of commission by developed countries which have used fossil fuels to industrialize their economies over a period of two centuries. They assert that advanced countries which have been responsible for the highest emissions per capital should bear heavier responsibility for achieving the global target of limiting temperature increase

Some African nations say they have the right and want to use their gas resources while they transit to renewables. Some argue natural gas can strategically used to maximize Africa’s well being.

Africa argues for “Just and Affordable Energy Transition and insists that energy sources have to be accessible, available and reliable, and natural gas ticks all these boxes. After all, the energy transition requires that nobody should be left behind. Transition to cleaner energy should not happen at the cost of people’s livelihoods and Africa’s energy security. Africa has a glaring deficit of energy and cooking fuels.

The president African Development Bank, our own Akinwunmi Adesina weighed in to support Africa’s position.

Africa needs revenues from its gas reserves to invest in economic development, and in renewable energy projects and in climate change adaptation and mitigation, especially as pledges and promises by wealthy countries have largely not been fulfilled. Nigeria, Egypt, Algeria and now Mozambique hold substantial gas reserves and should be allowed to exploit them, after all Exxon, a major oil company is active in Guiana developing new oil fields while the British are active in the North Sea prospecting for oil and gas.

The decision on fossil fuels was not entirely a popular one as delegates from some poor island nations and climate activists joined the wealthy nations in pressing Africa to use renewable energy resources which they have in abundance being endowed with 60% of global solar power potential. But transition to renewable by African countries will be slow. Even climate scientists admit that the roll out of solar and wind globally has been slower than expected, even in wealthy countries.

Some analysts say maintaining supply-demand balance will be challenging therefore both nuclear and fossil fuels are required, while aggressively pursuing renewables. Although the rich nations have stuck to pledges to phase out coal power despite the energy crunch in the wake of the Ukraine war, some have revived their coal burning power plants as a consequence of the war.

The United Nations Framework Convention on Climate Change (UNFCCC) was signed in 1992 at the United Nations Conference on Environment and Development following the Earth Summit that year in Brazil. Its key objective is stabilization of greenhouse gas (GHG) concentrations in the atmosphere at a level that would prevent dangerous anthropogenic interference with climate systems.” The Conference of Parties (COP) is the apex decision-making body of UNFCCC. Owing to global consensus on the need to drastically reduce the burning of fossil fuels and their contribution to global warming, the UNFCCC had over the years procured pledges from countries around the world to stabilize greenhouse emissions in the atmosphere.

At COP27 countries reaffirmed their commitment to keeping a global temperature rise to a limit of 1.5 degrees Celsius above pre-industrial levels. According to the UNFCC, the package “also strengthened action by countries to cut greenhouse gas emissions and adapt to the inevitable impacts of climate change, as well as boosting the support of finance, technology and capacity building needed by developing countries.”