The reign of money and ethno-religious sentiments in Nigerian politics

I recently closed opinion polls. For the results, see the below screenshot – here lies part of the root of Nigeria’s wave of leadership, economic and security crises: 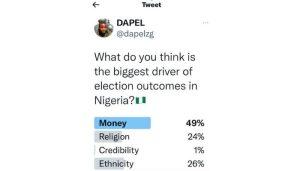 Bad leaders and bad governments are by-products of the people’s choices. Based on the polls, the decisions of the people are ill-shaped by recipes (e.g., prejudices, sentiments and greed veiled in ethnicity, religion and materialism etc) that generate bad outcomes.

When the people trade their votes (or mandates) for money, they have transferred the power to govern them to the “elected” officials.

It is important to stress the fact that the Nigerian Constitution concentrates so many powers with the president of the country as we often underestimate the heavy hand of Aso Rock, given the Nigerian president more powers over his citizens (Nigerians) than the US president over Americans even though the US president is deemed the most powerful officeholder in the world.

This is because the US Constitution is drafted and framed in such a way that it gives more powers to the people (the governed) than to the president and other elected officials. Conversely, the Nigerian Constitution concentrates more powers in the hands of the head federal executive branch of the government.

For instance, the Nigerian president has the unilateral power [without the approval of the parliament, Congress or the National Assembly] to appoint and fire all the military chiefs in the country, 14 of them ranging from the army, air force, navy, police, customs, immigration, civil defence, etc.

This is an enormous leaver of power at the disposal of the president with which he can, if he so wishes, use it to clamp down on political foes and intimidate members of the judicial and legislative branches into caving to his agenda.

Sadly, the people are on the receiving end of bad governments that they have been deeply involved in bringing to fruition. We, the people, should not only examine but work ourselves if we must have a transforming leadership.

However, in a nation of established, strong and flourishing institutions the following holds up:

(1) The ruled have more power than the rulers, such that through the power of the ballot, the citizens can punish bad leaders during elections, swapping them with fresh set of leaders.

(2) Nobody is above the law. If you break the law, the law breaks you in return. In other words, you are charged, prosecuted and punished according to the law.

(3) The ballot paper is stronger than any currency. That means election outcomes reflect the wishes of the people and not the wishes of godfathers, the superrich or a few elites. At this juncture, it is important to note that credible elections are peaceful means by which bad leaders are replaced and punished. This is one of the beauties of democracy.

But deeply flawed elections are corrupt means by which good leaders are punished and bad leaders rewarded to reinforce their hold on power. This is chiefly the evil of democracy.
What is the problem?

I don’t believe Nigeria has a leadership problem. Here is what I believe it has: a people problem.

Abraham Lincoln, John F. Kennedy and Martin Luther King Jr. What about them? They have a couple of things in common:

To date, they have been deemed America’s beloved leaders, the very best of the best – selfless, powered by the drive and passion to see their country transform from one degree of greatness to another.

They were also fuelled by (and moved with) compassion towards the upliftment of their fellow countrymen and women to such the extent that no American (dead and living), except the country’s founder, George Washington, matches them in comparison. Yet, all three were assassinated on active duty for their fatherland.

They were ‘not’ blazed to death by the bullets nor killed by their haters. Their goodness attracted the bullets; therefore, they were slain by their merits. That should tell us a lot about America. But it is not only in America. It is a global phenomenon.

Thomas Sankara, the former president of Burkina Faso, a man with a glowing blueprint to transform his country’s fortune, was killed in office. And neither is it a recent wonder. Centuries ago, during the reign of Pontius Pilate, this happened:

“Which of the two do you want me to release to you?” asked the governor. “Barabbas,” they answered. (Barabbas had been thrown into prison for an insurrection in the city, and for murder.)”

The problem has been and will always be the people. The people will keep getting the leaders they so graciously deserve.

With all due respect and apologies to those rooting and looking forward to a great Nigeria through wonderful leaders, I dare say, good people will not rule Nigeria. But that is me speaking based on antecedents and the current reality on the ground.

There has never been a shortage of great ideas to move the nation forward. Any idea, however brilliant, has continuously been foiled by greed, corruption and fractionalisation, because, as a friend recently asserted: “it is the political system that fails. If money rules, then the people have no choice.”

However, one day, a good man shall emerge and govern Nigeria. I don’t know how. That’s me speaking based on faith in God almighty.

If truly the problem is leadership, then the first set of leaders that have come and gone would have gone with the problem.

But since its independence, Nigeria has been replacing its leaders – drawn from among the people – yet the problem persists to this day.

Someone may say, “hang on a second: we’ve had wonderful and scandal-free people that assumed leadership positions but were later ruffled by corruption.” O.K. I get it!

But what about the answer to this question: what is the origin of the seed of corruption that stained them?

If, from the onset, the people are corrupt-free but become smudged when they lay hold of power, then it follows that that which corrupts sits somewhere around the offices: on trees, chairs, etc, and possesses (or robs off on) the people as soon as they become leaders? I will not buy this.

Some of the country’s leaders, deemed to be riven with misrules and misgivings, where were they 30 years ago? They were still among the people as ordinary citizens. Not yet in power.

If by all standards, a leader is not ill-influenced by power, the leader has only validated the claim that the leader was never corrupt. That means, if the people change, the leadership will change.

If they do, there will be no delegate to trade votes for money at the expense of credibility, no bureaucrat to guide (and collude with) a politician in fleecing the public treasury, no banker to help them launder stolen funds, no lawyer to defend treasury looters, and no investor to invest the politician’s ill-gotten fortunes.

Please bear in mind the fact that the system is designed, set up and run by the people (or the “deep state”).

Governments come and go, but the deep state remains, and that in a democratic setting, no candidate wins an election without the votes of the people, therefore by voting a questionable candidate, the people are sending a clear message: we want bad leadership.

You need to stop self-sabotaging your finances

How self-trust is your secret to success!