The paradox of social media and hate speech bills 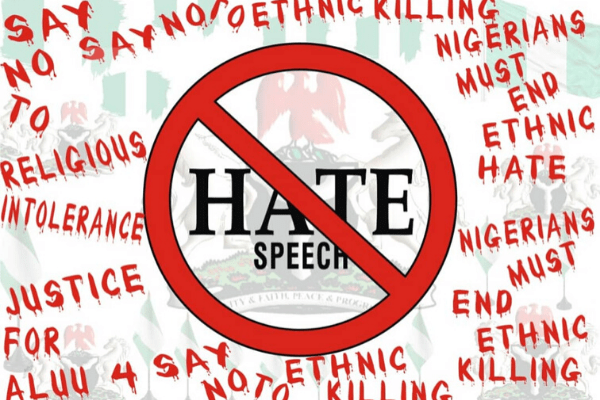 The hue and cry for bills against Hate Speech and for regulation of the online space by the present ninth National Assembly seems to challenge deontic logic and gauge the press. The Nigerian government must evolve a tradition of respect for press freedom and as a matter of policy recognise the fundamental rights of Nigerian citizens of access to information about how they are governed.

It cannot be overemphasised that a free press will provide the people with the true account of the goings in government and society at large, and act as a watchdog of the people’s right against government abuses. Hence, the code of conduct of the Nigerian press declares, “That the public is entitled to the truth and that only correct information can form the basis of sound journalism and ensure the confidence of the people”.

The social media provides the window for ventilation of opinions that naturally would have been gate-kept by the eagle eyes of editors in the traditional media. The emergence of social media has therefore made global citizens and groups active contributors and consumers of global news and information.

By definition, ‘Social media’ means internet-based tools and services that allow users to engage with each other, generate content, distribute and search for information on-line. It is this interactive or collaborative nature of these tools that makes them, ‘Social’.

The social media also called Web 2.0 come in various forms, which are video context communities, e.g. YouTube.  Collaborative projects, e.g. Wikipedia, Blogs and microblogs e.g. Twitter, Social networking sites e.g. Facebook, LinkedIn, Two, WhatsApp and 2go, Virtual Social world – Flicker. With the wide range of social media offerings, global news and information flow are no longer left in the hands of professional journalists. The concepts like online and citizen journalism have emerged to describe changing patterns of global news and information gathering and dissemination in the era of social media.  It is therefore expected, the two-way interactive flow of information.

What then is the thrust of the social media bill? In addressing this question, one will need to emphasise that there are actually two bills agitating the minds of social media users and Nigerians at the moment. There is ‘Hate Speech Bill and Social media Bill’. Both bills are not one and same, though they somehow happened to have been conflated in discourses on the internet. The Hate Speech Bill, otherwise called the ‘prohibition of hate speech bill’ is championed by Senator Sabi Abdullahi, the APC deputy chief whip in the Senate, while the Social Media Bill, otherwise called the ‘Internet Falsehood and Manipulation Bill’ is the brainchild of Senator Mohammed Sani  Musa, a senator in APC, Niger East.’

There are strong indications that these bills have been plagiarised from similar legislation in Singapore, especially the one sponsored by Musa. It is equally worrisome to note that despite the criticisms that trailed these bills from well informed Nigerians when they were first introduced in the upper legislative chamber of the National Assembly and the public outcry over these bills, they have already passed second reading on Wednesday, November 23, 2019, in the House.

The Hate Speech Bill stipulating that any person that violates the law shall be liable to life imprisonment and where the act causes any loss of life, the person shall be punished with death by hanging.

In response to this, the United Nations and the United Kingdom have opposed the death penalty clause, in the proposed National Commission for Prohibition of Hate Speech Bill introduced by Senate Deputy Chief Whip, Abdulllahi. The UN described the death penalty as barbaric, noting that its inclusion in the bill was unacceptable.

On the bill to regulate the use of social media in Nigeria, entitled, ‘Protection from Internet Falsehood and Manipulations Bill, 2019, (SB.132), after scaling through the second reading in the Senate, was referred to Opeyemi Bamidele, APC Ekiti Central-led Committee on Human Rights and Legal Matters to report back to the plenary in four weeks.

The bill, going by what the sponsor, Mohammed Musa, in his lead debate, proposes a framework and system of regulation, control and conduct on the use of the internet and various social media platforms in the transmission of information in Nigeria.

Acceding to him, “The bill is not an attempt to stifle free speech or dissenting voices, it is rather an opportunity to address a growing threat which if unchecked, can cause serious damage in our polity and disrupt peaceful coexistence.” He further stated that much as the internet has numerous benefits, it is also used to manipulate information and spread falsehoods. The sponsor added that non-state actors engage in geopolitical interests and identity politics, use internet falsehood to discredit governments, misinform people and turn governments, one group against another.

However, Chimaroke Nnamani, who spoke against the bill, was cut short by a point of order raised by Bala Ibn Na’Allah, who quoted the provision of Section 39(1)(3) of the 1999 Constitution as amended, to justify the introduction of the bill by the Senator. Section 39(1) of the 1999 Constitution provides that “Every person shall be entitled to freedom of expression, including freedom to hold opinions and to receive and impart information without interference”.

The bill stipulates that offenders would serve a minimum of three years jail term or a fine of between N150,000 or both. It is noteworthy at this juncture to point out that a similar bill of anti-social media was introduced by the Eighth Senate, which equally sparked outrage across the country, and was later withdrawn. The old bill titled, ‘A bill for an Act to Prohibit Frivolous and other Matters Connected therewith’ was sponsored by the then Senate Leader, Bala Ibn Na’Allah, and sought to compel with sworn court affidavit or face six months imprisonment upon conviction.

Nigerian Union of Journalists (NUJ) had earlier cautioned the Federal Government on its plan to regulate social media. NUJ’s position came after the Minister of Information and Culture, Lai Mohammed, challenged the NUJ-led campaign against the proposed bill.

Nigerians are beseeched on daily basis with multi-faceted political and socio-economic problems. We are daily confronted with high level of insecurity, banditry, rape, kidnapping, inequality in the economic system, high level of unemployment, epileptic power supply, poor rating of the nation’s international reputation, religious and tribal intolerance, insurgency, institutional corruption, poor infrastructures in both educational and health care delivery sectors, ritual  and political killings, the flagrant  ravaging of  lives, homes, farmlands and in many cases whole communities by the never-touched herdsmen, directly or indirectly defended by  the  powers  we voted to secure the land. We read of some governors who have plundered the treasury of their states, polarised the state and today are in the Senate chambers to make laws meant to govern the law-abiding citizens.

Perhaps, one may be accused at this juncture of being heuristic and being in a haste to solve all the problems at a go. This is not the case and cannot be. Succinctly, a country or leadership should as a matter of necessity, first prioritise the needs of the governed and address them in that order. Leaders must realise that they lead by virtue of the people’s mandate to whom power belongs; leaders need to be reminded that they are first among the equals in considering their relationship with other citizens. Members of the National Assembly must not forget in a hurry that a nation is more stable politically when the powers of the leaders are reasonably charted and bridled by the constitution.

Although I do not claim to possess superior economic prowess, especially in the area of hierarchy of needs but will like to borrow from Abraham Maslow’s hierarchy of needs. The basic need of man from this generally accepted theory is food and shelter, according to Maslow. These are economic needs. Next is security needs, before social and actualisation needs of man. The essence of this brief analysis is to situate the current quest and haste of the ninth National Assembly to pass bills on social media and the hate speech that attract death penalty amongst the more obvious pressing needs of the society. This analysis will provoke readers to discern the pureness of motive in preferring to pass bills on matters that may not contribute meaningfully to the socio-economic, political, or psychological growth of the nation.

One of the major qualities of good leadership is patriotism. By this, leaders must have selfless and deep-rooted love for the nation and not motivated by personal ambition and idiosyncrasy. Members of the ninth National Assembly are yet to demonstrate this devotion and dedication in their call to duty. One may begin to ask: Of what economic value will this bill add to the nation’s dwindling currency? How can the death of Nigerians for making hate speech contribute to the development of the nation?  Why is there no bill to hang political looters? Why is there no bill to hang party leaders who sell and buy votes? Why is there no bill to hang Boko Haram members who have killed, maimed and plundered the North-East Nigeria with impunity? How is hate speech more dangerous and destructive to nationhood than human trafficking and ritual killing? How can we equate the monumental corruption in the government which in the first place, was responsible for Buhari’s administration smooth ride to power, with hate speech? Nigerians voted Buhari administration into power because he promised to fight corruption, if therefore, there is an area that should have occupied the minds of the legislators, it should be in this direction.

It needs to be overtly admitted that the future will have no pity for those men who, possessing the exceptional privileges to alleviate the people’s suffering through appropriate legislation, but have chosen to provide hangman instead for fellow Nigerians. With the foregoing in view, the call on the elites, well-meaning Nigerians, the executives, religious leaders, opinion leaders, and those in the Diaspora to unite to challenge and speak-up against this bill and to call attention of the ninth National Assembly to more pressing needs of the country: They should channel their intellect to issues that border on insecurity, unemployment, devaluation of naira, the case of insurgency, corruption, among others.

What a paradox, that with all the innumerable challenges that are crippling the economy, our legislatures are busy debating on issues that worry Nigerians least. Do we need to arrange workshops and seminars to refocus them to face developmental legislation as that is actually what we need at present? National Assembly should delineate and concentrate on the essentials of governance, and not to amplify their phobia for criticism which is an inevitable ingredient for a true democracy.