Open Access Data Centres laying the infrastructure for successful deployment, adoption of 5G, IoT and other advances in Africa 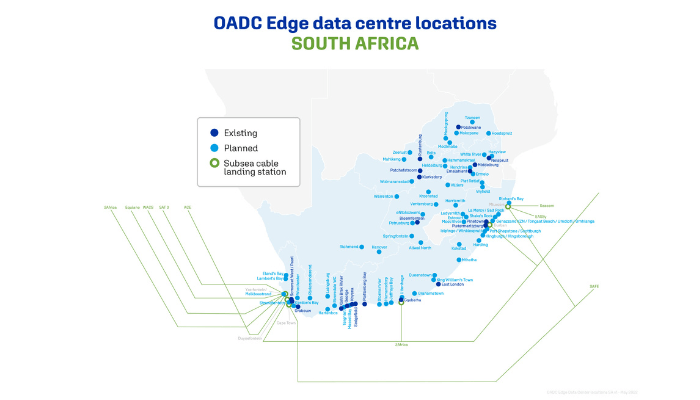 Digital technologies promise to dramatically improve how people live, work, play and communicate. This is particularly true throughout sub-Saharan Africa where digitisation has the ability to deliver improved access to life-enhancing services for individuals, communities and enterprises that would otherwise be excluded through lack of infrastructure, skills and funding.

Key trends in the region’s digital landscape, including increasing digital adoption by small and major businesses and one of the world’s most youthful demographics, indicate growing demand for next-generation connectivity.

According to industry body the GSMA, by 2025, there will be commercial 5G services in at least seven African markets, including Kenya, Nigeria and South Africa, totalling 28 million 5G connections.

With digital adoption by businesses growing and the GSMA reporting almost 50% of the population subscribing to mobile services, the arrival of new hyperscale subsea systems, including Google’s Equiano and the Meta-led 2Africa is a vital enabler to further digitisation, implementing an upgraded digital backbone that will support ongoing cloud operator and content provider buildouts into Africa.

However, Africa remains a long way from the vision of a “modern and robust digital infrastructure that is inclusive and reaches all people” outlined in the Digital Council Africa’s 2021 annual report, which notes fixed fibre broadband household penetration remaining flat across sub-Saharan Africa at less than 3%, and mobile internet subscriptions growing to just 30%.

Transformational new data centre (DC) operator, Open Access Data Centres (OADC), established in 2018 as part of the WIOCC Group, is changing this situation for the better, bringing a unique proposition to Africa. OADC is not only building DCs in multiple countries, but is deploying facilities throughout a country, right-sizing each DC according to local demand (from hyperscale, through “midi” to edge).

Its flagship facility on a four-hectare campus in Lagos is a core hyperscale DC designed to deliver tens of Megawatts of critical power load, whilst the capacity of OADC Durban is hundreds of racks and a few Megawatts. In key metropolitan areas, “midi” DCs in the 200 to 400-rack range are undergoing fit-out, with capability to scale to 800+ racks as demand grows. And finally, at the network edge smaller facilities of up to 50 racks/150 kilowatts of critical power are rapidly coming onstream.

Since securing $200m of funding in November 2021, OADC has moved at pace, with over 20 DCs operational in South Africa and more under construction there and in Nigeria. Its unique core-to-edge architecture supports:

• the cloud community in migrating content closer to the network edge

This unique core-to-edge architecture enables clients to cache and process data closer to the point of use, minimising latency and optimising backhaul network costs. In delivering content to the edge, we are establishing local interconnect points and interconnect ecosystems, disaggregating peering away from the large core DCs.

In addition to our OADC Durban facility, designed to scale to 5 Megawatts as demand grows, our >20 OADC EDGE DCs live in South Africa deliver content to the edge at precisely the point of use. Two further mid-range DCs will be coming on-stream in Cape Town by year end, with two more at key locations in Johannesburg. This architecture is a critical element in the infrastructure needed to expedite delivery – and leverage the benefits – of 5G as it emerges across Africa.

As we continue to extend rollout of edge DCs across South Africa, we will deliver the same architecture into Nigeria and, subsequently, into smaller countries across sub-Saharan Africa – particularly at the “midi” and “edge” scale.

We are also implementing innovative field support structures across our field teams and adopting Internet of Things (IoT) and AI techniques to optimise our operational support functions.

Uniquely with the WIOCC Group, the carrier-neutral DCs being deployed by OADC can take advantage of an established pan-African hyperscale network infrastructure, operated by a carriers’ carrier; a sister company – for interconnectivity across Africa. Being carrier-neutral means that we are also ensuring a vibrant ecosystem of other carriers in all consumption points and DC delivery points, interconnected and optimised across all available technologies.

Also uniquely, OADC is hosting landing stations for both major new subsea cables being deployed into Africa. The Meta-led 2Africa cable is being hosted in OADC Durban in South Africa and at Mogadishu, Somalia. In June 2022, Google’s Equiano cable landed directly into OADC Lagos in Nigeria. The cable which also lands north of Cape Town, South Africa and is being extended from there into a new OADC facility in Cape Town.

Africa is clearly ready for this level of high-quality carrier-neutral digital infrastructure. Access to a readily-available, open-access infrastructure delivering high levels of connectivity and underpinning local interconnect ecosystems is critical to ensuring successful deployment and adoption of 5G, IoT and other advances that will deliver growth to the region throughout the 2020s.

Coker is the CEO of Open Access Data Centres

Investing in our Planet: How Coca-Cola is championing environmental sustainability