Nigeria versus Biafra: the hypocrisy of Great Britain 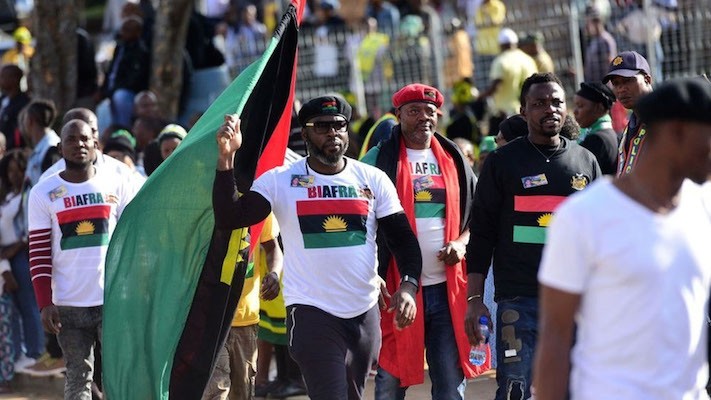 “Leave this Europe where they are never tired talking about man, yet murder man anywhere they see him.” – Frantz Fanon.

The showdown between the Nigerian Federal Government and groups fighting for the resuscitation of the defunct Biafra Republic, has reached a critical point with the decision by the United Kingdom government to grant asylum to “persecuted” members of the Indigenous People of Biafra (IPOB), and the Movement for the Actualizations of the Sovereign State of Biafra (MASSOB).

In the just released “Country Policy and Information Note Nigeria: Biafran secessionist groups”, the UKVl, a division of the Home Office, directed its decision makers to consider if a person “who actively and openly supports IPOB is likely to be at risk of arrest and detention, and ill- treatment which is likely to amount to persecution.

“According to the guidelines, the decision makers “must also consider if the (Nigerian) government’s actions are acts of prosecution and not persecution. Those fleeing prosecution or punishment for a criminal offence are not normally refugees. Prosecution may, however, amount to persecution if it involves victimization in its application to the authorities.”

Most significantly, the UK government defined “Biafra” as an area “in the South East of Nigeria that comprises the states of Abia, Anambra, Ebonyi, Enugu, and Imo. The area is inhabited principally by Igbo (Ibo) people who are one of the three largest ethnic groups” in Nigeria.

We hail the decision by the government of the United Kingdom to grant asylum to persecuted members of the Indigenous People of Biafra (IPOB) and the Movement for the Actualization of the Sovereign State of Biafra (MASSSOB). This puts lie to the criminalization of the two groups by the Nigerian federal government and the declaration of IPOB as a terrorist organization.

But Great Britain or the United Kingdom was the reason why Biafrans are being “persecuted” in Nigeria. It was Great Britain that gathered a discrete group of unrelated people, both in culture and outlook and called them Nigeria, but refused to make them one nation. Britain equally introduced a differential policy of administration that favoured one group against the others. When the landmines she laid began to explode, Britain turns round to provide palliatives to the victims. Wonderful!

In what we know today as Nigeria, we have unrelated indigenous groups inhabiting the area, such as the Bantu, the semi-Bantu, the Sudanese, the Shua-Arabs, the Tuaregs, the Fulanis, etc. In order to create a large market for her industries at home, Britain gathered all these people together into one country, without considering their different cultural backgrounds.

Not only that, Britain divided the territory into three unequal parts, the North, the East, and the West, in such a way that the size of the North is three times that of the East and the West put together. In addition, while all institutions in the North were preserved and sheltered from the wind of change blowing across the globe, Britain exposed the South to Western influences and civilization.

The result was differences in social mobilization and education between the North and the South. These, notwithstanding, the North was pampered by Britain and made a privileged group. Structures were created and skewed in favour of the North to give them undue advantage to enable them lord it over the rest of the country. This made the North to always be the determinant factor in Nigerian politics, with the open support of the government of the United Kingdom or Great Britain.

For the group of people the United Kingdom government now recognizes as “Biafra”, the Igbo, they have been on the suffering side, or suffer “persecutions,” since Nigeria was created, both in the hands of the Nigerian federal government, and some non-state actors, and Great Britain always looked the other side. The Igbo were hated, discriminated against, killed, maimed, and their property destroyed or confiscated in different parts of Nigeria.

The high point of the “persecution” of the Igbo, was in 1966, when over 30,000 Easterners, particularly the Igbo, were gruesomely massacred in different parts of Northern Nigeria, with almost half a million people rendered homeless as refugees. In spite of the outcries and public protestations by these persecuted people, the United Kingdom, as former colonial master of Nigeria, did nothing to mediate the crisis. Rather, it was Britain that continued to fuel it.

Biafra became a practical necessity in May 1967, when no amicable settlement was found on the crisis, which resulted to the imposition of war on Biafra by the Nigerian federal government. Almost immediately, Britain took side with Nigeria, and began to supply them with arms and ammunition, as well as with technical assistance, with which they fought Biafra. For the thirty months that Nigeria-Biafra war lasted, the United Kingdom was solidly on the side of Nigeria.

Fifty-one years after Biafra was defeated in 1970, with the aid of Great Britain, the United Kingdom government is now seeing reason to support those who have been agitating for the resuscitation of Biafra Republic, and has decided to grant them asylum. Very interesting.

We thank the United Kingdom government for their new change of heart. We commend them for being so magnanimous in deciding to grant asylum to the “persecuted” Biafrans. We, however, want them to open their gate very wide, because many of us are already on our way to the United Kingdom, because we want to run away from Nigeria where we are currently suffering persecution.

As the United Kingdom government is already aware, the present administration’s formula for sharing government’s appointments and other perquisites of office, which our President had enunciated, is on the basis of 97% and 5%. This is depriving those of us who are recepients of 5%, a fair share of the country’s resources, which we believe is “persecution”. So, United Kingdom, expect us soonest.

But if all of us were to leave Nigeria on the basis of persecution to sojourn in the United Kingdom on asylum, it would entail our abandoning our ancestral land to itinerant Fulani people, who long had vowed to dip the Koran into the Atlantic Ocean. This would be scandalous.

In the circumstance, if the United Kingdom actually want to stop the “persecution” of Biafrans, they should urgently untie what they gobbled together over one century ago as Nigeria, so that each group could go its separate way and begin to develop at its own place. We have managed the relationship for too long, and it is not working. The earlier we part in peace, the better.