As Nigeria’s new administration puts together an economic team to think through priorities for the next four years, one larger problem looms in the background. Policies to tackle the multiple challenges with growth, inflation, public finances, currency and trade will only matter if they are understood as planks in a strategy of tackling a much broader issue: Nigeria is no longer an oil state.

Many analyses have already pinpointed the emergent move away from oil as the foundation of Nigeria’s political economy and pointed at the rapidly-approaching prospect of a post-oil future. Few, however, appreciate that this future has in fact already happened – Nigeria is living in a post-oil present, and has been for some years now. Reality has called time on a 45-year era of oil dominance.The only question is when our thinking will catch up.

In new findings from the Oxford Martin School’s African Transitions research programme, we determined that in 2015, for the first time since 1971, Nigeria already earned more from non-oil sources than from oil revenues. The transformation to a post-oil future is already in the past.The change has come from both a rise in non-oil tax collection, and a decline in oil prices and thus revenues. In the latest year for which figures are available, Nigeria’s total oil and non-oil revenues were equal to 6.27% of GDP. Of that, Federal Government relied on oil income for only N433 billion or 47% of its revenues, far from the higher figures often quoted in popular and academic sources. This is equal to 2.63% of GDP while non-oil revenues from Federal and State Governments combined amounted to N602.19 billion or 3.64% of GDP.

This project began as an attempt to get the most accurate figures of Nigeria’s tax-to-GDP ratios, a subject of frequent debate and revision. Recent IMF research attempting to do that ended up using their own proxies for important revenue sources such as IGR of the 36 states. To do better, we worked with official data sources for both Federal and State governments. Even our figures, however, will be inaccurate as they omit things like Local Government revenues for which no complete data exists; so if any readers can do better, please do have a go.

First we found that looking at Federal Government revenues alone, a change came in 2016. Revenue values compiled by the CBN are presented in Naira in nominal terms. The graph below translates this into dollars as a crude means of adjusting for changes in the value of the Naira. 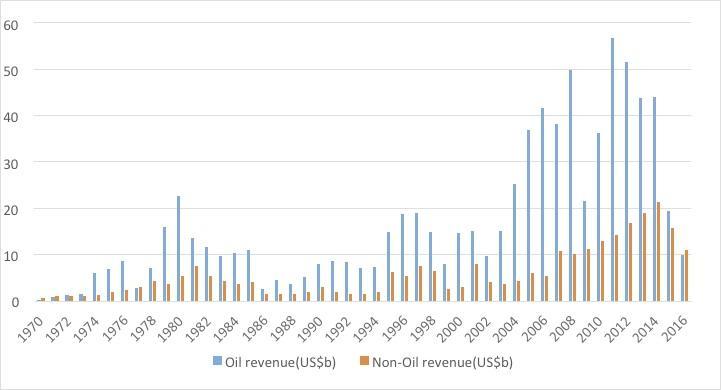 However, that must be adjusted to consumer prices to understand the true purchasing power of those revenues. From 2000 to present, inflation in Nigeria has been relatively high; due to a combination of substantial economic growth and the pass-through effects of import prices to domestic prices. When adjusted for inflation, the graph looks more like the one below (detailed calculations in the working paper if you’re interested).

This way of laying out the figures shows us that the real values have a much smaller upward trend between 1995 and 2016. In other words, the gains of increased tax effort by the Federal Inland Revenue Service (FIRS) and other agencies in collecting more revenue and enlarging the tax base, were undermined by negative factors including inflation, and possibly also currency movements and recession. Not only did oil revenues earned in dollars fall, but the dollars converted to ever-more Naira. Further, non-oil tax revenue moved similarly with the commodity price booms. So as oil revenues dropped, non-oil revenue increases just about held the line, but weren’t able to turn public finances around on their own.

But we have still forgotten about the 36 states and FCT, which is where a lot of revenue collection activity – such as personal income taxes – increasingly takes place. What happens when we put those in? The graph below shows us, with state revenues the green line: 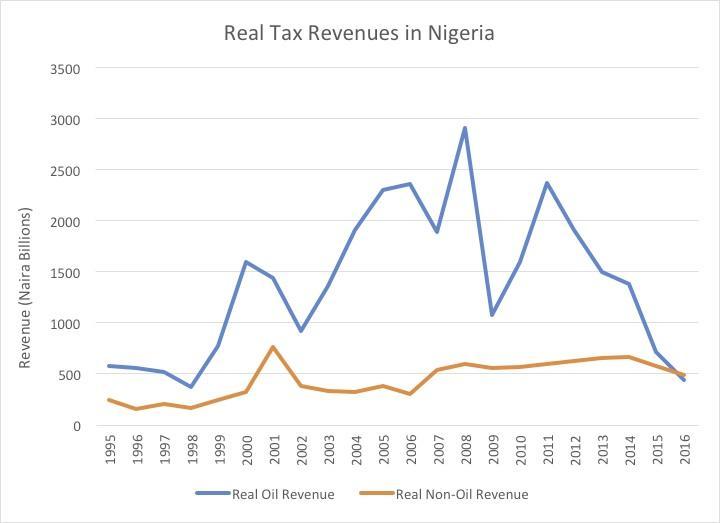 We now see an even clearer recent upwards trend in non-oil taxes. And instead of outstripping oil revenues in 2016, it turns out they did so even earlier, in 2015, when Federal and State non-oil revenues combined reached 701.20 billion Naira. In 2016 Nigeria’s Federal Government collected 5.53% of GDP in revenue, and if the taxes collected by State governments are included, this rises to 6.27%. Therefore, we suggest that the most accurate statement of Nigeria’s tax to GDP ratio is 6.27% – thougheven this will be an underestimation as figures are not available for some revenue sources.

Calling this the final demise of oil is certainly premature, based on the still-small size of the revenues involved as a share of GDP. Newer figures may even see oil revenues overtake non-oil again for a while, either because of gradual price upturns due to global demand, or sudden shocks such as Arabian Gulf crises. Such are the volumes involved that even a small price upturn makes a bigger difference much faster than the slow and patient work of collecting taxes, which rely both on developing new methods of collection, such as VAT on online purchases, and on stimulating the growth of those sectors expected to generate tax.

But in the long term, new global energy technologies and policies, coupled with the very slow movement of the regulatory reform needed to bring large new investments into Nigeria’s oil and gas sector, dictate that the overall trend will be downwards. The eventual ‘new normal’ could look something like Mexico, where extractive resources provide a significant (over 30%) slice of government revenues, but consistently less than the other sectors put together.

However while Nigeria’s economy seems to have reached a tipping-point away from oil, core institutions and policies continue to remain structured around assumptions that oil is central. Most governmental institutions bear the marks of turn-of-the-century oil-fuelled distributive and developmental thinking. Federal, State and Local Governments continue to relate through a federalism whichremains for both levels essentially about the distribution of revenues from a central pot. Equally, currency movements and the competitiveness of many economic sectors remain most heavily influenced by the remaining strong role of oil and the distortions and external shocks it produces.

Perhaps most importantly, capital formation and wealth accumulation across both private and public sectors assumes the offstage presence of a huge and commercially attractive resource endowment which covers up underperformance, forgives a range of policy and implementation sins and allows ‘non-earned’ income streams to displace more methodical means of development. Political behaviour is patterned around logics of access to national petroleum wealth, which shapes access to resources, political geography and even the highly politicised ways in which social identity formation is driven by resource allocation.

So what should, or could, institutions and policies look like if properly attuned to the post-oil present? This paper does not make recommendations as to how Nigerians should govern Nigeria. But it does draw attention to some of the issues which will be involved. Some have already emerged in open conversation, such as debates over the derivation and allocation of other forms of revenue such as VAT. Others are the subject of tricky conversations which everyone finds difficult to have, such as the fact that while large areas of the country have a good chance of being IGR-self-sufficient, others may never be within a generation, maybe two. 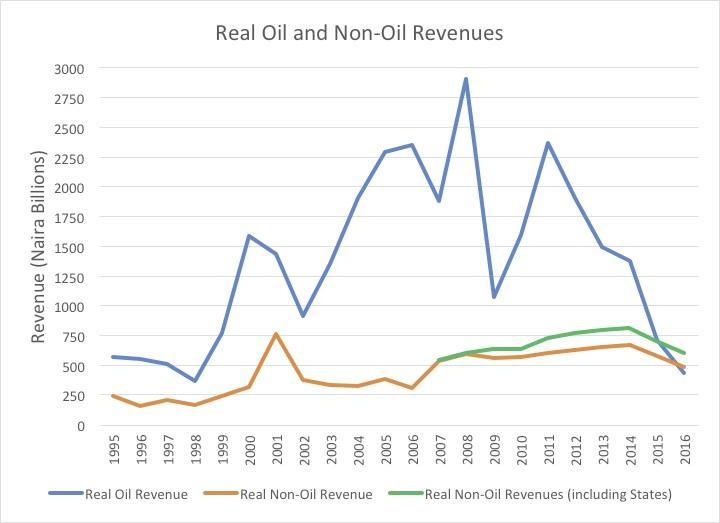 This isn’t just a north-south issue as it is sometimes stereotyped – thanks to the successive rounds of state creation and state borrowing, fiscal unsustainability is spread around Nigeria. Nigeria is really a patchwork of middle-income and very low-income areas, necessitating a clear conversation about how Federal Government as a bridging mechanism not only arbitrates that inequality but designs policies which stimulate growth in all; such as prioritising the infrastructure which connects them.

It also connects to wider questions of governance – taxing people stimulates their demands on government, so for instance if the economic engine of agriculture is to be harnessed, Nigerian governments at all levels will have to re-engage with the basic governance of the countryside after three decades of abandoning rural Nigerians to underdevelopment and a slow descent into insecurity.

And it means understanding, more clearly than we currently do, how sectors such as transport, trade, construction, and non-material industries actually work to generate wealth in the Nigerian context.

So planning for the future highlights that policies and institutions, plans and whole mindsets, will need to reorient in acceptance that Nigeria has already entered a post-oil present.That means policymakers either taking positive decisions to reorient towards capturing new bases of growth, and facing the new realities of an uneven distribution of revenue sources and spending needs; or to take the risk of evolving de-facto autonomy making the Federal Government in Abuja less relevant to shaping Nigeria’s development at the grassroots. But the biggest risk is of government at both Federal and State levels failing to nurture these new revenue bases and harness their gains by making public spending choices which add value, leading in the worst case scenario to a decline in GDP per capita and a return to indebtedness and poverty, a future more Malawi than Mexico.

The Sociology of Pyrates Emilokan Song