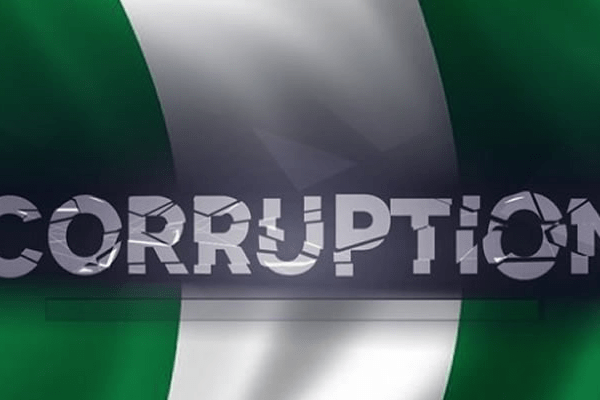 In 2011, someone broke into my sister’s office at the university where she teaches in Nigeria. Fortunately, the person was caught, arrested and charged to court.

On getting to court, the guys who handled my sister’s case informed her that they won’t be able to process the paperwork unless she pays a bribe. Initially, she thought it was a joke, but later, she realised that they were serious and she became furious.

Think about it, she was the victim, and those who should help her were demanding a bribe.

That is one of the many ways’ corruption impacts millions of people in Nigeria. Growing up in Nigeria, corruption permeates virtually every element of society. Reports of politicians embezzling millions of dollars were common, police officers stealing money or extorting money from hardworking citizens were also common practice.  I thought development will remain a farce if corruption persists however, my research on innovation and prosperity has shown that corruption is actually not the problem hindering our development. Conventional thinking on corruption and its relationship to development is not only wrong but it is holding many poor countries backwards.

The thinking goes like this, in a poor and corrupt society, creating and fostering good laws is a way to reduce corruption. This will make ways for development and innovation to flourish. This explains why many governments and development organisations invest billions of dollars annually on institutional reforms and anti-corruption programmes. However, these programmes fail to reduce corruption because we have the equation backwards.

Societies don’t develop because they reduced corruption rather, they are able to reduce corruption because they have developed.  Societies develop through investment in innovation. Earlier, I thought this was impossible, why should any person with right minds invest in a society with a poor business environment, it is and where politicians are corrupt and consumers are poor.

But the more I learnt about the relationship between innovation and corruption, the more I started to see things differently. This is how this played out in Sub-Saharan Africa as the region developed its telecommunication industry. In the late 1990s, less than 5% of Sub-Saharan Africans had phones. In Nigeria, for example, the country had over 110 million people but fewer than 500 thousand phones in the entire nation.

This fuelled widespread corruption in the entire industry as public officials who worked for state government-owned phone companies demanded bribes from people who wanted phones. However, phones were only available to those who were wealthy and could afford the bribe.

An entrepreneur, Mo Ibrahim decided to set up a telecommunication company, when he told his colleagues about the idea, they laughed at him, but Mo Ibrahim was undeterred.  In 1998, he set up Celtel, the company provided affordable mobile phones and cell services to millions of Africans in some of the poorest and most corrupt countries in the region, such as Congo, Malawi, Sierra Leone and Uganda.

In our research, we call what Mo Ibrahim did, a market-creating innovation which transformed complicated and expensive products into simple and affordable products, easily accessible to people in the society. phones were expensive before Celtel made them much more affordable, some of his colleagues saw that it was possible to create a successful mobile phone company flooded the market with investments worth billions of dollars which led to significant growth in the industry.

Today virtually every African country has a vibrant mobile telecommunication industry. The thriving sector now supports almost1 billion phone connections and has created over 4million jobs while generating billions of dollars in taxes yearly. These are taxes that the government can re-invest into the economy to build various institutions.

Now, because most people don’t need to bribe public officials to get a phone, corruption, within the industry has reduced. If Mo Ibrahim had waited for corruption to be fixed in Africa before he invested, he will be waiting till today.

Most people who engage in corruption know they shouldn’t. The public officials demanding bribes from people before they give phones and the people who were paying the bribes knew they were breaking the law, but they did it anyway. The question is why the answer is scarcity.

We also complain about civil servants like police officers who extort money from hardworking citizens but most civil servants are grossly underpaid and living desperate lives. For them, extortion is a good way to survive.

I am not saying there shouldn’t be scarcity in society rather I am explaining the relationship between corruption and scarcity. In most poor countries, basic things like food, education, healthcare, economic opportunity, jobs, etc are scarce. This creates the perfect breeding ground for corruption to thrive.

Investing in businesses that make things affordable and accessible to people attacks the scarcity and creates the revenues for government to re-invest in their economies. When this happens at a country-wide level, it can revolutionise nations. For example, in the 1950s, South Korea was a corrupt and desperately poor country ruled by an authoritarian government which also engaged in bribery and embezzlement.

Like some other economies, South Korea was trapped in poverty and they referred to it as an economic basket case. looking at South Korea, its institutions and the leaders in 1980s, the country was at par with some of the poorest African countries at the time. However, companies like Samsung, Kia, and Hyundai invested in innovations that made things much more affordable for so many people.  South Korea ultimately became prosperous. As the country became prosperous, it was able to transition from an authoritarian government to a democratic government and has been able to reinvest in building its institutions which has paid off tremendously.

For instance, in 2018, South Korea’s President was sentenced to 25 years in prison on corruption-related charges, this could not have happened decades ago when the country was poor and ruled by an authoritarian government.

As we look at most prosperous countries today, we realised that they were able to reduce corruption as they became prosperous, not before.

Where does all this leave us? It may sound like I am saying we should just ignore corruption however what I am suggesting is that corruption, especially for most people in poor countries is a workaround. Investing in innovations that make products affordable for many people, not only to attack the scarcity but to create a sustainable source of revenue for the government to reinvest into the economies to strengthen the institutions.

This is the critical missing piece in the economic development puzzle that will ultimately help us reduce corruption.

I lost hope in Nigeria when I was 16. In some ways, the country has actually gone worse.  In addition to widespread poverty and endemic corruption, Nigeria now actually deals with terrorist organisations, like Boko Haram. However, I am more hopeful of Nigeria today than I ever been before. When I see organisations investing in innovations that are creating jobs for people and making things affordable, I am optimistic about the future. I hope you will be too.

A troubled world and threat of coronavirus

Of insurance policyholders, insurance companies and premium payments in Nigeria: Is…

A troubled world and threat of coronavirus

Towards a cost-reflective tariff in the Nigerian electricity…