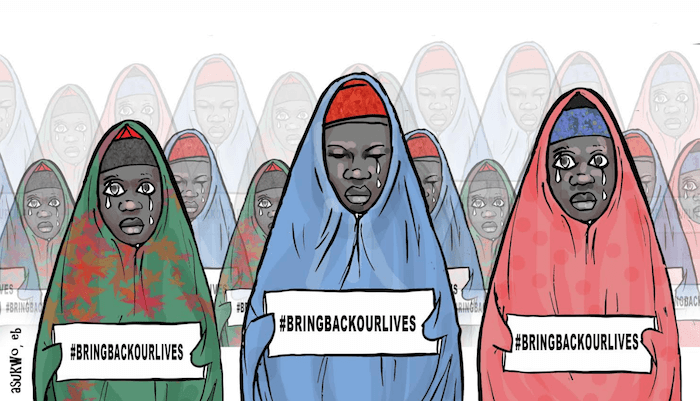 Today, April 14, 2021, marks seven years a jihadist terrorist organisation, Boko Haram, snatched away young school girls from their dormitory beds in the northeast Nigerian town of Chibok; many of them still remain unaccounted for.

The anniversary of the abduction is a reminder that schoolchildren remain vulnerable to attacks and abductions by Boko Haram fighters and other militant groups marauding in the country’s beleaguered northern region.

The lack of information on the whereabouts of the remaining schoolgirls, as well as hundreds of other children abducted from other educational institutions in recent times, underscores the continued suffering of their families and the continued risk of new abductions.

It is unfortunate that Boko Haram continues to prey on women and girls as spoils of war despite claims by the Nigerian government that it has defeated the group. The federal and state governments should make it a priority to protect vulnerable groups from harm.

In April 2014, members of the jihadist group Boko Haram (translated to mean, Western Education is bad) ambushed an all-girls boarding school in Chibok in the middle of the night and kidnapped 276 students before vanishing into the forest.

Some of the girls managed to escape on their own, while others were later rescued or freed following negotiations. But the fate of many has remained unknown.

The Chibok abduction occurred on the same day as a bombing attack in Abuja in which at least 88 people died.

A lawyer in Abuja, the capital of Nigeria, started the hashtag #BringBackOurGirls in a tweet posted on April 14, 2014. It was then used by a group of Nigerian activists protesting about the government’s slow response to the kidnapping to tag tweets.

The hashtag began to trend globally on Twitter as a form of hashtag activism and the story spread rapidly internationally, becoming for the first time Twitter’s most tweeted hashtag.

A $300,000 cash reward was initially offered by the movement to anyone who could help locate or rescue the girls from their kidnappers.

In May 2016, one of the missing girls, Amina Ali, was found. She claimed that the remaining girls were still there, but that six had died. A further 21 girls were freed in October 2016, while another was rescued the next month.

The girls kidnapped in Chibok in 2014 are only a small percentage of the total number of people abducted by Boko Haram.

Amnesty International estimated in 2015 that at least 2,000 women and girls were abducted, many of whom were allegedly forced into sexual slavery.

A child born to one of the girls and believed by medical personnel to be about 20 months old also was released according to close sources.

In addition to the Chibok abductions, the Boko Haram fighters abducted more than 300 from Zanna Mobarti Primary School in Damasak in March 2015 after Chadian forces expelled them from the northern Borno town.

On February 19, 2018, in a brazen operation reminiscent of the Chibok school attack, another set of 110 children were abducted from the Government Girls Science and Technical College, in Dapchi, Yobe State.

While 161 of the Chibok schoolgirls and 101 of the Dapchi girls have escaped or been released through government negotiations, there has been no word from the government about the missing Damasak children or the remaining 112 Chibok girls. Media reports said that the insurgents did not release Leah Sharibu, the only Dapchi schoolgirl still in their custody, allegedly for refusing to renounce her Christian faith for Islam.

In January 2015, less than a year after the 2015 Chibok abduction, in the village of Malari, Borno State, about 40 boys and young men were abducted by Boko Haram.

In December 2020, more than 500 boys were abducted by a group of masked gunmen from a secondary school in Kankara, a town in Katsina State.

Seven days after the incident, 344 boys out of the group were released due to successful negotiations by the Nigerian government.

In February this year, three mass kidnappings occurred at various schools. First incident took place in a school in Borno State where over 40 people, including 27 students were abducted.

The second was on February 25 when gunmen abducted 317 girls from the Girls Science Secondary School in Jangebe, Zamfara State.

In March 2021, another mass kidnapping of 39 students (made up of 23 females and 16 males) took place at Federal College of Forestry Mechanisation, Afaka, in Igabi Local Government of Kaduna State. Many of them are yet to be released.

The ease with which the terrorists carried out these abductions suggests that the Nigerian government has failed to adequately protect school children. It also defeats the government’s avowed commitment to a safe school programme.

The Federal Government announced the Safe School Initiative in 2014 with an initial fund of N3.2 billion ($10m) from government and private donors to ensure a safer school environment for children, especially in conflict areas.

Nigeria also endorsed the international Safe School Declaration in March 2015, as a commitment to ensuring that schools will be able to continue to operate during armed conflict.

In December, the Education in Emergencies Working Group under the Federal Ministry of Education submitted a proposal to the Defense Ministry to amend the Armed Forces Act to ban requisitioning schools or universities to accommodate soldiers.

It is unfortunate that seven years down the line, notable progress has not been made toward rescuing the Chibok abducted children and bringing their abductors to justice. Their families have also been left without adequate support.

The Nigerian authorities need to live up to their commitment to provide a safe learning environment and ensure justice for victims of these abuses.

In a statement announcing a series of actions to mark the seven-year anniversary of the abduction in Lagos, Abuja, New York and Chibok, Akindeji Aromaye, media associate, Enough is Enough (EiE) Nigeria, said: “We, the parents, relations and supporters of the 112 of our Chibok Girls who remain unaccounted for, are disturbed, disconcerted and distressed to know that for seven years, our cries have fallen on deaf ears; for seven years, the children of the rich and elite have grown in opulence and happiness while our beloved girls remain in captivity, forced into lives of unimaginable cruelty and privation.”