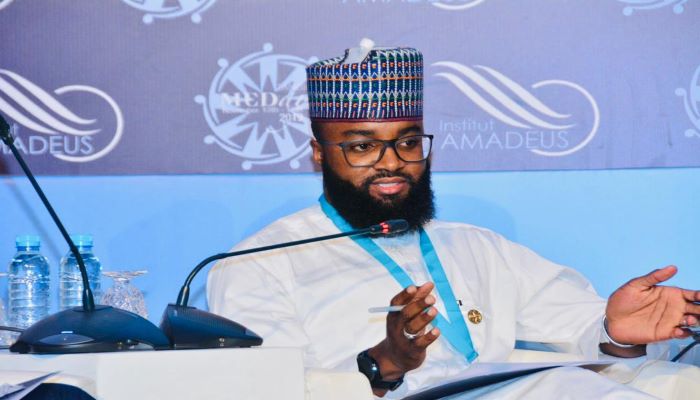 Khalil Halilu, the CEO of on-demand delivery service ShapShap has called on African governments to trust homegrown innovation to address some of the continent’s challenges.

According to him, excellent solutions exist throughout the continents that, if properly harnessed, can address the majority of the continent’s challenges.

Halilu a serial technopreneur and innovator also noted that Africa’s approach to youth empowerment must be dynamic to be able to harness the knowledge and contributions of young people on the continent.

Halilu, who was born on October 29, 1990, in Kano City, Kano State, Nigeria, recounts how he rose from his family-owned businesses, Scirrocco, the tea and cold beverage company, and its sister company Gongoni, which together form a group with 300+ products in Nigerian and African markets, to become one of the big names in Nigerian tech and innovation.

His rich portfolio boasts of founding and co-founding the first eco-friendly tech hub in the whole of West-Africa dubbed, The CANs park, ShapShap on-demand delivery app, OyaOya, the first on-demand commodity marketplace in the whole of Africa, Zabe election monitoring system, Centre For Civic, Citizen’s Welfare And Community Development (CWCD Africa), Gongoni Company Limited and its sister company Scirrocco International Limited which he joined in 2010 as COO and remains on the board of directors till date.

“I attended the Rainbow Primary School in Kano from 1996; and my Secondary School Education at St. Thomas Catholic School (2001-2003) which I completed at Prime College, in Kano (2006),” he said.
“After graduating from high school, I enrolled at the University of Hertfordshire and obtained his Bachelor of Science (BSc) degree in Business Administration in 2009, as well as Master’s degree in International Business in 2010.

“As part of his University course requirements in 2008, I and my team successfully planned and operated a fully functioning business venture in a time frame of just three days.
“Instead of settling for the usual buying and reselling business scheme we took a different route from our competitors and started a gaming centre business that attracted a substantial number of customers in a short time.

“After three days of managing the gaming centre, Khalil we used the profits generated to plan and host an African themed party. I performed as the DJ, and tickets sold out in a couple of hours.

“In the end, my team raised a significant amount of money from the business the most in my class group and even broke the historical record of the university. Which still stands to date
On his career and achievements, he is a born entrepreneur who always wants to find solutions to problems.

He stated that his continuous efforts and willingness to add value to humanity attracted him to technology innovation.

“Before looking at additional value-added solutions, I established a passion for delivering inexpensive yet sustainable technical solutions to agricultural enterprises.
“I am constantly innovating to meet demands.”

In 2018, KSH, as he is fondly called said he started the Center For Civic, Welfare and Community Development (CWCD Africa) a non-governmental organization particularly committed to contributing to Health, Education, Transparency and accountability, Environment and Climate Change, Peace and Security, Sustainability, Inclusive Development, Refugees, Migrants and The Displaced in Africa.
Also Ahead of the Nigerian General Elections in 2019, CWCD Africa launched the Zabe mobile application(Zabe.ng ) a civic tool that sought to deepen democratic participation.

Zabe enjoyed amazing success, hitting more than 3,000 downloads, calculated to 2000% user growth. Zabe was a very useful tool in the 2019 election recording only a 3% difference from the Independent Electoral Commission’s results.

Today, CWCD Africa also collaborated with OSIWA, National Assembly, National Human Rights Commission (NHRC) and National Agency for the Prohibition of Trafficking in Persons (NAPTIP) to launch the UNSUB platform during the lockdown in 2020. UNSUB is a digital platform that connects victims of sexual and gender-based violence to stakeholders working in the space.
Another of Khalil Suleiman Halilu’s works is the CANs park.

The CANs park exists in the heart of Abuja providing Workspaces, technical and strategic consultation, and social innovation matchmaking to startups and Investors from all over Africa.
“I am confident in proffering more localized tech solutions to our tackle some of the challenges we face as a country,” he added.

How Africa can build on COP27’s small wins