Wadume: FG will not shield Soldiers from trials – AGF 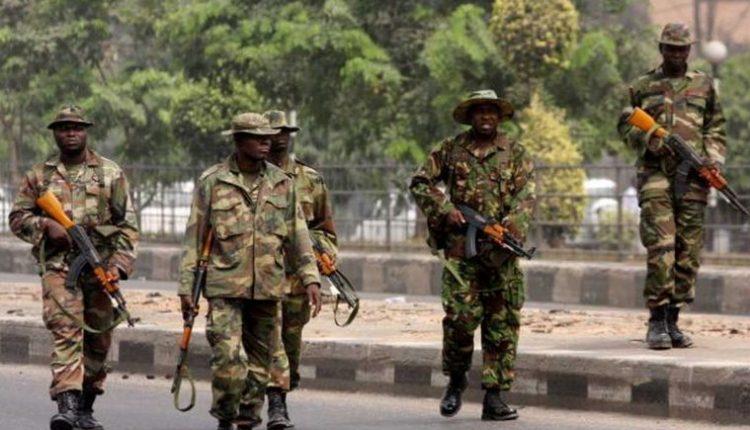 Share
The federal government has insisted that it will not shield Soldiers fingered by allegedly involved in the Taraba kidnap kingpin’s escape , Bala Hamisu, popularly known as Wadume, from trials
The Attorney General of the Federation and Minister of Justice, Abubakar Malami, while briefing State House correspondents after his presentation to the virtual meeting of Federal Executive Council (FEC) presided over by President Muhammadu Buhari in Abuja on Wednesday, said however, government was only giving time to allow the established processes to be consummated.
Malami noted that before the military can release their personnel for prosecution, they must also go through their in-house processes.
The Justice Minister, while commenting on the insinuation that government was shielding the soldiers, denied the insinuation adding that “ it is important for you to note that within the context of the Nigerian law, there are certain provisions that are exclusive to the military within the context of law on court martial and then, the internal discipline associated with the military.
“The soldiers can now be charged before court martial, and then for the military to release their personnel for prosecution, ordinarily, there are in-house processes and procedures that are to be consummated. So those that are handy for the purpose of prosecution cannot be held in custody for unduly longer period of time on the account of the absence of the military.
The AGF explained that his office is empowered under the law to consider matters of justice and public interest while ensuring the absence of abuse of the process.
“So that is how the idea of severing the charge to allow those that are handy to stand their trail arose.
“That does not mean that by any means that the military are shielded and cannot be prosecuted. But if they have to be prosecuted, they have to be prosecuted within the context of the law. What is the law here? They are military personnel, first they are to go through the in-house processes.
“There are two options, either to charge them before the court martial which is a special court established by law for the trial of soldiers or in the  alternative for the military after consummation of the in-house processes should consider handing them over for trail.”
He added: “On Wadume’s case, I will like you to note for the record that it’s the office of the attorney general of the federation that is constitutionally established to consider an interest of justice and public interest as well as ensure the absence of abuse in the judicial process.
“Within the context of public interest and the interest of justice, what we consider by way of fair hearing is that people that are charged to court are entitled to fair hearing, judicially determined within a reasonable time.
“Then, where people are charged multiple times on account of one reason or the other, they cannot collectively be brought before the court for arraignment on account that others are at large. Those that are available are entitled to have their case determined within a reasonable time.
“So, what has happened is perhaps a delay for a limited time to allow the processes recognized and realized by law to be consummated as it relates to the prosecution by the military as recognized by law and not in any way to intended to accord them protection in order to prevent them from being presented before the court. I hope that is clear.”
Wadume is facing a 16-count charge bordering on terrorism, murder, kidnapping and gun-running along with Captain Tijjani Balarabe and 18 others.
Also on the list of defendants are Staff Sgt. David Isaiah; Sgt. Ibrahim Mohammed; Corporal Bartholomew Obanye; Private Mohammed Nura; Lance Corporal Okorozie Gideon; Corporal Markus Michael; L/Corporal Nvenaweimoeimi Akpagra; Staff Sgt. Abdullahi Adamu; Private Ebele Emmanuel; ASP Aondona Iorbee and Inspector Aliyu Dadje and Auwalu Bala, aka Omo Razor.
Share