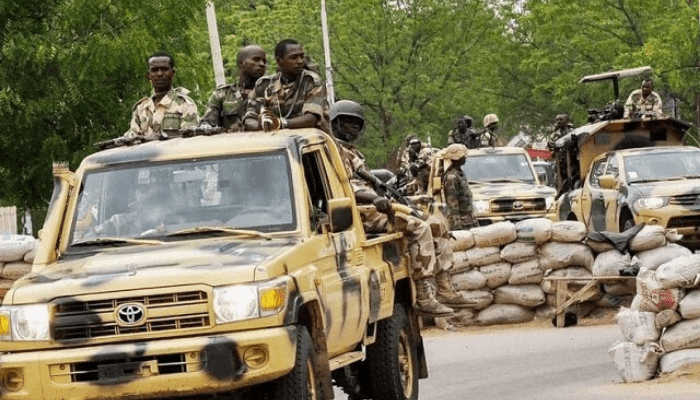 Two soldiers have been killed while others sustained injuries, in an Improvised Explosive Device (IED), explosion, during an ambush by Boko Haram terrorists in Gujba Local Government Area of Yobe State.

The coordinator explained that the troops of Combat Team 1, Operation Kantana Jimlan on long-range admin patrol along Buni Yadi – Buni Gari axis encountered multiple Improvised Explosive Devices and Boko Haram Terrorists’ ambush, eight kilometers ahead of Buni-Gari in the State on the 18 of May 2020.

“Two soldiers paid the supreme price and three other soldiers sustained injuries as a result of the IED explosion. Three terrorists were killed while an unconfirmed number escaped with various degrees of injury,” he said.

He said a recovery truck, one troops carrying vehicle and a water tanker that ran into the IED were destroyed by fire.

The coordinator disclosed that due to mental snap/distress occasioned by fog of war, two of the soldiers who escaped the IED and terrorists’ ambush recorded the incident with uncomplimentary remarks, about the Nigerian Army and her leadership, which was released on the social media.

Enenche said though the outburst is expected in war, the soldiers involved have been identified and would undergo observation and counselling.

Meanwhile, the Air Task Force (ATF) of Operation Lafiya Dole has destroyed some compounds in Njimia on the fringes of the Sambisa Forest, where the terrorists keep their logistic items.

According to Enenche this was achieved through airstrikes executed yesterday, 19 May 2020, following credible intelligence reports as well as series of Intelligence, Surveillance and Reconnaissance (ISR) missions that led to the identification of the nondescript cluster of structures within the settlement that were being used by the terrorists to house their fuel and other logistics.

“Accordingly, the Air Task Force dispatched an appropriate Force Package of attack aircraft and a surveillance platform to take out the target.

“The Nigerian Air Force (NAF) attack assets scored accurate hits in their bombing runs on the target area, completely obliterating the logistics stores as well as causing damage to several other BHT structures in the settlement,” he said.

We have sung gas to power, now it is gas to people – Auwalu