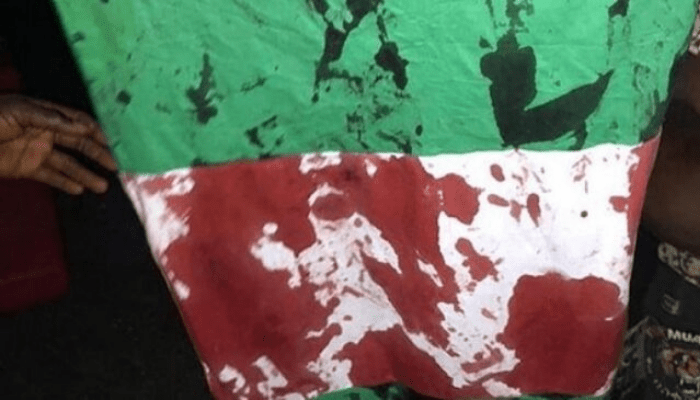 A two-week old peaceful protest by Nigerian youths against police brutality is fast spiraling out of control with about 100 people dead.

Yesterday, the protests turned more deadly as many unarmed people were shot in the Lekki axis of Lagos State, the sprawling commercial capital of the country, by the Nigerian military.
78 people are reported to have died and scores injured, according to multiple eyewitnesses including popular Nigerian Disc Jockey, Obianuju Catherine Udeh, professionally known as DJ Switch.

The ugly incident which has been condemned worldwide started after the peaceful protesters defied a government curfew. The Nigerian Army has denied involvement in the shooting despite videos showing men wearing uniforms shooting sporadically at protesters.

Many states, from Lagos, Edo, Ekiti and Ondo in the South to Abia State in the East, have all announced 24-hour curfews as they try to control the protests from spiraling into anarchy. Curfews in some areas haven’t worked as the protesters remain defiant.

The following pictures show how the protest is evolving across Nigeria. 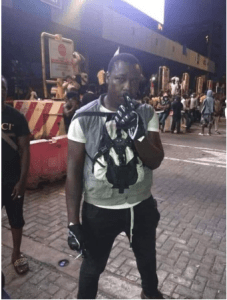 One of the protesters at the Lekki Toll gate who was later killed in the heat of the gunshots fired at the peaceful protesters by security forces at around 7pm. 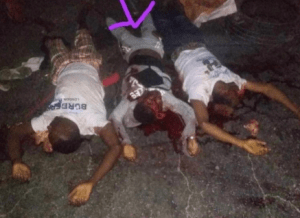 The body of the man in the first picture (in the middle) alongside two other protesters killed in the aftermath of the shooting last night which has continued till this morning according to eyewitnesses. 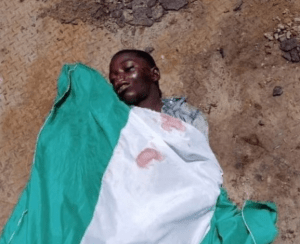 The body of one of the protesters killed from the shooting at Lekki. 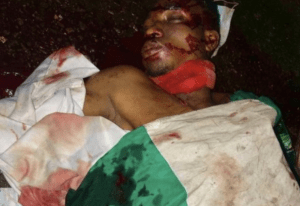 Another lifeless body at Lekki. 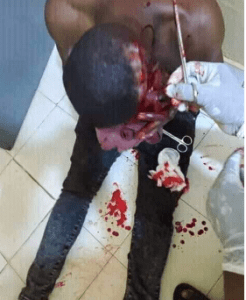 One of the injured protesters is receiving medical attention at Vedic Lifecare hospital in Lekki. 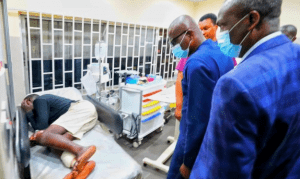 One of the several protesters injured by gunshots and receiving healthcare covers his face as Lagos State Governor Babajide Sanwo-Olu visits injured protesters at the General hospital in Lagos Island this morning.

There are currently 10 patients at the General Hospital, 11 at Reddington hospital and 4 at Vedic hospital with mild to moderate levels of injuries while 2 are receiving intensive care. The Lagos state government is footing the bill according to Sanwo-Olu. 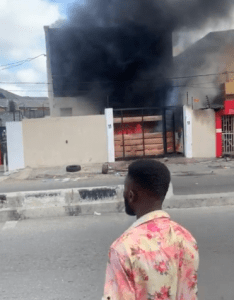 Governor Sanwo-Olu’s mother’s residence was set ablaze by unidentified persons Wednesday morning. She is reported to have been evacuated before the burning. 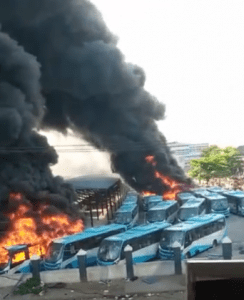 The BRT terminal at Oyingbo was set on fire Wednesday morning as angry youths burned the government-owned buses within the terminal. 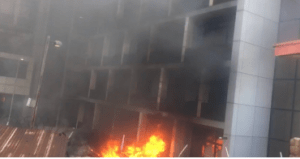 The office of the Nigerian Ports Authority (NPA) in Apapa has also been set ablaze by hoodlums Wednesday. 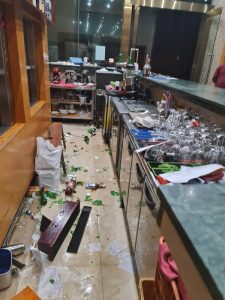 Oba of Lagos rescued as palace is attacked by angry mob 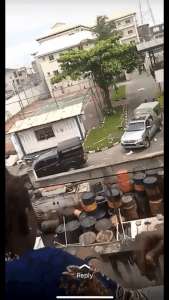 A team of armed soldiers on Wednesday morning rescued the Oba of Lagos, Rilwanu Akiolu, from angry protesting youth who invaded the palace and attempted to burn it down. 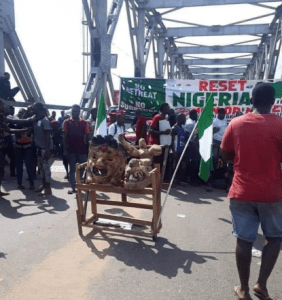 The bridge is a border link between Anambra and Delta states.
The protesters are holding a Nigerian flag with inscriptions on it.
A part of the flag reads “No retreat, no surrender.” Another reads “Reset Nigeria.”

In the name of Saifullah 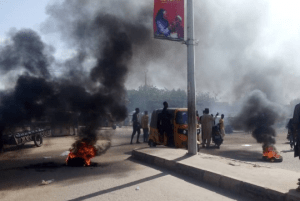 Protests are also ongoing at the Kofar Mata area of Kano following the death of Saifullah – a 17-year-old who died in police custody on Monday.
The protest erupted after it was learnt that Saifullah was allegedly tortured to death by the police, according to reports by Amnesty International. 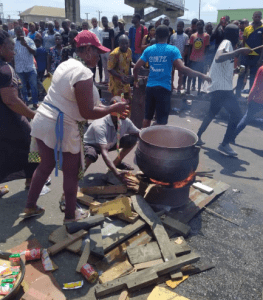 Image from Apapa-Oshodi Express in Lagos which is completely blocked by peaceful protesters cooking in the middle of the road.
Apapa is home to the country’s busiest seaport.
It is also the site of a major container terminal which was owned and operated by the Federal Government of Nigeria until March 2005, and now is operated by the Danish firm A. P. Moller-Maersk Group. 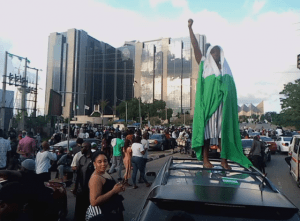 Later that night, the heavy downpour of rain could not stand in the way of protesters at the CBN. 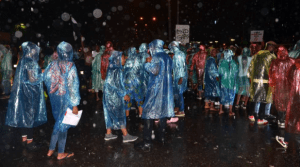 At Ikeja Aalong bus stop in Lagos, protesters barricade the road and would not let vehicles go through. Not even motorbikes.
Ikeja is the capital of Lagos and is home to several businesses including the popular computer village, where large swaths of small shops sell mobile phones and other devices from laptops to electronics. 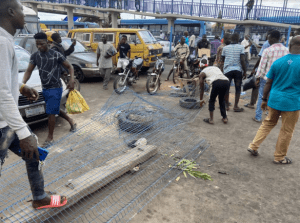 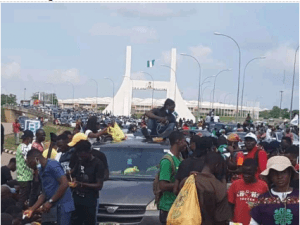 The Lagos airport has also been blocked for days.
Domestic and international airlines have been forced to cancel their Lagos bound flights following the 24-hour curfew imposed by the Lagos State Government with effect from 4pm on Tuesday. BusinessDay’s checks show that although the airspace is not shut down to essential flights, airlines have had to cancel flights and reschedule. 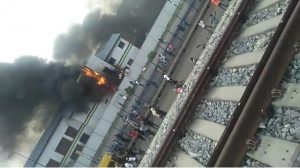 A police station in Orile Iganmu in Lagos was set ablaze by hoodlums amid the protests. The incident occurred around 09.45 am, Tuesday, according to an eyewitness who said that policemen shot at the hoodlums before they set the police station ablaze.

Bubu has been a bad boy 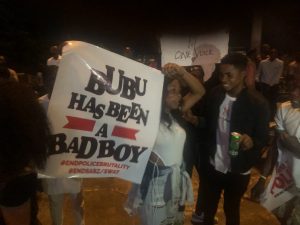 Protesters at the second Lekki-Epe express toll gate hold placards saying President Muhammadu Buhari, who they refer to as “Bubu” has been a bad boy. The protesters have extended their road block of the Lekki phase 1 toll gate to the second toll gate after Chevron. They seem to be in high spirits as well. 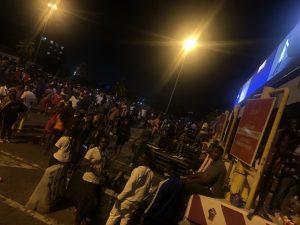 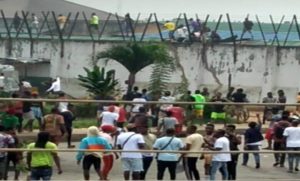 Hoodlums organized a jail break in Benin and Oko prisons on Monday according to the Nigerian Correctional Service (NCoS).
The hoodlums, numbering over 100, broke open one of the cells and freed inmates in the process. Several people sustained gunshot injuries as an armed squad of prison officials engaged the suspected hoodlums in a gun duel.

Edo curfew goes unheededThe Edo state government announced a 24-hour curfew on Monday in an effort to restore calm in the state.
The curfew which was supposed to commence at 4pm Monday however went unheeded in some parts of Benin as the image below shows. 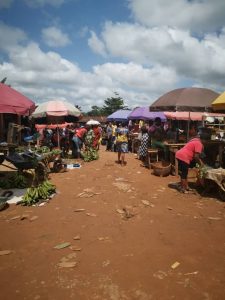 Traders at Ogba market in Oredo local government in Benin were out and about on Tuesday despite the curfew imposed by the state government. 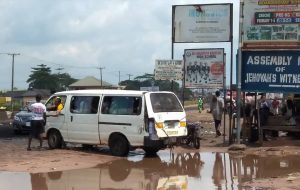 The image above shows a loaded commercial bus in Benin with people going about their business despite the curfew in the state. 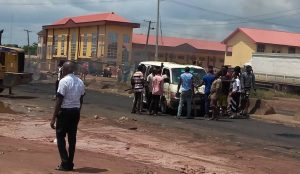 Images of more suspected hoodlums leaving vandalized properties in their wake as they race through the Benin-Agbor road in Benin city, disregarding the state-imposed curfew. 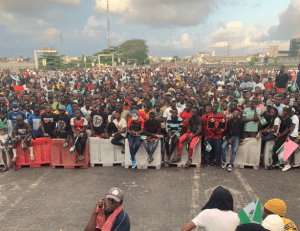 Protesters at the Lekki toll gate remain defiant at around 6pm on Tuesday despite the government imposing a 24-hour curfew that kicked off two hours before. This was before the sporadic shooting by security forces later that day.

The busiest inter-state route in Nigeria just got busier 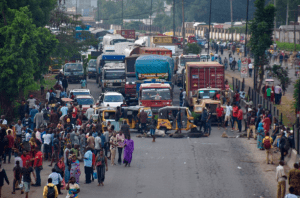 Several people have been stranded as protesters shut down the Lagos-Ibadan expressway for over two days now.

The Lagos–Ibadan Expressway is a 127.6-kilometre-long expressway connecting Ibadan, the capital of Oyo State and Lagos, Nigeria’s largest city. It is also the major route to the northern, southern and eastern parts of Nigeria.

The expressway is the busiest inter-state route in Nigeria and handles more than 250,000 PCUs daily and constitutes one of the largest road networks in Africa.

The expressway was barricaded by dozens of youths on Tuesday who blocked various junctions including the Ojoo end of the Expressway in continuation of the #EndSARS protests rocking the country.

Trapped in the office

The entrance to the Lagos state secretariat in Alausa was blocked on Monday by protesters who locked government staff within the premises.

The Governor’s office is also within the secretariat.