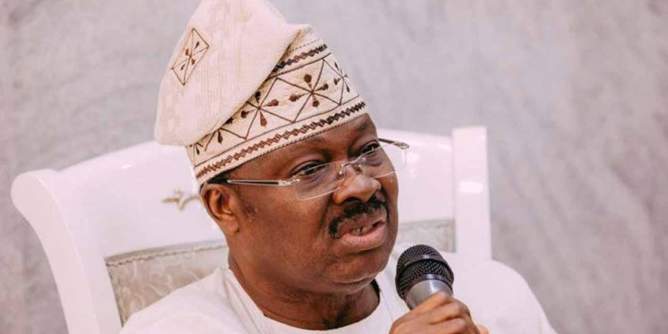 Youth and Sports Development Minister Sunday Dare, Former Deputy President of the Senate, Senator Ike Ekweremadu and Senator Abdulfatai Buhari on Thursday expressed shock over the death of immediate past Governor of Oyo State, Abiola Ajimobi who passed away on Thursday at age of 70.

According to Dare, “The passing of my elder brother, Sen. Abiola Ajimobi, is both untimely and tragic. He served the good people of Oyo for so long. We wanted him to use his experience to guide us through trying times. Sadly, dusk came too early and we must bid goodnight. Sun re, Aare of Ibadan!

“My prayers and thoughts are with the family, and the good people of Oyo State. His death is numbling saddening, but we must submit to the will of God who gives life and takes it when he wills.May his soul rest in peace,” Dare concluded.

Ajimobi reportedly died following his admission in a Lagos hospital due to complications from an undisclosed ailment.

He was a two term Governor of Oyo State under the APC.

He was named as the Caretaker National Chairman of the ruling APC following the suspension of Adams Oshiomole by the Court of Appeal.

Also, Ekweremadu, expressed sadness over the demise of the former governor of Oyo State, Abiola Ajimobi, describing it as a grave loss to the nation.

Ekweremadu, reacting to the sad development, described the former governor as a bridge builder and pan Nigerian, adding: “I received with a deep sense of loss the passing on of my friend, brother and colleague in the fifth Senate, Distinguished Senator Isiaka Abiola Ajimobi.

“He was an accomplished public administrator, legislator per excellent, pan Nigerian and bridge builder.

“As a grandson of a former chief in the revered Ibadan royal court and scion of former member of the defunct Western Region House of Assembly, Ajimobi brought his rich political background to bear in his service to his people and the nation as a whole.

“He no doubt excelled in political engineering and mobilisation and will forever be remembered as a jinx breaker, being the first to be reelected for a second term in office as Governor of Oyo State.

“Even in death, he is not diminished. Although he lost the protracted battle for his life, it will always be said of him that he came, he saw, and he conquered”.

Likewise, Buhari who represents Oyo North Senatorial District at the Senate, described the death of Ajimobi as a bitter pill that cannot be easily swallowed.

Buhari, who served as a special adviser and a commissioner under the late governor, said he received the news of the death of Ajimobi with disbelief “because I was hopeful that he would come back to us alive.

“I have lost a brother, benefactor and political leader. It is, indeed, a sad moment. We can only pray to the Almighty Allah to forgive his sins and comfort us.”