Russia-Ukraine war: US tops list of biggest donors of military aid to Ukraine

A report from the Kiel Institute for the World Economy has revealed that the United States of America tops the list of the biggest donors of military aid to Ukraine.

The report that compiled the list of donors of military equipment to the Kyiv government noted that the monetary and military donations were for the period of January 24, 2022, to November 20, 2022. According to the report, which was released on December 8, the value of the largest military donation ever made by the United States was $18.51 billion. The Biden-led administration’s support comes as it applies all direct and indirect pressure to prevent Moscow from overpowering the Volodymyr Zelenskyy government.

“These weapons have been used to preserve Ukraine’s territorial integrity, secure its borders, and improve interoperability with NATO,” the U.S. government report stated.

In May, the U.S. Senate overwhelmingly approved $40 billion in new aid for Ukraine, sending the bill to the White House for President Joe Biden to sign into law as Washington races to keep military assistance flowing nearly three months after Russia’s invasion, a Reuters report said. 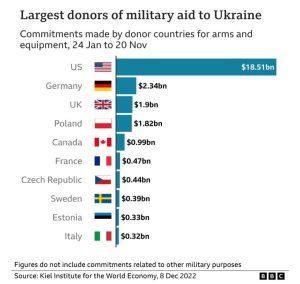 The Senate voted 86–11 in favour of the emergency package of military, economic, and humanitarian assistance, by far the largest U.S. aid package for Ukraine to date. All 11 no-votes were from Republicans.

Other major donors to the Ukrainian war effort against Putin’s ambition of creating a modern Soviet empire, which now includes Belarus, are Germany with $2.34 billion, the United Kingdom with $1.9 billion, Poland with $1.82 billion, Canada with $990 million, and France with $470 million, respectively. The others to make up the top ten donor list are the Czech Republic with $440 million, Sweden with $390 million, Estonia with $330 million, and Italy with $320 million.

Ukraine has been able to defend Kyiv from Putin’s aggressive attacks thanks to the support of these countries, taking up territories occupied by Russia and providing a formidable defence against further Russian aggression.

According to the Washington Post, before the war, Moscow controlled about 17,000 square miles of Ukraine’s land, split up into Crimea (annexed by the Kremlin in 2014) and the separatist-controlled areas of Donetsk and Luhansk.

By the end of the fourth week of the war, Russia controlled the most land since its invasion, about 51,000 square miles, or 22 percent of Ukraine. In the United States, this percentage would be the equivalent of the entire Midwest and some more.

As of Nov. 17, Russia controlled some 40,000 square miles of Ukraine, mainly in the east and south. That’s about 17 percent of the country, the lowest percentage controlled by Moscow since April.