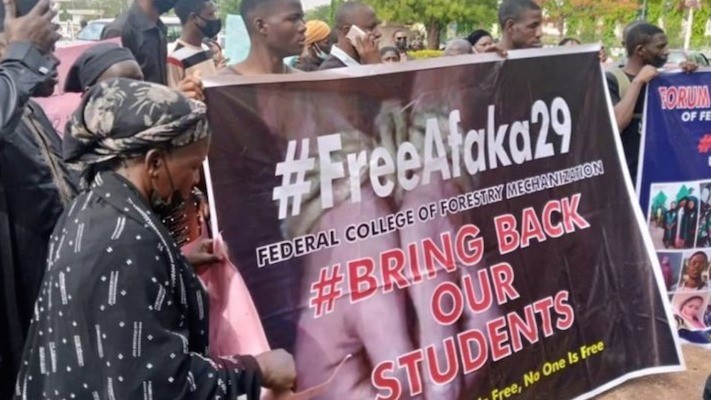 Parents of abducted students of College of Forestry Mechanisation, Afaka in Kaduna State, on Tuesday staged protest at the National Assembly complex in Abuja, demanding the safe return of their children and end to rising insecurity in the country.

Bandits dressed in military uniform had on March 11 abducted 39 students of the college in their hostels, freed 10 of the students and are still keeping 29 of them in captivity.

The aggrieved parents and the college Students Union Government (SUG), were joined by some activists, including Omoyele Sowore and Deji Adeyanju, who earlier gathered at the Unity Fountain from where the protesters marched to the National Assembly.

Security operatives manning the main entrance of the National Assembly denied them entrance, and they receded back to Unity Fountain, chanting solidarity songs and displaying placards with various inscriptions: ”Education is our right! Safety is our right! Freedom is our right!, Free Afaka 29!.”

Speaking at the resumed of plenary, speaker of the House of Representatives, Femi Gbajabiamila directed the chairmen of the House committees on defence, army, navy and air force to vacate the chamber and address the aggrieved parents.

Chairman House committee on defence, Babajimi Benson who returned an hour later was asked by the speaker to brief the House on what happened.

Benson said upon getting to the gate of the National Assembly, the protesters had left and he went to the Unity Fountain to meet them, and on getting there, the aggrieved parents looked depressed, suppressed, and dejected.

He said: “They feel they have been abandoned and have not eaten for two days. They don’t have any hope, the only hope they have is on the parliament. They sent us back to you to plead with you that their plight on their missing children be addressed. They also requested that we speak on behalf of the children that were kidnapped, and those of the Greenfield University.”

Gbajabiamila expressed sadness over the incident and assured that the grievances of the parents would be referred to the newly constituted ad-hoc committee on security to proffer solutions.