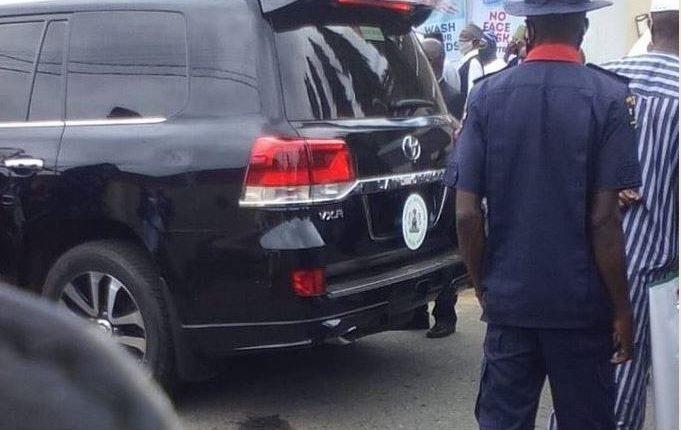 The family had announced the fidau prayer as a private programme, urging the public to watch through virtual channels including Zoom, YouTube and Facebook.

But there had been accusations and counter-accusations that have trailed the handling of the burial of the former governor.

Also, it was alleged that the Oyo State Government refused to allow Ajimobi to be buried on a land under contention between the two parties.

The late Ajimobi had in February 2020, sued Makinde over the revocation of his landed property at Agodi Government Reservation Area in Ibadan after the state government claimed the property violated the land use act.

However, the deputy governor who arrived the late Ajimobi’s residence at about 11:20 am in a convoy of five vehicles was stopped by policemen and members of other security agencies manning the gate leading to the estate.

The security agents insisted that only the deputy governor’s vehicle could be allowed into the street to join the prayer.

The deputy governor’s vehicle was eventually allowed to go in but on getting to Ajimobi’s house, the gate was locked.

The deputy governor’s aides introduced him but they were told that the gate had been locked, and that Ajimobi’s wife was allegedly in possession of the key.

According to him,the Deputy Governor arrived after the prayer had started adding that the event was strictly a family affair.

“There was a need to comply with the Covid-19 protocol as established by NCDC- Social distancing, not more than 30 people in a place and seats arranged, accordingly. After which the gate was shut”.

“No one was aware that the Deputy Governor was coming as neither the advance team nor the protocol informed us. By the time we got to the gate to usher him into the sitting room, he had left. Everything happened within a spate of 10 minutes”

“Through a serving Senator and a former Attorney General we tried to get in touch with him that it was not to slight him and he could sit in a private sitting room provided by the family. Unfortunately, he had left. We however apologise to his Excellency” the statement added.