Oyo Approves Funds for Take off of Amotekun, re-accreditation of Adeoyo Maternity as Teaching Hospital approved 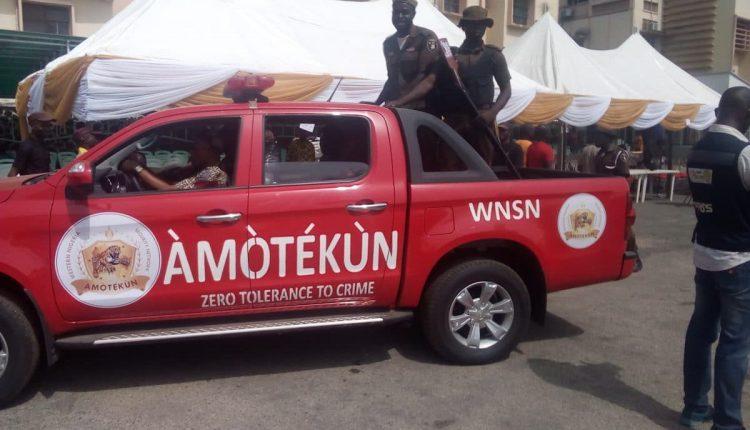 For effective take off of the Security Network, codenamed ‘Operation Amotekun’, Oyo State Government on Tuesday approved the sum of N59.783 million as grant for the outfit.

The fund is for the procurement of 3000 units of uniforms, combat boots, lanyard, baseball hats, security belts and worsted socks.

It will also cover the production of logo for the personnel to serve as identity and distinguish them from other security agencies in the State.

The Commissioner for Information, Culture and Tourism, Wasiu Olatunbosun, disclosed this after the state’s 19th virtual executive meeting, where the executive council approved

Disclosing the outcome of the meeting, the commissioner said “further on the establishment of the State Security Network, codenamed ‘Operation Amotekun’ and for effective take off of the agency, the State Executive Council has approved the procurement of 3000 units of uniforms and accoutrements such as combat boots, lanyard, baseball hats, security belts, worsted socks, production of Amotekun and Oyo State logo for 3000 Amotekun corps to be recruited into the agency”

“The uniforms and accoutrements which will be given to each recruited Amotekun Corp will serve as a form of identity for the corps and will distinguish them from other security agencies in the state.”

Olatubosun further stated that the council also approved funds for re-accreditation of Adeoyo Maternity at Yemetu in Ibadan as a full fledged teaching hospital, as the accreditation initially gotten was withdrawn for failure to have necessary equipments in place, saying it was in conformity with the present administration’s passion to revitalise the health sector in the State.

He said the hospital would henceforth serve as residence training and gynaecology centre to add value to the iconic health institution and improve the image of the State, adding that the move would lead to procurement of medical equipment for the teaching hospital at the cost of 75.877 million

The equipment to be procured includes six hydraulic delivery beds, two theatre electronic/automatic tables and one Laparoscope plus one hysteroscope. Others are one Colposcope, two CTG, two Ultrasound, four Angle Poise Lamps and one bowl anaesthetic machine.

“Summary of the equipment for re-accreditation of Adeoyo Maternity Teaching Hospital at a total cost of N75,877,600.00, the facility is expected to be ready for reaccreditation before the end of the year 2020.”

The Commissioner also informed journalists that the State government, through the Executive Council, has keyed into the federal government’s preparation for a long-term plan tagged “Nigeria Agenda 2050” and a medium-term national development plan 2021-2025 which he said would succeed the Vision 20:2020 and the Economic Recovery and Growth Plan (ERGP) 2017-2020.

He said the decision is consistent with the development process as obtained in countries like China, South Korea, India and Malaysia. He hinted that preparation for the State Plan 2021-2041, the Medium-Term Expenditure Framework (MTEF), Medium Term Sector Strategy (MTSS) and Medium-Term Budget Framework (MTBF) would commence from August 2020 and span a period of 133 days at a total sum of N83,571,725.00.

The University of Ibadan Ventures Limited (Consultancy Service Unit) has also been appointed as the consultant to support the process.

“The plan is to emphasise on the development agenda of the current administration as encapsulated in the Roadmap to Accelerated Development of Oyo State.”

“In line with best practices, the State would adopt an all-inclusive and participatory approach to preparing the home grown State Development Plan.

“In order to enhance the broad-base ownership of the implementation of the Plan, key stakeholders with include all MDAs, Local Government Areas, Local Council Development Authorities, Civil Society Organizations, the Academia, Research Institutions, DAWN Commission, Development Partners like UNICEF, DFID-PERL among others.”