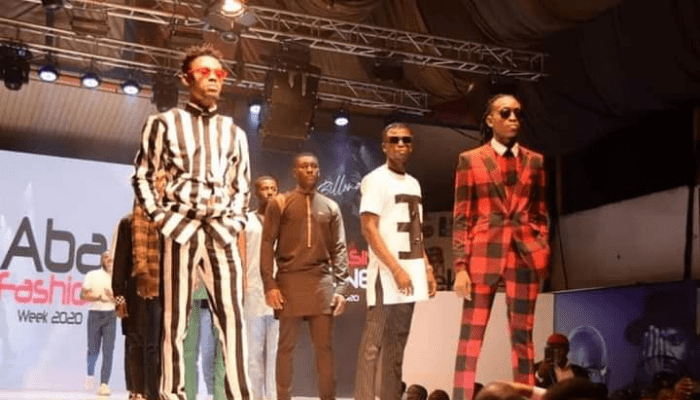 Over 200 fashion designers and models are converging on Aba, the commercial hub of Abia State in December, 2021, to participate in this year’s “Aba Fashion Week, the second in the series.

The event, which will run from December 6 to December 10, 2021, would feature an exhibition, street fashion show, a master class and a runway show.

Sam Hart, director-general, Abia State Marketing and Quality Management Agency, who announced plans for the event at a press conference, in Aba, explained that “Aba Fashion Week” is a franchise, owned by the Aba Creative Collectives, an assemblage of young enterprising entrepreneurs, who elected to themselves to showcase the ingenuity of Aba fashion designers to the world.

He, however, noted that Abia State Government bought into their creative ingenuity, which gave birth to Aba Fashion Week.

Aba, the commercial hub of Abia State, has one of the largest concentrations of micro, small and medium enterprises (MSMEs) in Nigeria and a bulk of this number are engaged in leather works and garment making, which could be attributed to the popularity of the city.

The ingenuity of Aba artisans, especially, the garment and leather clusters-comprising of shoe, belt and bag makers, attracted the United Nations Industrial Development Organisation (UNIDO) in partnership with the Federal Government, to set up a Common Facility Centre (CFC) in the city, to support the clusters to further develop their skills.

Luxury City Entertainment Villa, is the venue for the event, which also hosted the maiden edition, according to Hart.

“This is where our models will be camped. Last year, we had almost 50 models, who were camped here for about a week, preparing and rehearsing for the event. And of course, our secretariat was also domiciled here.

“So many people came in from Lagos and other parts of the country to ensure the success of the event. It was a five-day event. We had an exhibition of goods and services in Aba. We had fashion designers, shoemakers, artists and all kinds of entrepreneurs; all took boots at the exhibition stands.

“They sold out everything they came with and made new contacts. It was a logistically tasking endeavour and we will improve on what we did last year and give you an even better show this year.

“The governor was there, we had guests from outside of the state, we had Mai Atafo, one of the biggest names in the African fashion industry, and we had Noble Igwe, who is our brand ambassador, among others. They want to also be part of his year’s event, as they have been calling to get information.

“We also had sponsors last year and they are also requesting to be part of what we are doing this year. We are the beautiful bride, they are courting us”, he stated.

He thanked everyone that played a role last year that ensured the success of the event, particularly Cosmos Ndukwe, the chief executive officer of Luxury City Entertainment, for his support and assistance throughout the event.

Ugomdi Ogbonna, creative director, Toskyme House of Fashion and a director in Creative Collectives, who reeled out the programmes, said all exhibitors would assemble at the Sugarland pavilion on December 6, which is the kick-off date, while the exhibition starts on December 7.

He also announced a 50 percent discount on all goods at the exhibition ground.

Wednesday will feature a street fashion show, while the master class will be held on Thursday.

The essence of the master class is to bring those ideas that Aba designers need to improve themselves and take their crafts to the next level, Ogbonna stated.

“On Friday, which is the final day of the event, we will have blue and red carpets and a runway show. We will also have a reigning music star to perform at the grand finally. Last year, we brought Chike and we would bring another reigning music artist to entertain guests”, he said.