Vice President Yemi Osinbajo on Wednesday decorated the new acting Inspector General of Police, Usman Alkali Baba, with his new ranks, urging the acting IGP to restore public confidence in the police by building the broken down bridges which had seen the police being at the receiving end of terrorism attacks and social upheavals.

Osinbajo minced no words when he told the acting IGP that “there is no question at all that there is a lot that needs to be done”.

“There is a lot of work that needs to be done. Under your leadership, the police must now rebuild in some ways also the broken bridges of trust to the public and regain the confidence of the citizenry,” Osinbajo said.

He advised that the entire police force and indeed all the senior members of the police force take responsibility for the continual process of rebuilding trust with the Nigerian people.

“One of the ways you can do this is by implementing the community policing policy which had already taken off and reconceptualizing policing as a task carried out in partnership with local communities and by officers who are members of these localities,” Osinbajo said.

“Under your leadership, the force must live up to all of the highest standards of professional conduct and compliance with the rule of law. It must significantly improve the welfare and working conditions of its officers while rapidly scaling up on its forensic, logistical and operational capacities.” 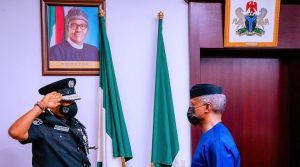 The vice president noted that for the police to meet today’s challenges, it “must stamp out the excesses and abuses and the culture of impunity demonstrated by some elements of the force which provoke public outrage against the institution”.

“In short, your mission is nothing less than the restoration of dignity and high repute of the policing professional and the continuous oiling of that machinery of the police force that enables it to be one that is respected by the populace and by the international community,” he said.

He noted that the new acting IGP has a testimony of very high pedigree in his career and assured him that the Buhari administration stands ready to work with him to reposition the NPF and take it to unprecedented heights of professionalism, competence and excellence.

“I therefore welcome you as a key partner to this administration’s comprehensive programme of reform aimed at repositioning the Nigeria Police Force as a modern, responsive and citizen-centred law enforcement service.

“We all expect that you will justify the confidence that Mr. President has reposed on you, enable you to lead the force in these times. I congratulate you once more on behalf of Mr. President and his cabinet. I wish you all the very best in your tenure,” Osinbajo said.

The acting IGP, in his first public statement on his appointment, assured that he would work to improve on where his predecessor has left off.

“My predecessor has left at the theoretical stage, we have started practicalising it but we have not gone far and, therefore, all the methods of practicalising it has been put in place and we are going to continue with it in collaboration with other stakeholders,” he said.

Alkali Baba noted that he recognizesd that he came in at a very challenging time, saying he would rejig the operational strategy of the police.

“Definitely, we are going to rejig our operational strategies. Nigerians should expect improvement on the security situation. And Nigerians should also collaborate and cooperate with us. With all the inadequacies we have, we still require everybody to be part of policing in this country,” baba said.