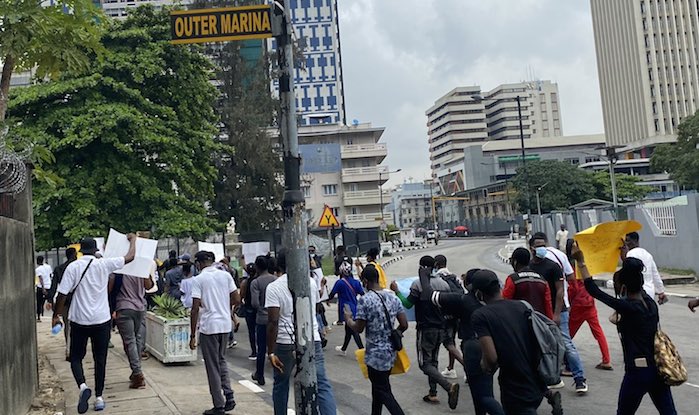 As confusion continues to trail the ongoing #EndSARS protest, the calls by Governors of Northern states on Thursday kicking against the recent disbandment of the Federal Special Anti-Robbery Squad (SARS), has been described as “ belated”

Former Commissioner of Police at the Federal Capital Territory, FCT, Lawrence Alobi, in a telephone chat with BusinessDay in Abuja, who stated that call has the capacity to inflame passion , however urged President Muhammadu Buhari not to succumb to pressures to reverse the decision

“ We can only advice the Northern Governors to accept the new Police Unit created out of FSARS, and the President not to succumb to pressures and reverse the decision

Alobi who noted that the Governors may be speaking from their experience with the operation of Federal Special Anti-Robbery Squad (SARS) in the north, however noted that the envisaged reforms will benefit all parts of the country, positively.

“ We need a Citizen friendly Police Force, just as we need a Police friendly public. So, they should accept the position of the Federal government, since the new police that will emerge will benefit every part of the country, positively”

Alobi also called on the Inspector General of Police, Mohammed Adamu to focus on rebuilding a more vibrant Police Force that is “ well trained, equipped and professionally efficient”

The Chairman of the Northern Governors Forum and Plateau state Governor, Simon Lalong, had on Thursday led other Northern Governors to submit their position, opposing the disbandment of the Federal Special Anti-Robbery Squad (SARS)

Lalong stated that the disbandment did not receive their approval adding that the Special Anti- robbery Squad has been useful in the fight against insecurity in the region.

Lalong, while fielding questions from State House Correspondents after a meeting with President Muhammadu Buhari in Abuja on Thursday, insisted that the region is against the scraping of SARS, despite President Buhari’s approval of the scrapping of SARS

He said the northern states do not believe that the baby should be thrown away with the bath water.

He disagreed with claims that SARS was made up of bad elements, adding that ” it is also included personnel who were doing their work diligently”

The governor said what is needed is the reformation of the unit to enable it to discharge its functions optimally.

He, however, acknowledged that there are divisions in the country concerning the continued existence of the unit.

Lalong, who said he was in the Presidential Villa to commend Buhari for approving community policing of which training has commenced in earnest in the various zones of the country.

N14 billion lost as a result of Tiv, Jukun crisis in Taraba – Justice…