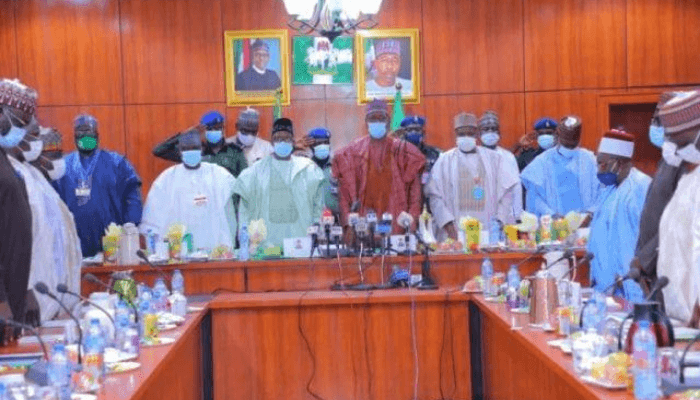 Governors of Nigeria’s north-eastern states on Monday urged the Federal Government to fast-track oil exploration, as well as address the deplorable economic situation and failing infrastructure on the back of the intractable security challenges facing the region.

The governors made the requests at the meeting with President Muhammadu Buhari and heads of security agencies at the Council Chamber, Presidential Villa, Abuja.

Speaking with State House Correspondents after meeting Buhari, Zulum listed the key challenges in the region to include “insecurity, decaying infrastructure especially road projects and the issue oil exploration in the region, as well as enhancing the river basin development in the region”.

The governor said there is a war against the region’s economy.

“So I think the government is taking a bold step with a view to ensuring speedy resolution of some of the gray areas that we have in the region,” he said. “That is the main reason why we met Mr. President.”

According to Zulum, “Government of the region has commended the efforts of federal government in securing the region.

“However, we told Mr. President that there is a need for the federal government to address the causes of insurgency, which are not limited to the endemic poverty, hunger among others.”

The governors lamented the lack of access to farm lands by the local community, adding that “the people need to go back to their farmlands, people need to be resettled in their original homes so that they can restart their means of livelihood”.

“This is one of the reasons the insurgents are recruiting more into the sect and therefore creating enabling environment will enable the people to go about their normal duties,” he said.

Zulum posited that such action will no doubt reduce the cases of insurgency.

“We also recommended that police should be empowered and provided with a certain state of the art equipment, such as armoured personnel carrier and so on with a view to bridging the manpower gap that we are having in the Nigerian military.”

Speaking on the recent attack on his convoy, Zulum revealed that series of consultations had taken place after the attack

” I think security is not only about federal government, there is need for the federal, States and the local government to come together with a view to profiling solutions that will end this crisis in the region.