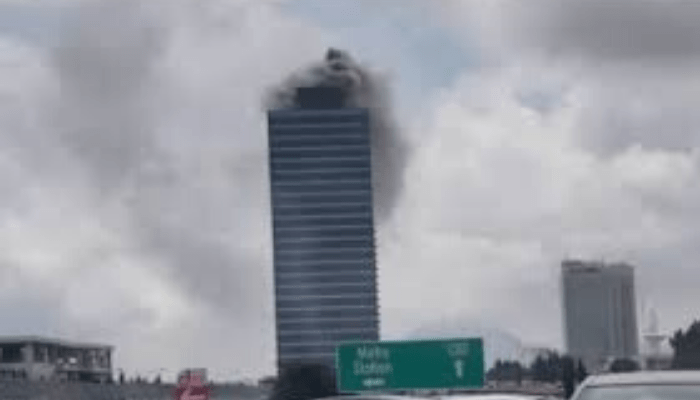 The management of the World Trade Centre (WTC), Abuja has said that no serious damage was done following the inferno that engulfed the magnificent edifice in the early hours of Monday.

A section of the World Trade Centre building in Central Business District of the Federal Capital Territory, Abuja was on Monday gutted by fire.

Eyewitnesses said the fire started from the top of the skyscraper of the main tallest building in the Abuja Central Area.

But responding to inquiries by journalists on the incident which almost caused panic among Abuja residents, Ibukun Adeogun, general manager of the WTC, described the inferno as a minor fire outbreak which was quickly extinguished by high-pressure sprinklers in the building.

Also, Ugo Huan, the spokesperson of the Federal Fire Service, said personnel of the service were immediately drafted to the scene and they succeeded in putting out the fire.

Though both the management of WTC and the Fire Service did not disclose the cause of the fire incident, it was gathered that it was connected with electrical fault which has become common source of fire outbreak in public buildings in the nation’s capital.
Not too long ago, the Office of the Accountant of the Federation, known as Treasury House, the Independent National Electoral Commission (INEC), and Corporate Affairs Commission (CAC) heads offices in Abuja were gutted by fire due to electrical fault.