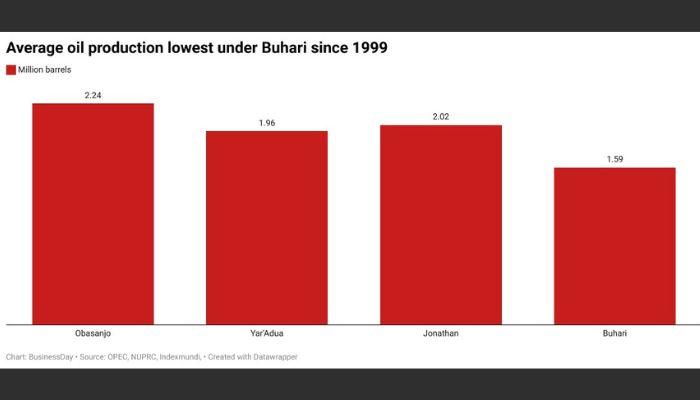 Buhari has doubled as the minister of petroleum resources since 2015, when he first came to power.

The country’s oil output has declined by 42 percent, according to data obtained from the Organisation of Petroleum Exporting Countries (OPEC), the Nigerian Upstream Petroleum Regulatory Commission (NUPRC), and online resource Indexmundi. 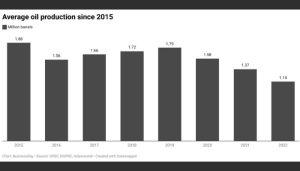 Analysts have attributed the decline in production to insecurity, hostile regulatory environment and poor fiscal policies. Local producers have been hamstrung while multinationals are fleeing the onshore fields in the Niger Delta.

“Companies in that sector are faced with different levels of insecurity and threats,” he said. “This is why most of these companies are no longer looking to invest.”

This year, Nigeria lost $2 billion in eight months on the back of vandalism and crude theft.

“The greatest challenge that led to the drop in production in this administration has been oil theft,” said Ndubuisi Okereke, a senior lecturer in the Department of Chemical and Petroleum Engineering at Afe Babalola University.

According to Wunti, criminal activity has rendered the pipelines inoperable, particularly those near the Bonny terminal. He said daily barrel thefts were extremely high and that about 270 barrels that were scheduled to be loaded in Bonny each day would no longer be loaded as a result of theft.

“This current administration, no doubt, took some steps to avert the challenges of reduced crude oil production. It, however, appears that enough was not done as the situation did not improve significantly,” said Ayodele Oni, energy lawyer and partner at Bloomfield Law Practice.

He said that divestment, heightened security issues in the country, the presence of illegal modular refineries for the refining of illegally obtained crude oil products, and a lack of regulatory certainty, amongst others, have shackled the government’s effort to significantly turn things around.

He said the current administration could have dedicated more resources and demonstrated more dedication to the reduction of crude oil theft and refining within the Niger Delta region.

“The development of adequate infrastructure and tightening of security in the country are also options that could have been considered by the current administration to reduce the issues associated with the reduction of crude oil production,” Oni added.