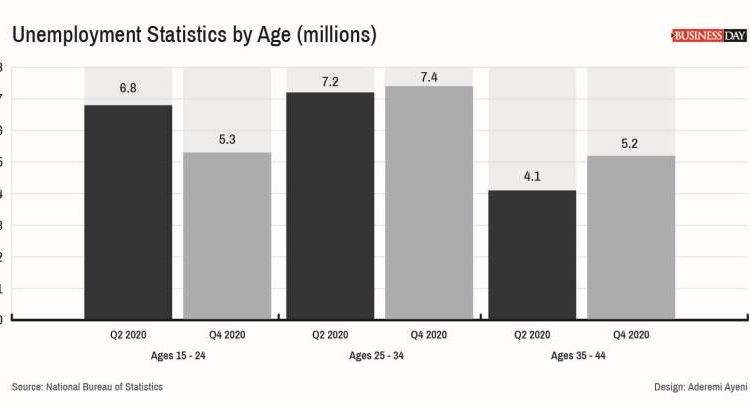 Tunde, a 28-year-old graduate of Economics that has not been able to get a job despite finishing university with good grades, is one of the millions of causalities in Nigeria’s failing attempts to curb unemployment. In order to survive, he has engaged in menial jobs.

“After my mandatory youth service in 2018, I was unable to get a job. Now I do menial jobs to at least take care of myself, even if I can’t take care of my parents yet,” he said.

Tunde’s experience currently depicts the plight of the youth, which constitute over 65 percent in a population of over 200 million in Africa’s biggest economy.

According to data published by the National Bureau of Statistics (NBS) on Monday, Nigeria’s unemployment rate at 33.3 percent is the highest on record.

This means that the country could witness more insecurity challenges as more people will become desperate to survive.

From the report this means that 33.3 percent of the labour force in Nigeria or 23.2 million persons either did nothing or worked for less than 20 hours a week, making them unemployed by the definition in Nigeria. “This is an additional 1.4 million persons from the number in that category in Q2, 2020,” the NBS says.

Further analysis from the report showed that under the age-groupings, the highest rate of unemployment was recorded among the 15-24 year age-group with 53.4 percent, followed by those aged 25-34 with 37 percent. Together, the youth population recorded an unemployment rate of 42.5 percent.

“Prior to the COVID-19 pandemic, the labour market was in a weak position due to challenges in the operating environment that limited the absorptive capacity of different sectors of the economy. Major issues that have constrained demand for labour ranges from the crisis we have seen in the Foreign Exchange market, and that has remained a major drag in the manufacturing sector,” Ologunro said.

He also believes that the high rate of unemployment could see a sporadic increase in social vices ranging from armed robbery, banditry and kidnapping which will make it difficult for the federal government to attract the investment needed for job creation.

Performance of major job creating sectors of the economy such as agriculture, manufacturing, trade and construction remain very weak, as seen in the recent 2020 GDP report by the NBS.

In 2015, President Buhari promised to lift 100 million Nigerians out of poverty in ten years. He also pledged to create three million jobs yearly for the nation’s unemployed youths if voted to power. But most analysts say this is an illusion going by current realities in the economy.

“The public sector lacks the capacity to create sufficient jobs. Their role is to create an enabling and supportive macroeconomic and policy environment that facilitate private sector development,” Damilola Adewale, a Lagos-based economic analyst said.

With unemployment at 33.3 percent and January 2021 inflation rate at 16.47 percent, Nigeria’s misery index stands at 49.7 percent.

“There’s only one way forward really: the government has to remove the handcuffs from the private sector so they can create jobs as fast as they can. Government should focus only on the provision of an enabling environment. Every other thing should be left to private guys,” said Cheta Nwanze, partner, SBM Intelligence.

Muda Yusuf, director general, Lagos Chamber of Commerce and Industry (LCCI) buttressed this, saying the solution is to support private sector players (especially MSMEs) that should be creating jobs as those being created by the government are not sustainable.