The conversation, which centred around advancement in Africa, suggested practical ways to create ease of doing business in the continent. Driven by industry experts, the panel discussions were nothing short of first-hand experiences and reliable solutions from some of Afrrica’s foremost business magnates.

In his opening remark, Engineer Mansur Ahmed, President of the Manufacturers Association of Nigeria, admitted that the conversation on African industrialization will be decidedly inconclusive without a consideration of Africa’s economic relations with China, the nation which is inevitably set to become the leading industrial nation in the world.

With 250 attendees onsite at Oriental Hotel, Lekki, Lagos, and thousands joining the conversation digitally, there is no doubt that the event initiated new ways of looking at industrialization best-suited for the Africa of tomorrow as captured in the African Union’s Agenda 2063.

The Vice President of the Federal Republic of Nigeria, Yemi Osinbajo, testified that “MAN, has, over the years, been faithful to its mission of working with other organs of the organized private sector, government, and other stakeholders in the economy to create an enabling environment for industrial development, growth, and prosperity.”
While stating the importance of the theme for the roundtable, the Vice President implored governments and the private sector to pay close attention to positioning African industries for economic transformation and continental free trade. 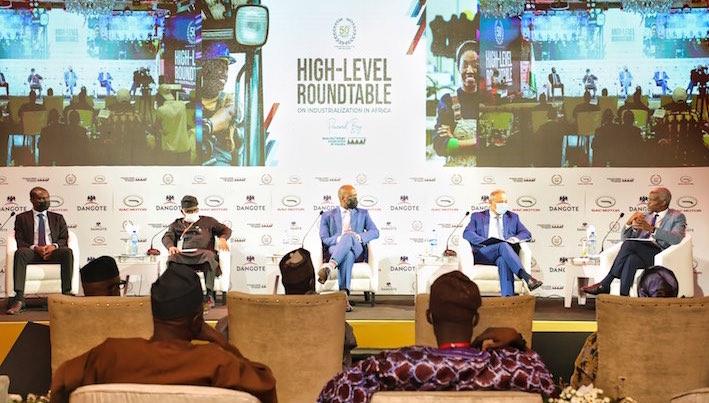 He further said that manufacturing is key to economic transformation, and has the potential of providing sustainable jobs. He encouraged African countries to make industrialization a key priority. Otunba Niyi Adebayo, the Minister of Industry, Trade, and Investment, speaking after the Vice President, lamented Africa’s position at the bottom of the global value chain.

He went on to discuss the implication of this, commenting on the low processing of raw materials in the continent. In his words, “To unleash our full potential, African countries must embark on an audacious agenda, preferably driven by private sector-led investments to ensure the economic transformation of the continent, specifically through industrialization.

The panel session, led by Doyin Salami, a member of the Monetary Policy Committee of the Central Bank of Nigeria, and former member of the Federal Government’s Economic Management Team, had as its first panelist, Alhaji Aliko Dangote, President, Dangote Group. When asked about Africa’s competitive edge in industrialization across the world, Alhaji Dangote stated quite frankly the need to produce high quality products at the most affordable cost.

He referred to the Asian market which concentrated on its domestic products and pricing. Alhaji Dangote went on to advise the managers of African Continental Free Trade Area (AfCFTA) to speed up implementation, and particularly make doing business easier in Africa, in order to be competitive. He also lamented the bottlenecks at the border, exorbitant port charges, and restricted access within Africa.

In furtherance of the panel conversation, H.E. Albert Muchanga, the Commissioner for Economic Development, Trade, Industry and Mining for the AU; Amr Kamel, the Vice President of Afreximbank; Wamkele Mene, the Secretary General of the AfCFTA; Mansur Ahmed, the President of MAN and Chairman of the Pan-African Manufacturers Association; Chief Diana Chen, Vice Chair of the China-Africa Business Council; among others, had conversations around challenges that African manufacturers face, the roles of the AfCFTA in dealing with these hindrances, among other pertinent issues that border around the theme of the event.

Diana Chen, the Chairman of CIG Motors, authorized distributor of GAC Motor in Africa, while speaking during the panel discussion, addressed the difficulty of doing business in Africa, proffered solutions, as well as encouraged Chinese business moguls to invest more in Nigeria. She highlighted China’s interest in speeding up manufacturing in Africa, and her willingness to improve digital technology in the continent.

The President of the Senate, Ahmed Lawan, represented by the Senate Committee Chairman on industry, Senator Saidu Alkali, expressed his delight for the theme of the roundtable discussion, and went on to say that achieving growth in the area of industrialization is critical to job creation, well-being of the people, and reduction in social and political tension.

The Vice President of the Manufacturers Association of Nigeria, Chief John Aluya, during his vote of thanks, relayed the association’s gratitude for the participation, and his delight in the outstanding success of the roundtable. He also revealed that the conversation from the roundtable will help in building a stronger, inclusive, and sustainable economy in Africa. He thanked the panelists for their impact, and specially showed appreciation to Chief Diana Chen, who he described as a Nigerian by heart, for her immense contributions.