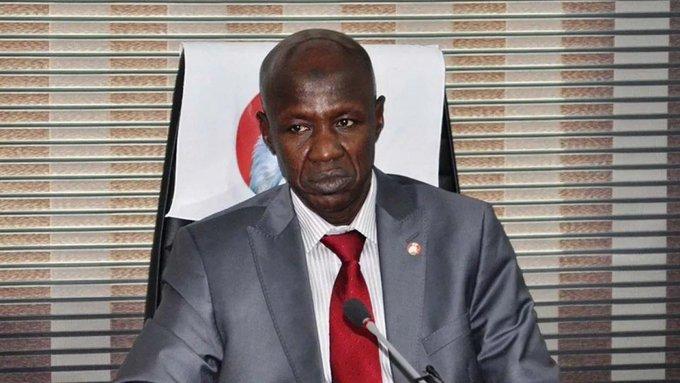 Share
The Ayo Salami-led panel probing allegations of corruption against suspended EFCC chairman, Ibrahim Magu, was stunned on Thursday when the MD/CEO of a tier-2 lender told the panel that there was an error over the reported posting of N573 million into the church account of Emmanuel Omale, founder of the Divine Hand of God Prophetic Ministries, Account No 1486743019.
The bank CEO was invited by the panel following the alleged report that the cleric laundered money for Magu and used the proceeds of the said N573 million to purchase property for him in Dubai.
The bank CEO, while giving evidence on the funds traced to the account, narrated that on January 16, 2016, the bank made a return to NFIU which indicated that there was a transaction of an inflow of well over N573 million.
“This return was said to be in favour of Divine Hand of God Prophetic Ministries Account No 1486743019,” he said.
“After that report, we conducted an investigation and discovered that the lodgement which we reported to NFIU was an error.
“The error was as a result of the fact that we were using a bank application called Pinnacle-7. However, we migrated from that application to a newer version called Pinnacle-10.
“Usually, when the bank intends to migrate from one application to another, we utilise weekends to carry out the exercise. The migration involves moving all the balances of customers from the previous application to the new application. The account of the Divine Hand Ministries was moved during that migration.
“In that branch, we have 983 accounts (Banex). The credit balance in all the 983 accounts domiciled came to the aforesaid amount. It was that balance of N573 million that was wrongly posted as an inflow into Divine Hand Ministries as reported to NFIU.
“This error was not peculiar to Divine Hand of God Prophetic Ministries alone but was also ascribed to 27 other accounts,” the bank boss said.
When asked why it took the bank about four years to discover the error, the CEO responded that the bank just realised the blunder upon invitation by the panel.
President Buhari had in July ordered a  Judicial Commission of Enquiry under the Tribunals of Inquiry Act (Cap T21, LFN, 2004) to investigate the alleged financial impropriety and mismanagement of recovered assets levelled against the suspended acting chairman of the EFCC, Ibrahim Magu.
Recall that Magu was accosted on July 6, 2020 in front of the Wuse office of the EFCC and directed to appear before the Salami-led panel.
The Justice Salami committee had summoned several witnesses to testify on the probe.
BusinessDay gathered that Magu was served with the allegations and terms of reference on Saturday, August 8, 2020.
Multiple sources close to the Presidency also disclosed that the panel was given 45 days to submit its report.
The panel headed by Justice Ayo Salami also has Anthony Michael, a retired Deputy Inspector General of Police, as deputy chairman, Muhammad Babadoko, Hassan Abdullahi, Muhammad Shamsuddeen, and Douglas Egweme as members, and Kazeem Attitebi as secretary.
Share