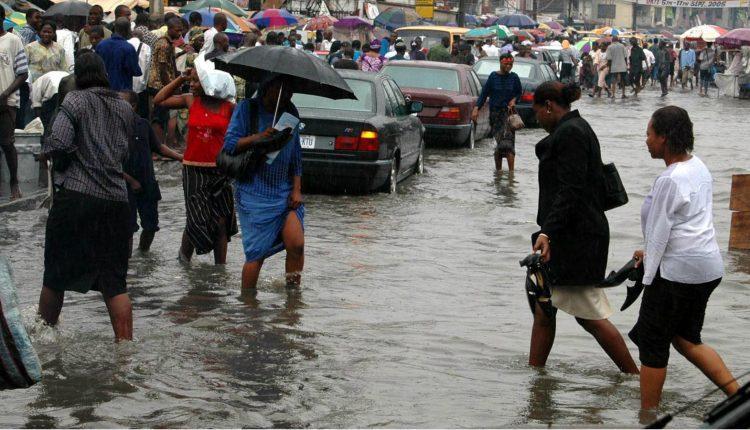 The flood experienced in Lagos on Thursday following the torrential downpour has reportedly swept away a four-year-old girl identified as Azeezat.

Azeezat was said to have been swept away at No 38 Fashola Street, off Olabode Street, Papa Asafa, in Orile-Agege area of the state. The incident, according to eyewitnesse, happened around 10: am when the rain was still pounding hard.

Also, a pregnant and others narrowly escaped death, as they were rescued at No 26 Railway Line, Ashade Quarters, behind Guinness when four buildings collapsed in the area as a result of the rainfall and the attendant flood.

In a related development, another building which collapsed at No 3, Sadiku Street, Alagba, Iyana Ipaja area of the state, left scores of residents injured.

The collapse of the buildings came a day after a storey building caved in at Ogudu area of the state on Wednesday, in which two children were killed.

Azizat was living with her parents in the house which was submerged by the flood. She was said to have missed her step while trying to relocate to a higher ground, and eventually swept into the drainage..

The incident threw the area into mourning as sympathisers joined the search mission to recover the child alive but to no avail.

The storm water from Fashola Street runs through Aboru; Iyana Ipaja; Command to; cross to Ota in Ogun State and end up at Agbara where the canal discharges into the sea.

Meanwhile, residents of No 18 Railway Line, Ashade Quarter, Agege, have been advised to relocate from the area for the safety of their lives as the flood has weakened the building.

At No 3 Sadiku Street, Alagba, Iyana Ipaja, a storey building suddenly collapsed during the downpour. The building which collapsed partially on Thursday, consisted of 8 rooms, 23 shops and 1store.

According to Oke-Osanyintolu, no life was lost in the tragedy.

“Upon arrival at the scene of incident, it was discovered that a storey building consisting of 8 rooms, 23 shops and 1 store had partially collapsed.

“Further investigation carried out by Lagos Response Team, LRT revealed that, the adjoining fence to the staircase collapsed.

“This also affected the toilet of the adjacent building. No loss of life(s) nor injury recorded,” he said.

NSIA to invest in raw materials, logistics, others