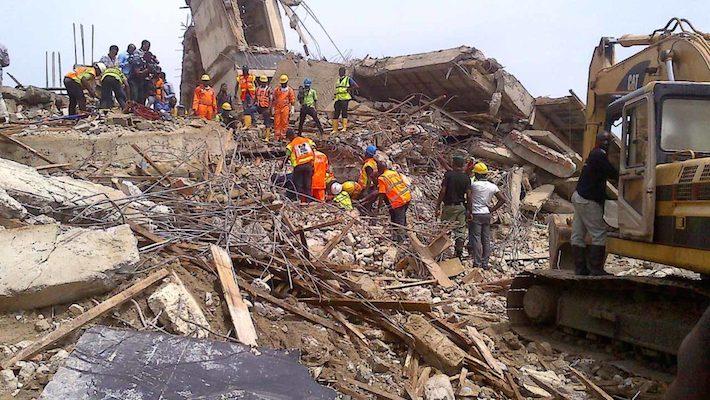 The Nigerian Institute of Builders (NIOB) has appealed to Nigerians to use professional builders in building construction to avert incessant building collapse in the country.

He urged the state government to heed the call of the institute, to use professional builders to supervise building constructions in the state to avert further occurrences.

About five persons were feared dead when a three-storey building under construction collapsed in Aba, the commercial hub of Abia State, on Wednesday, September 16, 2020.

According to a witness, one of the five persons inside the structure at the time of the incident was killed while fate of the four others who were trapped in the rubbles was yet to be determined.

The building, which is located at No 85 Azikiwe Road, in Aba South Local Government Area of the State, collapsed at about 5:15am on Wednesday, September 16 following a heavy downpour.

Uche Kalu, the only survivor, said that five other young persons were still trapped in the rubbles.

The remains of one of the yet-to-be-identified victims, who tried to escape before getting trapped at the edge of the building, was seen hanging with stretched out legs, as the rubbles divided the victim into two, from the head.

It was also gathered from Kalu that the collapsed building, which has been under construction for about a year now, serves as shelter for some homeless youths.

He however, told our reporter that he and some of the other victims were taking refuge in the building when the incident occurred.

Kalu, who said he is a bricklayer, explained that he was discussing a contract with one of the trapped victims, when the building collapsed and buried him under the rubbles.

The survivor, who had head injuries, was later rushed to a nearby hospital, by sympathisers for treatment. Rescue team from Abia State Government was sighted at the scene, 10 hours after the incident occurred.

However, members of the Nigerian Red Cross Society (NRCS), who arrived the scene at about 8:00am moved into the building, but came out helpless, as there was no excavator to help clear the rubbles.

Wisdom Okoro, member, Practice Committee, representing Abia State at the Council of Registered Builders of Nigeria, observed that the collapsed building had no builder attached to it. He observed further that lives of citizens would be saved and costs of buildings reduced, if government insisted on having professional builders supervise buildings under construction.

He called on Abia State Government to discontinue the construction of the building and set up a panel to investigate its construction, to forestall future occurrences.

Leonard Eze, a building engineer and resident, who visited the scene, described the building as a death trap and a disaster waiting to happen. He faulted the Aba South Local Government Area (LGA) Town Planning Authority and other relevant government agencies, for allowing the continuation of the building, which he observed was structurally faulty.

“Any day I pass here, I weep for what we’re doing to ourselves. It’s unfortunate that the small rain of yesterday proved that this disaster is even worse than I thought. How can one use substandard materials and expect a miracle? Someone ought to be supervising the job from government’s angle, but what do you see, shoddy oversight riddled with corruption, led to the loss of these lives that could have been avoided.

“Is there any year we don’t have one to three building collapses in Aba? What has government done about them? People attribute things like this to rituals, but there is nothing like that; as this is a clear engineering error.

“Some building contractors in Aba will use poor methods/techniques, combined with substandard rods, poorly molded blocks, improper cement grades, disjointed support pillars and when relevant government agencies come calling, they will bribe them and they will go, thinking that they can eat their cake and still have it,” Eze said.

John Okiyi Kalu, the state’s commissioner for Information, disclosed this during a radio programme monitored in Aba.

He explained that preliminary information indicated that the plan for the building was yet to be approved with on site evaluation indicating that the materials used to construct the collapsed part of the structure was sub-standard.

Okiyi further said that security agents were currently on the hunt for the building engineer and developer of the property, noting that most parts of the building were hurriedly put up during the Covid-19 lockdown period with a view to possibly evade the town planning authority.

He warned that government would no longer tolerate a repeat of the situation, where buildings are indiscriminately erected without proper approval and supervision.

Analysts give explanations to hijack of ENDSARS protest by hoodlums