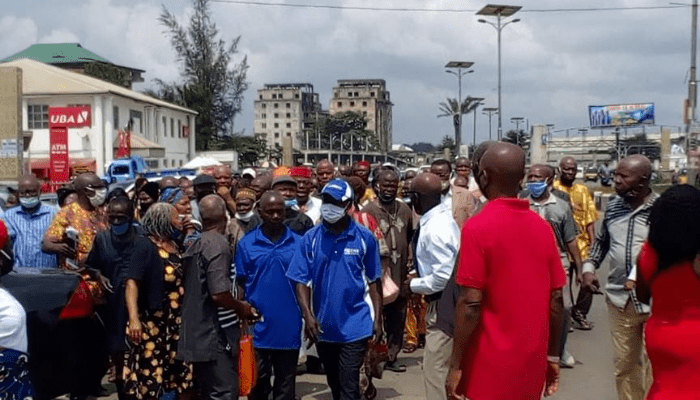 Hundreds of pensioners in Imo State who were flogged on Tuesday, August 4, 2020, at the gate of the Government House in Owerri said those who carried out the assault were government-backed thugs.

They also said the thugs threw water at them earlier but commended a police officer who they said addressed them with compassion.

The government has denied these charges, saying the senior citizens were not flogged.

An unprecedented attack was actually said to have been meted on the Imo pensioners who protested to press home demand for payment of five months arrears of pensions and gratuities by the Governor Hope Uzodimma-led administration in the state.

The Tuesday protest is one of a series of such protests in the Imo State capital but thugs suspected to be on hire descended heavily on the protesting pensioners exactly at the entrance of Imo State Government House, flogging the old men and women with various sizes of canes. Some state government officials were seen standing akimbo and watching.

Before the attack by suspected hired thugs, the senior citizens had already marched along some of the major streets in Owerri before arriving at the Government House, protesting peacefully against the non-payment of their five months’ pensions and gratuities.

The issue of unpaid salaries to workers had played at the background over the months. A female journalist was suspended for going on social media to ask for workers to be paid. This has driven the demand underground for fear of reprisals.

The protest brought to five the number of times in less than a month that the senior citizens had embarked upon protests to publicly show their grievances.

Some of the protesters told newsmen that they were unaware of the ambush laid by the suspected hired thugs who on seeing them approaching the Government House gate quickly used canes and formed barricade to stop them from entering the main gate, but the senior citizens who were resolute defied the attemts to stop them. This resulted in the hoodlums flogging them without exhibiting any atom of compassion and mercy.

It was gathered that as the pensioners were shouting and pushing forward, a detachment of police operatives led by an assistant commissioner of police, AJ Moses, arrived the scene.

Immediately on the police arrival, they allegedly started to disperse the thugs, while the police chief who showed civility began to appeal to the protesting pensioners.

The pensioners have pointedly accused the government of being insensitive to their plight.

Speaking to a section of the press in Owerri during the protest, a pensioner, Ebenezer Ibekwe, said the thugs could have been recruited and sent only by the state government.

Ibekwe who said that he retired as a secondary school principal in 2011 added that the thugs had poured water on them on their way to the Government House before some journalists and policemen arrived.

He said that no amount of intimidation by the state government would stop them from continually demanding their arrears of pensions and gratuities until they were paid.

“Thugs were flogging us, their fathers and mothers. I pity them because they have dug their graves. They stand cursed,” Ibekwe said.

“At Warehouse Junction, while we were coming, they accosted us and were pouring water on us. This has never happened in the history of Imo State. The monies we worked for and the government is sending urchins, idiots, and never-do-wells to assault people who are old enough to be their grandparents.”

Reacting, the Senior Special Assistant to Gov Uzodimma on Print Media, Modestus Nwamkpa, denied the flogging of the pensioners by the thugs.

Nwamkpa said the government had discovered that most of the protesters were ghost pensioners who were being used by the opposition politicians to discredit the performances of the state government. The spokesman did not reveal how many pensioners have been paid so the people would know who is still claiming to be owed.