How to curb the flood menace in Lagos

As the rainy season emerged during the first week of March, residents of Satellite Town, Lagos have been troubled by the flood that has destroyed their roads and properties.

Houses along the major road (Marwa Road) were brought down last year for dualization, due to the hardship residents were experiencing because of the increase in tanker usage.

Unfortunately, the construction was abandoned late last year. Since wide gutters were created with loose sands, when then rains came, the road became impassable for small vehicles. Only heavy-duty vehicles like tankers can make use of the road easily.

Ekene, a resident who has lived in the town for 12 years explained, “As I was driving through the flooded Marwa Road, my vehicle fell into a gully. Water entered into the engine of my vehicle and was also spewing out of my exhaust pipe, by the time I got it out.”

The Nigeria Hydrological Services Agency stated in its prediction of the 2022 Annual Flood Outlook that Lagos is among the states with a highly probable flood risk.

The rise in population in Lagos contributes to flooding by increasing the pressure on sewer systems and promoting urban expansion into areas at high risk of flooding. Rapid urbanisation, bad roads and poor drainage systems has led to increased flooding.

According to the World Population Review, the population of people in Lagos is approximately 15.4 million and the number is projected to rise to 20 million by 2030.

Poor urban town planning in Lagos State has been a major fact in the flooding issue.

“Floods occurrence have continued to cause death, loss of livelihood, and damage to public infrastructure and the ecosystem and biodiversity,” he said.

Daramola Daniel, a resident at Agege said “Despite the massive gutters at Ile-Epo market, when it rains, the whole market gets flooded. The main problem is poor waste management.

“The gutters are blocked due to a large amount of waste thrown inside. During the rainy season, the market looks terrible, as the flood brings waste to the open.

“While driving through the market, the water gets to the glass level of my car. Also, the flood contributes to traffic jams,” Daniel said.

Daniel suggested that frequent sanitation has a big role to play in addressing the blocked gutters.

Ogunwunmi explained that floods are caused as a result of excessive rainfall by climate change and other human factors like pollution, blockages of drainage, living close to the water, land reclamation, and cutting down of mangroves which is deforestation.

Furthermore, areas occupied by water are now converted to dryland (landfill) through various engineering, however, such acts are contributing to subsidence (sinking of the building) and are one of the contributing factors that trigger floods in Lagos.

However, there is a need for effective and efficient proper waste management and disposal, most especially the rural areas which are inaccessible by the government set up waste trucks.

He insisted that strict regulation and policy to curb disposing of waste at various drainage channels and culverts should be implemented.

Also, an affordable fee should be charged for the waste disposal fee, which will encourage people to use the appropriate waste management institution owned by the government or private organisation. 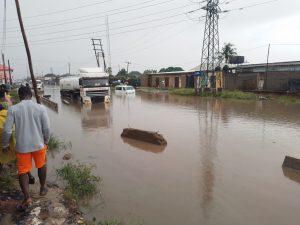 Akinsemoyin Tobi, a medical and sanitation NYSC corper said “Every time we clear the gutters at Onigbongbo, Allen Avenue, Ikeja on Thursdays, we always meet a new set of waste thrown into the gutter.”

Some of the worst affected areas in Lagos include Epe, Oshodi, Mushin, Agege, Ifako Ijaye, Ikorodu, and a few other areas. Some parts of Ikeja, Ibeju, Lekki, Badagry, Surulere and Ojo. Other affected areas include, Amuwo-Odofin, Apapa and Eti-Osa local government area.

Ogunwumi said “Developed countries are adopting nature-based solutions to adapt to and mitigate the impact of flooding, an example is the creation of sponges in China, recreation parks, and tree planting in major cities and along the coast.

He said that the Netherlands is adopting the policy of living with water instead of landfill or land reclamation, they now adopt a floating city where major houses and development are done on the water (ocean) instead of pushing the water away and destroying the water ecosystem.

However, there is a need for afforestation and programs that support tree planting. Research has shown that the presence of mangroves and wetlands is utilised to reduce the occurrence of floods.

Therefore, a mangrove restoration program along the coast and riverine cities will reduce the drastic impact of floods in Nigeria.

The flood consultant said “It is imperative for Nigeria to fasten energy transition from the use of fossil fuels to renewables to reduce the emission of greenhouse gases that changes the climate, which contributes to the flood.

“The geographical location of Lagos state is bordered by the Atlantic Ocean which makes it vulnerable to the impact of rising sea levels, associated with the melting of the ice sheet, glaciers, and the expansion of ocean water. As a result, there is usually an overflow of the ocean water which subsequently flows into the land area,” he said.

In addition, Lagos lacks appropriate proper land use regulation, planning and management. There is an increase in housing development with no proper infrastructure and facilities that can give room for water flow within the city.

However, there are many low-standard houses located close to the river such an act automatically exposes the population and their house to the impact of the flood.

Ogunwumi said “There is a huge gap in flood early warning communication, most especially flood hazard prediction with maps and river discharge information is not available at the community level.

In addition, a precise and accurate flood susceptibility map showing the communities and local government areas’ level of susceptibility to flooding should be provided to the people prior to the onset of rainfall.

However, such provision will make the citizens aware of the risk and can enhance their preparedness for flooding which will subsequently reduce flood impact if they eventually occur.