How does Bitcoin work? 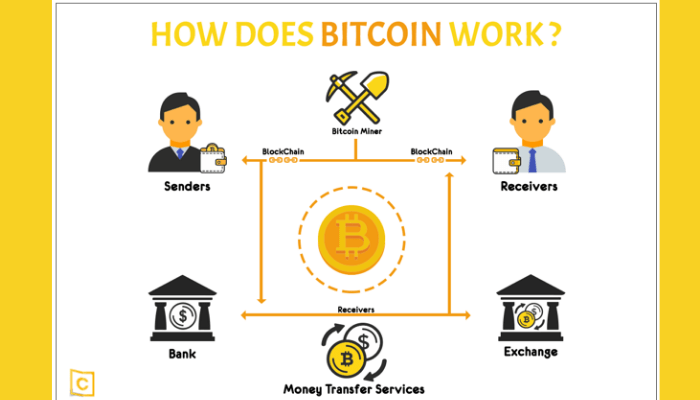 Although there have been many discussions and press releases about bitcoins, not a lot of people and businesses are aware of this concept of cryptocurrencies as a medium of exchange. However, there has also been growth at the same time as it is important that more and more people and businesses become aware in order for the cryptocurrencies to survive. Once people see the impact of cryptocurrency and its uses they get hooked.
Bitcoin is an electronic coin and was the first cryptocurrency, as mentioned before. After bitcoin, a lot of different cryptocurrencies have come up and are making a name for themselves in the crypto market. It is important to understand that bitcoin is a distributed and decentralized digital cash system, which is monitored with a digital ledger that is referred to as the blockchain transaction database. Once we know what bitcoin really is, we can move on to why this cryptocurrency is going to be so important in the future.

How Does Cryptocurrency Work?
Cryptocurrency is a very well encrypted, decentralized digital exchange that people can use instead of fiat currencies. Bitcoin uses cryptography and already serves a lot of people and businesses as a medium of exchange. Every bitcoin transaction is recorded in a digital ledger called blockchain. Bitcoin can be said to be a completely self-sufficient digital currency, which does not require any bank in order to record or perform transactions.

Bitcoin is similar to physical coins in many ways as they also have value and can be used for the purposes of trading, such as payment of goods and services or even as a form of investment. Bitcoin(s) can also be traded from someone’s wallet to another and this someone could just be a trader or a huge business. Bitcoin is stored in a digital wallet that can be accessed on a mobile phone or a computer. The process of creating bitcoins is so complex, it is almost impossible to hack into the system. This helps in making the bitcoin forgery-resistant.

How are Cryptocurrency Transactions Performed?
Each cryptocurrency will consist of a network of peers, and all of the peers have a list of all the transactions that were performed in the past. Any transfer will have to be signed by the sender’s private key which will send a broadcast message to the network, peer to peer. After some time, it gets confirmed. Once the transaction is confirmed, it is done and it cannot be changed or reversed in any scenario.

It is the job of the miners in the network to confirm any and every transaction. Mining programs will receive a notification, they will then after stamping it send it back into the network. Once the transaction is confirmed, an entry will be added to the database and will become a part of the blockchain.

The Future of Cryptocurrency.
Over the years it has been proven that the cryptocurrencies, especially bitcoin, have been very volatile. This volatility is attributable to a lot of different factors. Volatility might be a nightmare for the investors but it has proved to be a blessing for people who are in the crypto trading business. They can make huge profits if they can buy and sell bitcoins at the right time. However, cryptocurrencies are still only in initial stages, so it might be a little too early to assume what kind of an impact bitcoin and other cryptocurrencies can have.

In recent times, the introduction of AI powered trading systems or trading bots have made it even easier for traders to make profit from the crypto market. If you are thinking about entering the market and learning more about crypto trading, we would recommend you to try BitcoinSupreme trading as it is available for all users for free. Once you notice how many people are using the volatility of the crypto market to their advantage by trading, you will realize that there are no signs of the market slowing down anytime soon.