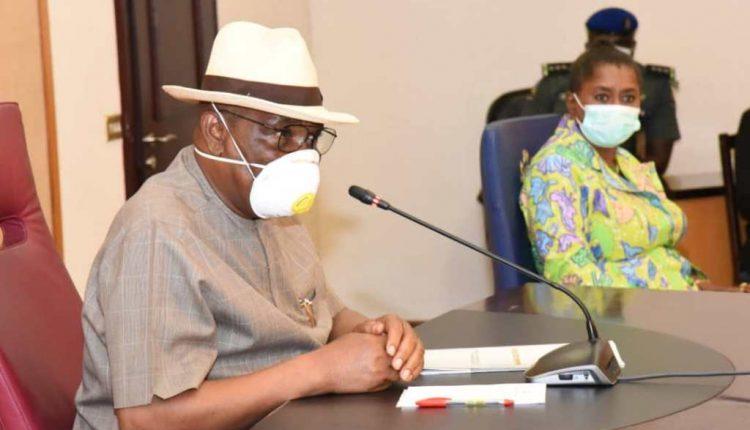 Statistics may be coming out to show why Governor Nyesom Wike of Rivers State seems to aggressively engage oil companies and top-level visitors to the state. Now, the governor has stated that 60 per cent of coronavirus cases recorded in the state are from oil workers returning from oil rigs.

Gov Wike spat this out in the presence of a major oil corporation, Mobil Producing Nigeria Unlimited which paid him a courtesy visit at Government House, Port Harcourt on Wednesday, May 20, 2020.

He stated that it is for this reason that the state government has insisted that oil workers coming into the state must be tested to confirm their coronavirus status.

The governor noted that oil remains the mainstay of the economy and that government actions are not targeted at anybody or any organisation. He rather recalled that recently the Nigeria Airforce Base, Port Harcourt, also quarantined 14 oil workers out which three tested positive.

He said: “My concern is that companies should always notify the government of workers they are bringing into the state so that our health officials can monitor them.

“So, all that we are saying is that we should work together. But people bring in politics that Rivers State is difficult, they don’t want any oil exploration. This is because people want to play politics.

“People say we don’t want foodstuff and livestock to come into the State. That is not correct. What we are saying is that human beings should not be hidden with these items, ” he stated.

The Governor lauded Mobil Producing Nigeria Unlimited for the support to the state government in its fight against COVID 19, pointing out that he will always ensure that the lives of Rivers people were protected.

Earlier, Mobil’s Executive Director, Udobong Ntia, commended the State Governor for measures put in place to contain the spread of COVID-19 in the state, particularly the increase in testing.

He noted measures also put in place by the company to fight the virus and donated RNA COVID-19 Testing Kits and hospital beds to the state government.

Ntia assured of the company’s commitment to support the government’s effort in providing safety and good health to the people of the state.