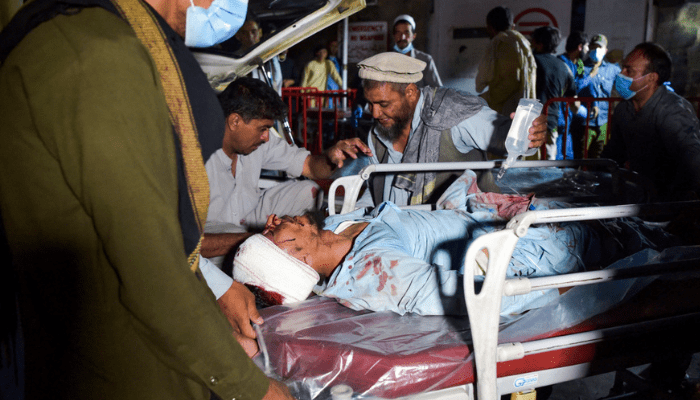 John Kirby, US Pentagon’s Press Secretary, has reported that an explosion occurred today outside Hamid Karzai International Airport in Kabul, the Afghanistan capital.

Thirteen people have been confirmed dead but the number of casualties is bound to rise as with many people wounded including children and US servicemen, according to the UK Daily Mail, CNN, and Al Arabiya.

“We can confirm that the explosion at the Abbey Gate was the result of a complex attack that resulted in a number of US and civilian casualties. We can also confirm at least one other explosion at or near the Baron Hotel, a short distance from Abbey Gate. We will continue to update”, Kirby announced today.

Following the withdrawal of the United States of America (USA) from Afghanistan after twenty years of military escapades, the country has become a reference point for appraising the appropriate methodologies for military interventions in other countries.

The Taliban Government which was ousted in 2001, with about 75,000 fighters, overran the US-trained Afghan forces numbering about 300,000 in a matter of days, and officially, the Taliban returned to power on August 15.

According to Al Arabiya, Saudi Arabia online news, the explosion has a hallmark of suicide bombing, with pictures and images circulating online from the scene of the explosion showing several people covered in blood as ambulances rushed to the scene to treat the injured.

Today’s explosions came amid the initial posture by the Taliban to embrace a reconciliatory path completely different from the styles they employed during their first time in power in Afghanistan, between 1996 and 2001.

This dastardly act has received fierce condemnations from world leaders. US Senator, Mitt Romney is among the earliest set of world leaders to condemn the explosions in the Afghan capital, when he spoke with CNN.

“Horrific terrorist attacks outside Kabul airport. My heart breaks for the US service members wounded in the explosion and the innocent Afghan lives lost. I am inspired by the strength and compassion of our troops and pray for their safety,” Romney said.

“We are confronted with a very tense situation and we are coordinating with our American allies,” Emmanuel Macron,nch President Fre announced.

“Western troops inside the airport rapidly worked to keep the evacuation moving as fast as possible, Taliban fighters said they would be guarding the perimeter outside where thousands of people had thronged daily since the extremist group took control of the country on August 15, hoping to get on the flights”, Al Arabiya reported.

The US Government, according to Factcheck.org, signed an agreement with the Taliban on February 29, 2020 when it had 13,000 troops in that country, indicating it would withdraw its troops from Afghanistan effective May 1, 2021. On March 1, 2020, the immediate past president of Afghanistan, Ashraf Ghani objected to some of the provisions in the US deal with the Taliban that compelled the Afghan government to release 5,000 Taliban prisoners.

Further, by March 4, 2021, Mark Milley, a general and Chairman of the Joint Chiefs of Staff informed the US Senate that the Taliban promised not to attack US troops and coalition forces. In fulfillment of parts of the terms of the agreement, President Ghani ordered the release of 1,500 Taliban prisoners on March 10, 2020.

By March 19, 2020, the United States had reduced its forces to about 8,600. On September 3,2020, the then Afghan Government headed by former President Ghani released 400 Taliban prisoners, paving the way for the commencement of Afghan peace talks.

On March 12, 2020, the then Afghan government and Taliban agreed to meet in Qatar on March 10 2021 for the commencement of peace talks.

Both the then Afghan government and Taliban agreed on December 2, 2020, on a framework that would govern peace negotiations, and by January 15, 2021, the United States reduced its troops in Afghanistan to 2,500.

On assumption of office, President Biden continued from where his predecessor stopped, and the back and forth negotiations involved notable officials such as Zalmay Khalilzad, the US special representative for Afghanistan reconciliation, and Zabihullah Mujahid, Taliban spokesman, as well as other officials.