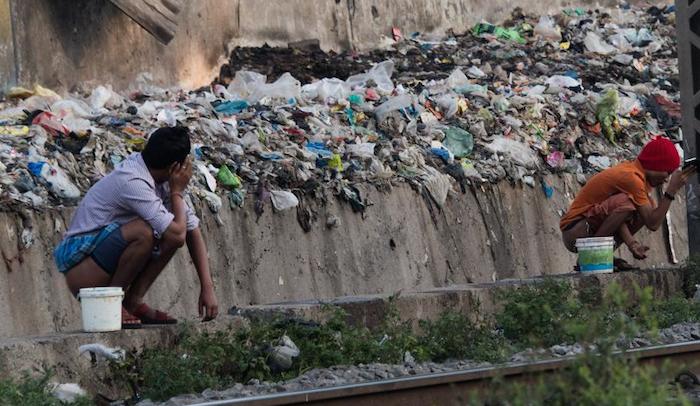 Though the report that Nigeria is number one in Africa and 2nd in the world among countries practising open defecation did not sit well with many people, experience in many of the country’s big cities including Lagos, Onitsha, Port Harcourt and Abuja confirms that report.

In Lagos, the country’s commercial nerve centre, for instance, open defecation is commonplace in many parts of the city. The reason is, perhaps, not far-fetched. Open defecation is chiefly an urban problem and therefore not unexpected in Lagos with its huge population and beehive commercial activities.

But the practice is assuming a dangerous dimension in places like Apapa Oshodi Expressway, Mile 2, Ijora, Orile, Lagos-Badagry Expressway, Mile 12, etc. Incidentally, these are areas with heavy traffic congestion and gridlock, showing a strong link between the practice and traffic gridlock.

As early as 6am up to 12 noon on Lagos-Badagry Expressway, over 20 residents are seen at any given time, defecating in the open, mostly on the expressway where construction work is going on.

This happens mostly on the stretch of the expressway between Abule Ado and Festac First Gate, a few metres away from Mile 2 where the practice is also rife. Within this stretch are many trailers and tankers, parked indiscriminately on the road, causing terrible gridlock on the axis.

BusinessDay findings show that it is the same scenario on Apapa-Oshodi Expressway, Ijora, Orile and other places where trucks are stationary on the roads. In all these areas, public toilet is luxury which explains why this practice is most common among truck drivers, touts, motor park boys and traders.

Mile 2 Bridge to Tin Can first and second gates has become an eyesore as a result of open defecation. This route, particularly, is always in the news for wrong reasons. Besides traffic gridlock, the expressway is also known for armed robbery and pick-pocketing. These are causes for concern but open defecation and indiscriminate disposal of faeces are more worrisome.

“This is a major fallout of the unending traffic gridlock that government is finding very difficult to address. This has serious health implications for the people who live or have their businesses within the vicinity of these areas that have been turned into toilet pits,” Hakeem Owoeye, an environmentalist, told BusinessDay.

Owoeye cited studies which show that careless handling of faeces is dangerous to health. He explained that just one gramme of fresh faeces from an infected person can contain around 106 viral pathogens, 106–108 bacterial pathogens, 104 protozoan cysts or cysts.

Open defecation, according to medical experts, can lead to diarrheal diseases in children which make them vulnerable to malnutrition, stunting and opportunistic infection such as pneumonia. The practice also exposes members of the public to various infections such as cholera, typhoid, hepatitis A, polio, amoebic dysentery, hookworm and tapeworm infection.

Even those who are involved in this practice cannot help themselves just as those whose businesses are located in these areas are helpless.

“We eat, defecate and sleep here. In this smelly environment, we must eat whatever we see; we don’t bathe because we cannot go back to our homes. If we say we want to go to the toilet, where do we go? How many public toilets have you seen along the road? ” Sadiq, a trailer driver responded to our correspondent’s question.

Another driver who simply identified himself as Jamiu noted that faeces are everywhere because people have to eat and if they eat, they must defecate. “When you are permanently on the road and there are no public toilets, where else do you defecate except on the road or nearby bush,” he asked rhetorically.

“You see, when government fails to solve one problem, it creates another. What do I mean here? Until government looks inwards and comes up with a lasting solution to the Apapa gridlock, open defecation will continue to thrive in the city,” Owoeye said.

He added that time has come for the government to also enforce ‘one house, one toilet’ regulation, especially in the congested areas of the state such as Ajugunle, Orile, Amukoko, Ijora Badia, Okomaiko and others. “It should also provide public toilets in public places and make them affordable,” he added.

The issue of environment, he advised, should be taken seriously because of its health implications for the citizens of the state and the country at large.