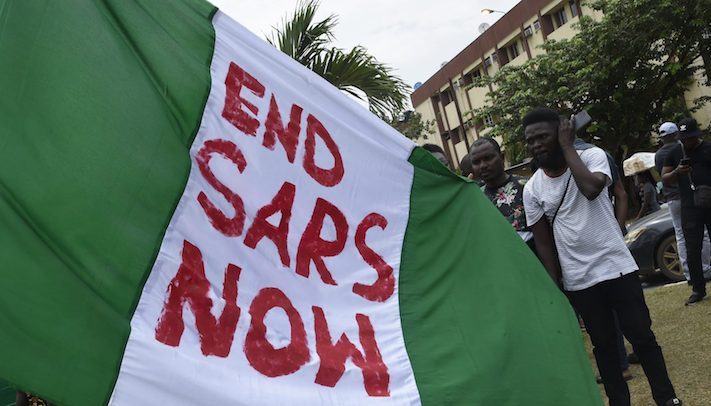 The Buhari Media Organisation (BMO) has described the US report on the #EndSARS protest at the Lekki Tollgate as a vindication of the President Muhammadu Buhari administration’s stance that troops did not open fire on protesters.

According to the group, the United States of America’s clarification is also a further dent in the credibility of Amnesty International.

In a statement signed by its Chairman Niyi Akinsiju and Secretary Cassidy Madueke, BMO said that the report put a lie to claims of massacre spearheaded by the rights group and its local collaborators.

“We join millions of patriotic Nigerians to welcome the US affirmation that there was no concrete evidence that soldiers shot anyone dead at the Lekki tollgate in Lagos on October 20 last year in the course of enforcing a curfew in the aftermath of a protest against police brutality.

“It is a vindication of what we had been saying in response to claims spearheaded by Amnesty International which misled the international community to believe that there was indeed a massacre on the day.

“We recall that we had challenged the rights group and its local allies to show evidence to back up claims we insisted were false, but up till now, no one has shown a grieving family or families of those who they claimed were shot dead,” it said.

The group further said: “We would be right to say that the US Human Rights report has shown the unreliability of Amnesty as an unbiased witness of truth, as well as call to question, the motive of the organisers of the #EndSARS in seeking to blackmail the government and cause global disaffection against Nigeria by spreading deliberate falsehood.

“Also culpable is the section of the media that insisted on using the word ‘massacre’ to describe the Lekki incident without any form of investigation as expected of journalists.

“And now that the US has vindicated the army and by extension the Buhari administration, we call on Amnesty and their local allies to accept that they misled the world into believing that Nigerian soldiers were capable of firing into a crowd of protesters.

“We also see it as a clear message to opposition elements, especially the Peoples Democratic Party (PDP), which has for several months has made allusions to a massacre which took place only in their imagination, and calling for an international probe.

“We hope the American news network, CNN, will take a cue from the US government and admit that it goofed in its ‘special report’ which relied on false claims of multiple deaths at the toll gate”, the group added.

The group believes that the Buhari government is a respecter of citizens’ rights and privilege and would not do anything to abridge those rights.

“For the avoidance of doubt, there is no record of any Nigerian in detention for holding civil opinions contrary to the outlook of the government. In fact the public space is filled with all shades of critics daily voicing all forms of opinions on national issues and this is because no one is hounding them for their views.

“We believe that the Buhari administration deserves more credit than it is getting for upholding the right of Nigerians to their views, even when such views are at variance with facts on ground”.

The group added that President Buhari would continue to respect and uphold the fundamental rights of all Nigerians, regardless of their religious, ethnic or political persuasions.