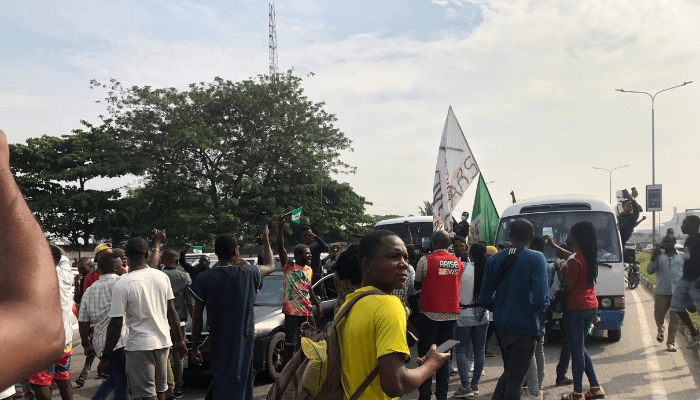 Despite a slow outing earlier seen today, the Lekki protest is gaining momentum as youths are trooping into the area in various cars to mark the protest.

Some notable personalities that have shown up include Falz, a Nigerian music star. Macaroni, an online comedian, and Pamilerin Adegoke, an influencer.

The youths say that nothing has been done to get justice for the fallen ‘heroes’, who were killed on 20 October 2020.

They demand justice for all the bloodshed.

Earlier, the protest had started as a procession where youths are seen driving around the Lekki Plaza holding the Nigerian flag and chanting songs.

At, it looked as if the usual EndSARS protest crowd would be missing, how, just around 9 am, the protest picked up.

The police and other security agencies are very being civil and professional. So, far there has not been interference as they stood watching the youths make their demands.