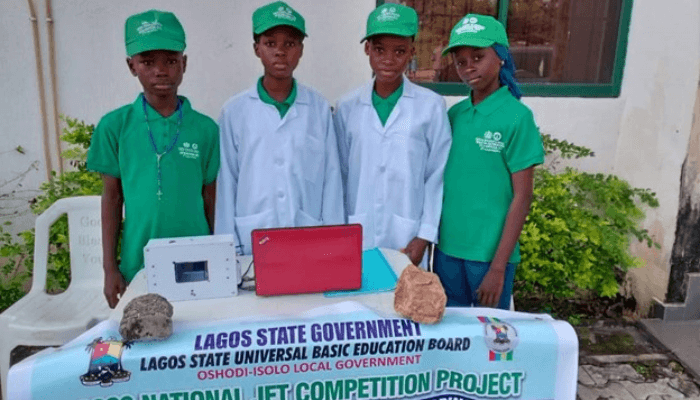 He was followed by Unique Emmanuel and Sarah Adeyemi, of Monsuru Agoro Primary School, Mafoluku, who took the third position in the project competition respectively.

The three pupils are products of the EKOEXCEL initiative overseen by the Lagos State Universal Basic Education Board (LASUBEB). EKOEXCEL is the innovative digital initiative launched by Governor Babajide Sanwo-Olu in 2019 to transform primary schools in the state.

The annual JETS competition was organised by the Department of Science and Technology, Federal Ministry of Education held at the National Mathematical Centre Abuja from September 30 to November 6, 2022.

Former executive secretary of the National Universities Commission (NUC) and a prominent science educator, Peter Okebukola founded the Junior Engineers, Technicians and Scientists (JETS) Club in 1982. The club aims to expose young minds to science, engineering, and technology. Some of its objectives include preparing young minds for a high level of imagination and reasoning, teaching young minds to acquire valuable practical skills and equipping young minds with a broad range of engineering and science-related skills.

Affirming the inclusive education the pupils are receiving through EKOEXCEL, the two girls presented an air and temperature monitoring system they developed using an embedded approach.

Speaking about their feat, Emmanuel and Adeyemi attributed it to the quality instruction they receive under EKOEXCEL, noting that it has tremendously improved their education.

Emmanuel said: “EKOEXCEL has impacted more knowledge in my life. I have learned so many things through the programme, and I so much love the strive points. Learning through the EKOEXCEL programme has made me know and think faster. I am better organised now and punctual in school as it allows for interaction whenever our teacher asks us to discuss it during a lesson.”

Commenting on the performance of the students, LASUBEB chairman, Wahab Alawiye-King, said, “This achievement excites all of us about the EKOEXCEL programme, especially because of the participation by females in this cohort.