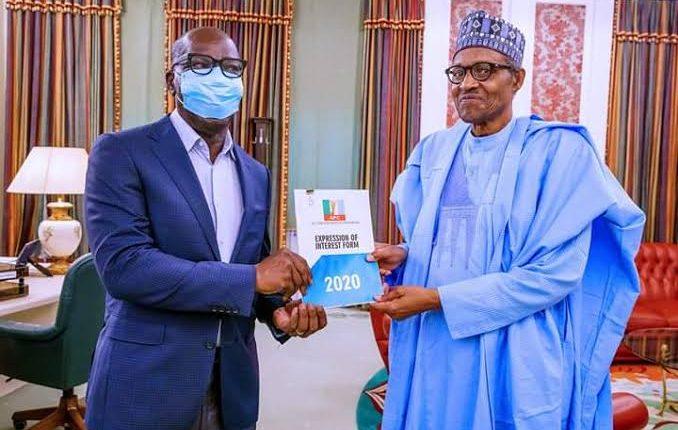 Governor Godwin Obaseki of Edo State on Monday formerly presented his re-election bid form under the All Progressives Congress (APC) to President Muhammadu Buhari, opening up grounds for an epic battle for the Edo governorship election, coming up in September this year.

Obaseki is currently engaged in re-election war with his erstwhile political ally and national chairman of the APC, Adams Oshiomhole.

The visit, coming ahead of the governorship primary election of the party, scheduled for this month, is seen as a smart move to impress on President Buhari that he would contest the election on the platform of the party, contrary to speculations that he might have dumped the party.

But speaking with State House correspondents on the purpose of his visit, Governor Obaseki who described Buhari as “father of the Party,” said “it will be wrong to assume or take things for granted, so I have to formally inform him.”

The governor also said over 300,000 of Edo indigenes had been screen for COVID-19 out of the 500,000 targets set by the government, and pledged to ensure the killers of the 100-level student of the University of Benin, Uwaila Omozuwa, were tracked and brought to justice.

“Well I came to see the President to formally inform him of my desire and intention to seek re-election as Governor of Edo State on the platform of the APC in the forthcoming gubernatorial election. Even though President Buhari is a father of our nation, it will be wrong to just assume or take things for granted so I have to formally inform him of my intention to re-contest and solicit his support in my gubernatorial bid.”

Obaseki told journalists that he had done well for his people and therefore, deserved another term of office.

“Well I believe having been Governor of the State for three years and the jury is out, you can check with Edo people, whether as Governor I have served creditably well. The consensus is that we have done well as a government and that people will like us to continue with the laudable programmes and policies which we have undertaken under the last three years.

“If you recall when I got into power as a Governor, one thing Edo was known for was human trafficking. We had over 30,000 of our citizens, who were in Libya, waiting to cross over to Europe. Today, in less than three years, we have stopped it.

“We are celebrated globally, across the continent in terms of the reforms we have undertaken in basic education in this country. Those children, I can’t abandon them; we can’t stop what we have achieved to date. So, based on that, we believe that because of the connection which we have created with our people, we have no doubt in our minds that we will win any election, direct or indirect elections in Edo State,” he said.

Speaking on the path of peace for the state, the governor noted with dismay that the political tussle in Edo State was not from within the state but coming from outside.

He described his fight with Adams Oshiomhole as “unfortunate situation,” but said he was ready to reach a truce with Oshiomhole.

“It is unfortunate that he is taking the position he has taken; I believe that he was not properly guided. I am his governor and it is my responsibility to seek peace for my state and with all my citizens. I will continue to strive for peace, I will continue to pursue peace, seek the interest of our people and I am open, that we should talk about how to move things forward. The relationship is still frosty but I am doing all I can to try and make it warm just for the sake of Edo people. I am committed to whatever it will take to have peace and not to lose lives in Edo, within the law, whatever I can do that is constitutional, I will do,” the governor said.

He further said he had the full support of his counterparts, governors elected under the platform of the APC, in line with the principles of the party, which always supported continuity.