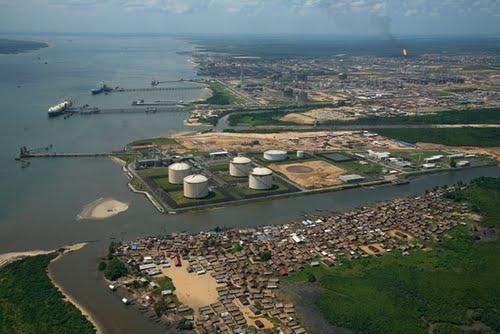 Food items and other essential goods headed to Bonny island in Rivers State have been clamped into a warehouse in the days of an indefinite lockdown while hunger strikes on the island.

Bonny in Bonny local council area an Onne in Eleme local council were locked down last week Sunday on the orders of the Rivers State governor, Nyesom Wike, over rising numbers of Covid-19 positive results.

The case of Bonny was dicey, forcing the governor to summon the monarch and chiefs of Bonny to Government House in Port Harcourt to put heads together on how to lock down the island without roasting lives.

Bonny works hard to avoid being cut off from food supplies since the 18th century when an internal war caused a blockade and eventual starvation. It was gathered that several opinions were tabled at the parley with the governor and the monarch and his team were said to have been asked to go ponder over the idea and reach a conclusion.

It is not clear what was decided but a lockdown was slammed on Bonny soon after. Now, residents have cried out, saying hunger had come to water-locked area It was gathered that the idea of a lockdown was fearful because other islands in Bonny depend on Bonny for food supplies that come from Port Harcourt.

Now, sources said the acute hardship trending in area is now be traced to the reported loss of goods especially, perishable commodities belonging to traders in the area which have been under lock and key at the warehouse at the Coal Beach, Bonny.

A report from the island said: “The said goods were reported to have arrived Bonny Island since Sunday, June 21, 2020 hours after the lockdown was imposed the previous night.

“This development has heightened the food crisis in the area as traders who could have been able to clandestinely sell foodstuffs to their neighbours say their goods are held up at the warehouse where all incoming goods were stockpiled.

“Security operatives securing the area were said not to have the clearance from their superior officers to release the goods in the wake of the lockdown but only allowed their evacuation from the cargo boats that brought them from Port Harcourt when a cargo boat laden with goods from Port Harcourt reportedly sank at the creek by the jetty.

The warehousing idea came when a good vessel was not allowed to off load and it sank.

The sources learnt at the Coal Beach that the security operatives allegedly regretted the incident and now directed all goods to be loaded into the Beach Warehouse.

The source said an official of the COVID-19 Taskforce in Bonny reportedly approached the security operatives to allow for its evacuation but was allegedly told that they don’t have such clearance from their bosses and would not want to risk granting such waiver on their own without hearing from their superiors.

The source was unable to confirm if efforts were made at reaching the commanding officers of the affected security services to get the said clearance, but a source within the COVID-19 Taskforce confirmed that efforts were made to get a clearance for the boat to be evacuated but the security operatives were hard put to give such waiver as they were said not to be a position to do that.

A trader, who simply identified herself as Jovita, according to Kistina Reports, said her consignment of drinks have been held at the Coal Beach since its arrival on Sunday, June 21, 2020. According to her, she could not move them to her shop along Mission Road because of the lockdown order.

Another trader, who does not want to be named, said “my baskets of tomatoes, pepper and other things are in the warehouse there and they are getting spoilt. Me and my children can’t eat and I can’t sell to my customers who have been complaining of hunger because those goods are there”.

“Is this how they do lockdown? Is this not wickedness? How can people be subjected to this kind of suffering? At least the Governor should have given a day or two notice so that we can carry our goods and bring them to our shops instead of losing their amount of money buying the goods and bringing them to Bonny but can’t take them home.”

The same blockade is also being enforced in Finima where goods worth millions of Naira were said to be held up at the jetty with traders not allowed to evacuate them. There are fears that in the coming days the perishable goods would have been lost to their owners and the millions of Naira spent in purchasing them gone down the drain.

The general lamentation of hunger and lack of access of buying of foodstuffs has now been aggravated with these losses as even if there is a pause in the lockdown there may not be foodstuffs to purchase by residents.

Edo: What I told Obaseki – Wike