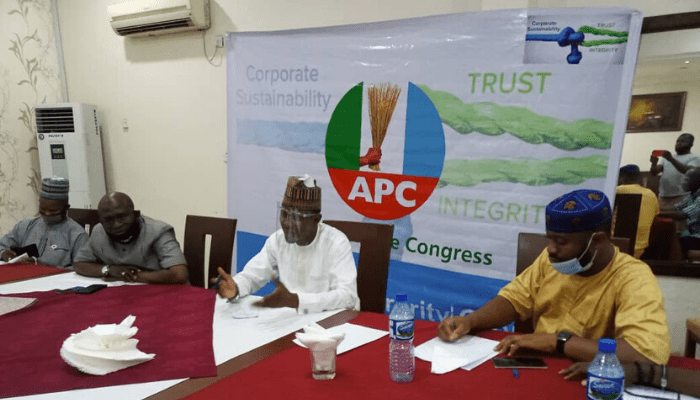 The All Progressives Congress (APC) is to hold an emergency virtual National Executive Committee (NEC) meeting this Thursday to resolve the leadership crisis rocking the party.

The meeting is being coordinated by the Victor Giadom-led faction of the National Working Committee (NWC) of APC with the consent of President Muhammadu Buhari.

Giadom in a notice for the NEC meeting on Tuesday said: “Chief Victor Giadom, having been duly authorized by Court Order to Act as National Chairman of our great party and to preside over all meetings of the NWC and NEC hereby and with the consent of the President Muhammadu Buhari, (who is the leader of our Party) reconvene the NEC meeting that was earlier billed to hold on the 17th of March, 2020, but was postponed. The reconvened meeting shall hold on Thursday, June 25th, 2020.

“In keeping strictly to the COVID-19 Guidelines, the postponed NEC shall hold by virtual means. The codes would be sent by text to the phone numbers of all NEC he members.

APC has been shrouded in leadership crisis since last Tuesday when Court of Appeal upheld the suspension of Adams Oshiomhole, thereby rendering the office of National Chairman vacant, a development which led to the party having two factional National Chairmen, Giadom who assumed office through Court order and Hilliard Etta, who is said to be acting on behalf Abiola Ajimobi.

The Nigeria Police Force had earlier sealed-off the APC National Secretariat, Abuja, following an order from the Inspector General of Police Mohammed Adamu through the FCT Commissioner of Police to the APC Chief Security Officer.

The Police action according to credible sources was to avert plans by the newly-inaugurated Deputy National Secretary, Worgu Boms to take over the office which is still been occupied by the factional Acting National Chairman Giadom.