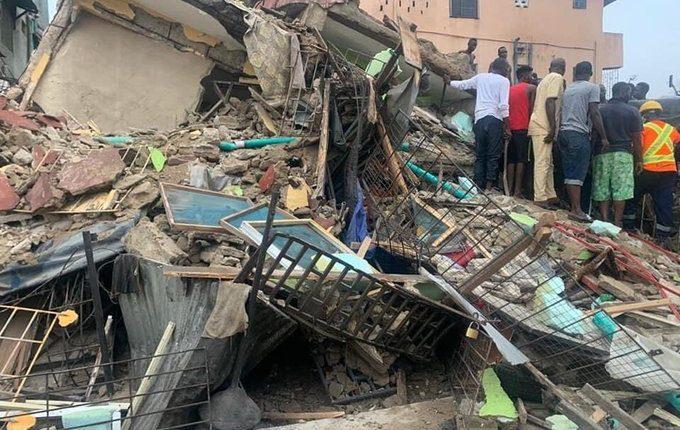 Two people, one of them, a male child have reportedly died in a collapsed three-storey building located at No. 20 Freeman Street, on Lagos Island.

BusinessDay gathered that the incident occurred at about 3am when the families resident in the building were still sleeping.

Efforts were said to have been activated by a rescue team from the Lagos State Emergency Agency (LASEMA) led by the director-general of the agency, who helped in rescuing people trapped under the rubble.

Also, police officers, including the Area ‘A’ commander, Lion Building, Bode Ojajuni were seen battling to save lives at the site, along with the LASEMA officials.

Neighbours were said to have alerted the emergency responders about the incident. On arrival, the first victim to be recovered was a male child, who was pronounced dead.

Eight other occupants of the building have been rescued and were treated by Lagos State Ambulance Services, (LASSMBUS) personnel, while the dead were deposited at a morgue.

The affected families were said to have newly moved into the building as the previous occupants had moved out with the excuses that renovation would be carried out.

It was alleged that the developer brought in these affected families while renovation works were still ongoing. Building collapse is a recurring decimal in Nigeria’s largest commercial city of Lagos, as many buildings especially on Lagos Island are old, weak and lack proper maintenance.

Many of these incidents have also been linked to employment of sub standard materials in building construction, as well poor handling by non professionals.

Among other measures put in place by the government to check the menace and its concomitant consequences is the forfeiture of a collapsed property to the state government.