Shareholders of Zenith Bank Plc will earn N78 billion or N2.50 per share as the final dividend for the year ended December 31, 2019, the Nigerian lender has announced. Subject to approval and the appropriate withholding tax, the final dividend will be paid electronically on March 16, 2020.

Earlier, the bank had paid N0.30 per share interim dividend, meaning that the total dividend paid to shareholders is N2.80 per share, bringing the total to N87.9 billion.

As the news filtered into the market, investors overbid Zenith Bank’s shares, leading to the trading of 112.48 million shares last Friday, worth N2.24 billion. The bank’s share price per unit rallied by 2.32 percent, resulting in a year to date gain of 6.7 percent. It closed last Friday at N19.40 per share.

Interestingly, revenue from Europe posted the best performance, as it increased by 28.9 percent to N25.13 billion in 2019 compared with N19.5 billion in 2018. Notwithstanding, the European market accounted for just 4 percent of Zenith Bank’s revenue in 2019 whereas in 2018 it was just 3 percent. 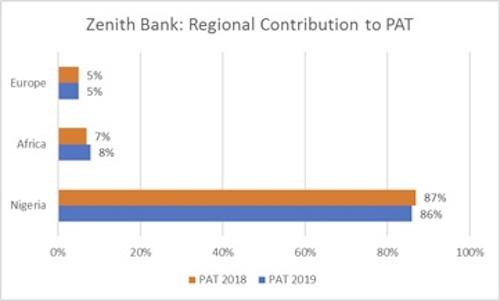 On account of the 4.88 percent growth in Nigerian revenue while Africa’s remained flat, total revenue of the bank rose by just 5.04 percent to N668.44 billion in 2019 up from N636.37 billion in the previous year.

When combined, the revenues from other African countries and Europe amounted to N29.15 billion last year, representing 17 percent increase over N24.92 billion made in 2018.

Economic cost of insecurity amid increasing poverty in the north

Shell slows down on refining, takes up $800m hit after oil price crash

Shell slows down on refining, takes up $800m hit after oil…