No fewer than 21 listed companies on the Nigerian Exchange Limited (NGX) have majority of their shares still in locked-in by controlling-interest investors as against being in the hands of public investors. Therefore, these companies are deficient in the free float of their shares, according to the NGX Regulation Limited (NGX RegCo) X-Compliance Report. All […]

No fewer than 21 listed companies on the Nigerian Exchange Limited (NGX) have majority of their shares still in locked-in by controlling-interest investors as against being in the hands of public investors. Therefore, these companies are deficient in the free float of their shares, according to the NGX Regulation Limited (NGX RegCo) X-Compliance Report. All the 21 companies are carrying regulatory caveat of Below Listing Standards (BLS).

What is free float?

Free float represents the portion of shares of a corporation that are in the hands of public investors as opposed to locked-in shares held by promoters, company officers or controlling-interest investors. It provides a more accurate reflection of what public investors consider the company to be worth. 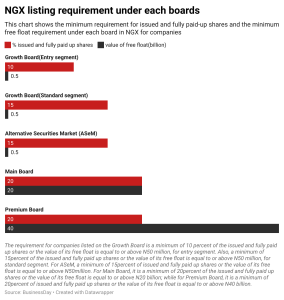 The X-Compliance Report is a transparency initiative of The NGX Regulation Limited (NGX RegCo) which is designed to maintain market integrity and protect investors by providing compliance-related information on all listed companies. The report shows companies that are still deficient in their free float. It also showed those that have applied for waivers from the Board of NGX RegCo, and have specifically provided compliance plans with tentative timelines to support their requests.

Only 7 companies provided compliance due dates 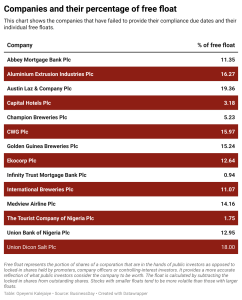 The report stated: “The Board of NGX RegCo considered and approved an extended timeframe for the companies to regain compliance with the requirement of the listing. The companies are however required to also provide quarterly disclosure reports to NGX RegCo detailing their level of implementation of the compliance plans.”

BusinessDay check shows that only 7 companies (about 33.3percent) of the 21 companies the NGX Regulation Limited (NGX RegCo) listed provided their compliance due dates.

Their shares outstanding as against free float 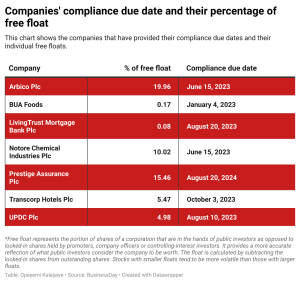 These companies, their free float percentage and compliance due dates include Arbico Plc (19.96percent/June 15, 2023). Arbico Plc which has 148.5million shares outstanding trades at N1.03 per share on Tuesday February 22. The company is listed on the building construction subsector of the Construction/Real Estate sector of NGX.

Shares outstanding refers to the total number of shares a company has issued, while the free float are its shares that are publicly owned, unrestricted and available on the open market.

BUA Foods Plc which listed on the foods products subsector of the Consumer Goods sector trades at N61.4 per share. BUA Foods Plc has outstanding shares of 18billion units. BUA Foods Plc free float is just 0.17percent and its timeline for compliance is January 4, 2023. The company on January 5 listed by introduction on the Main Board of The Exchange its 18billion shares at N40 per share.

This list includes Notore Chemical Industries Plc with free float of 10.02percent and June 15, 2023 compliance date. Notore Chemical Industries Plc which trades at a 52-week high of N62.5 per share as at Tuesday as against a corresponding 52-week low of N56.25 is listed on the agro-allied & chemicals subsector of the Industrial Goods sector of the NGX Main Board. Its shares outstanding are 1.612billion units.

Transcorp Hotels Plc has 5.47percent free float and October 3, 2023 timeline for compliance. Transcorp Hotels Plc listed on the Hotels/Lodging subsector of the Services sector of the Main Board trades at N5.38 per share and has outstanding shares of 10.242billion units; while UPDC Plc which has 4.98percent free float and August 10, 2023 timeline trades at N1.07 per share. The company which is listed on the Real Estate Development Subsector of the Construction/Real Estate sector of the NGX Main Board has shares outstanding of 18.559billion units. 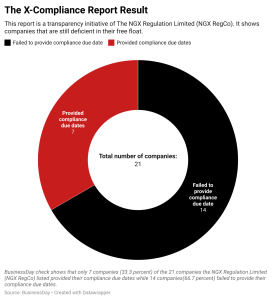 Companies listed on NGX are required to maintain a minimum free float for the set standards under which they are listed in order to ensure that there is an orderly and liquid market for their securities.