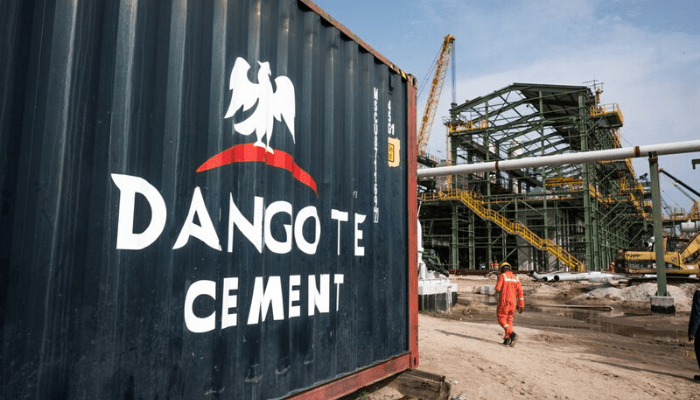 While manufacturers have seen earnings go up in flames due to the devastating impact of coronavirus pandemic shocks, Dangote Cement is thriving as the largest maker of the building material has the financial strength to fend off macroeconomic headwinds.

Dangote Cement has added another superlative to its title, as it emerged as the most profitable manufacturer in Nigeria, thanks to cost control, and aggressive expansion plan across Africa.

Over the past few years, the company had been taking advantage of the country huge infrastructure deficit and rising middle class across the continent to add impetus to earnings.

The company’s Pan African operations are a major drive of Group margins even despite the early effect of global macroeconomic shocks.

Pan Africa’s earnings before interest taxation depreciation and amortization (EBITDA) surged by 23.40 percent to N14.62 billion s at March 2020, supported by strong performance in Ethiopia and Senegal.EBITDA margin increased to 20.90 percent in the period under review from 16.90 percent as at March 2019.

The cement giant said that while its plant continued to operate during this period, it witnessed a reduction in sales.

“The temporary restrictions deployed in Nigeria continued subsequent to 31March 2020, with some amendments. Nigeria sales volumes and values in April 2020 were trending lower than the volumes and values realized during the same period last year,” said the company.

With net cash generated from operating activities to the tune of N125.12 billion as at March 2020, the company has the financial strength to pay dividend, settle its debt and fund future expansion plans.

The company can honour its debt convent without putting pressure on cash flow, and its earnings can cover interest expense, which means it is not exposed to financial risk or beleaguered by debt.

Times interest coverage ratio is 10.54 times operating profit, while finance cost reduced by 23 percent to N9.01 billion as at March 2020.

The proceeds of the N100 billion Series 1 Fixed Rate Senior Unsecured bonds due in April 2025-which was oversubscribed by investors- will be used to facilitate some cement expansion projects, support working capital and to finance company general project.

Including the bond issuance, DCPs debt to equity ratio is 42 percent (from 31 percent in Q1 2020), strengthening its capital structure.

The company received positive ratings on its debt from global ratings agencies.

On 23 January 2020, Global Credit Ratings affirmed the long term and short-term national scale issuer ratings of AA+(NG) and A1+(NG) respectively, assigned to DCP, with the outlook accorded as stable.

There are tough times ahead for cement makers as Federal Government has reduced the amount budgeted for capital expenditure by 20 percent in the 2020 budget due to coronavirus pandemic shocks on revenue and crude oil price.

Constructions activities have been suspended across the country due to lockdown measures impose by government to curb the spread of the virus.

The International Monetary Fund says Nigeria’s economy is expected to shrink by 3.4 percent this year and Africa’s largest economy could face a recession lasting until 2021.

The Nigerian economy has been growing sluggishly since the country existed a recession 2016, and the renewed clashes between farmers and herders-men (that has claimed thousands of lives contributed) undermined Agriculture GDP.

As a result of a border closure imposed by Federal Government in order to curb smuggling of rice and other products, headline inflation rate spiked as price of food skyrocketed.

Investors’ apathy towards the equity market continues to gathered momentum in 2019 as they dumped shares due to lack of transformation policy on the part of government and poor corporate results.

Since the start of last year, yields began a precipitous drop, and the dip gathered steam in the last quarter of the year when the central barred individuals and local corporates from investing in Open Market Operations (OMO) auctions.

Additionally, the statistics body added that capital importation for the first quarter (Q1) 2020-the total amount of foreign investment inflows into the Nigerian economy- declined by 31 percent year on year (y/y) to $5.85 billion in the first (Q1) 2020 from $8.51 billion in Q1 2019.

The strength of China-africa solidarity in defeating COVID-19