In terms of managing debt, BusinessDay’s findings showed the ability of Nigeria’s cement makers to think outside of the box has made them impervious to the current energy crisis undermining businesses across the country.

The benign position means Dangote Cement, BUA Cement, and Lafarge Africa will not only lower their debt-to-equity ratio but also emerge profit margins winners in 2022 amid geopolitical macroeconomic uncertainties aggravated by the war in eastern Europe that has forced central bankers to adopt monetary policy tightening to rein in on spiraling inflation.

“Cement-making companies would have a lower debt-to-equity ratio because they are highly capital intensive,” Seye Adeyeye, analyst at CSL Stockbrokers Limited, a subsidiary of FCMB Group Plc.

Analysts say these developments make cement maker’s stocks hot cake for investors, who are looking for where to pack their money and generate reasonable returns that magnifies their earnings.

Compared to 2020, when the COVID-19-induced lockdown halted building projects, the companies were able to increase cement sales in 2021 and this helped their revenues.

Gbolahan Ologunro, Senior Research Analyst, Cordoros said, “Dangote tries to maintain low leverage, while Lafarge, which used to be highly leveraged, has since 2019 tried to deleverage its balance sheet by using a capital raising strategy.”

Analysis shows that in 2021, BUA Cement had a debt-to-equity ratio of 34 percent, a decline from 39 percent in 2020, when its debt levels were higher than in 2019, when a ratio of 2 percent was also recorded. 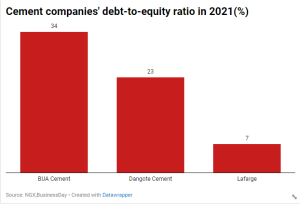 The cement maker also inaugurated a Kalambiana 3mmt line three plants in 2021. BUA’s plant capacity has been projected by FBNQuest to reach 20mmt by 2024, when the company commissions an additional 9mmt.

Dangote Cement, Nigeria’s largest producer of cement and the most capitalised firm in the country, saw a 32 percent surge in its profit to N364 billion in 2021 from N276 billion in the previous year.

The cement giant made N1.38 trillion from sales of building materials and cement, up from N1 trillion in 2020.

An analysis of its financial report shows that Lafarge had a debt-to-equity ratio of 7 percent in 2021, an increase from 1 percent in 2020. This is, however, a decline from a ratio of 11 percent it recorded in 2019.

Although, most analysts say 2022 might not be such an easy year for most cement makers as the rising oil prices would mean the industry would have to battle with high energy costs. 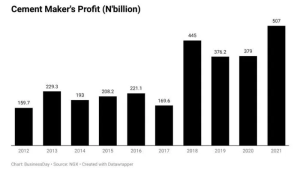 However, a recent report by Chapel Hill Denham stated that the shortage of Low Pour Fuel Oil (LPFO) in 2017 birthed a new era of energy diversification drive that makes the cement sector energy efficient and insusceptible.

Cement makers use alternative energy fuel sources such as coal and liquified natural gas to run plants across the continent, and the strategy has helped them reduce the amount spent on input cost to produce each unit of product.

Lafarge Africa, for instance, is ahead of its peers with the integration of alternative fuels into its energy mix (c.18% in FY-21),” said analysts at Chapel Hill Denham.

“Management is also keen on raising its Alternative Fuel (AF) usage to c.50% of its energy mix since AF is the cheapest thermal energy for kiln. Its planned Captive Power Plant (CPP) in Ashaka can deliver up to a 30% reduction in energy cost,” said the analysts.

BUA currently has c.48MW of electricity generator, which previously ran on liquid fuel (diesel); and a good portion of it has been replaced by liquified natural gas.

“Even at that, the group’ Ethiopian business had previously employed bags, tyres, and plastics as part of its energy mix, while also substituting some sawdust for coal at its power station in Zambia,” said the analysts.

FG begins process to declare all ICDs as ports of destination, origin