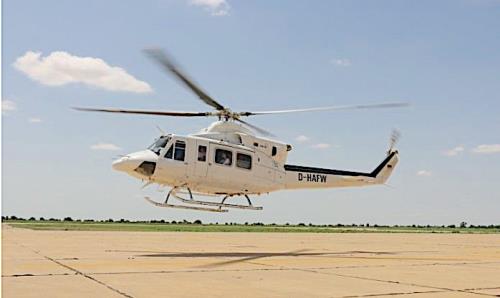 Boko Haram’s attack on a helicopter belonging to the United Nations in Borno has further exposed not only the combat readiness of the Al-Qaeda and ISIS linked Jihadist operations in the region, but also the weakness of Nigeria’s security architecture, in dealing with insurgency.

The UN Humanitarian Air Service helicopter was hit at Damasak, a community in Borno State, about 150 kilometres (90 miles) from Maiduguri, the State Capital, in the North Eastern part of Nigeria on Saturday, July 4, 2020.

The attack on the UN helicopter reportedly killed two people including a five-year-old child and infuriated President Muhammadu Buhari who threatened severe consequences on the perpetrators.

It was, however, reported that as at the time of the attacks, no aid worker was on board even as the crew members were lucky to escape unhurt.

The attacks led to UN suspension of rotational flights for one week “to engage with government partners and conduct new risk assessments”.

The helicopter was helping in providing aid to the war-hit people of Borno State and the UN has provided the aid to over 7.8 million people, according to Edward Kallon, the UN Humanitarian Coordinator in Nigeria.

The attack is part of the propaganda mechanisms by the Boko Haram insurgents to attract attention and score cheap popularity with soft targets and international institutions.

The terror groups have continued to find safe operational havens in the large civilian populated rural and remote communities located deep inside the Sambisa forests where they launch barrages of attacks on poorly secured villages, military units and critical state infrastructure.

These attacks continue to make nonsense of Nigerian military’s claims that it has “degraded” Boko Haram capabilities, to justify the huge budget allocations which rose from about US$1.44 billion in 2009 to US2.81 billion in 2018.

Available statistics indicate that the budget of the military has been on steady increase since 2008 (N191.5bn).

With over N6.7 trillion allocated to the security sector between 2010 and 2017, the unending military campaign against Boko Haram now constitutes the largest drainpipe in Nigeria’s financial history.

This amount however, does not include extra budgetary allocations such as the US$1 billion borrowed by the Federal Government in 2013 to fund counter-terrorism operations and the US$21 million approved for the Multinational Joint Task Force (MNJTF) in June 2015.

On 14th December, 2017, the Buhari administration withdrew yet another $1b from the Excess Crude Account with the approval of the National Economic Council NEC, made up of Governors of the 36 states.

NEC had explained that the money was approved for amongst others, “the purchase of equipment, procuring intelligence, logistics and all that is required to ensure that we finally put to an end the scourge of insurgency.”

“It’s on record that the Buhari administration paid about USD 490 million for a dozen Super Tucano fighter aircraft in a direct, government-to-government (no Contractors or Commission Agents) transaction with the government of the United State.

He gave the total of what was spent, at $880m, after the military procurements had been made.

Despite these huge allocations, the military-led counter-insurgency operations have not achieved much in Nigeria.

In the forest, the Boko Haram leadership conducts their jihadists operations and even carries out religious activities in a location named “Sabil-Huda”, deep inside Sambisa.

The leader of the Boko Haram, Abubakar Shekau, is said to be heavily fortified with a well organised structured hierarchy of command made up of different layers, the closest to him being the senior commanders and members of the Shura council.

These are closely followed by another layer made up of well paid foot soldiers and jihadist fighters, abducted women and children.

Shekau is said to be protected by the local people who reside in the subdued communities in the thick and rocky forest of Firgi, inside the Sambisa forest.

He is reportedly protected by 10 loyal special fighters, who control about 40 Toyota Hilux mounted with Anti-Aircraft guns, 2 Armoured tanks and 2 APCs, all carefully concealed under the thickness of the Firgi forest, protected by camouflages.

Boko Haram leaders also run a mini government where they collect taxes, govern and extract loyalty from the communities, using the carrot and stick to reward obedience and punish disloyalty.

Security experts believe that these have largely been responsible for failures to make serious incursions into the Boko Haram camps, despite bombardments by the Nigerian Army artillery. The Nigerian Air Force had bombed several times but because of the strategic position, the insurgents always find a safe haven in ‘Farisu’ to conduct their activities. Sabil-Huda or ‘Farisu’ also serves as a jihadists market for the sale of basic items such as telephone, recharge cards, charging of phones and provision stores.

It is estimated that about 25 Boko Haram jihadist camps headed by unit commanders, having no fewer than 1000 fighters currently exist within those remote locations in the deep and marshy Sambisa Forest.

For these fighters who live perpetually on hard drugs, their rewards consist of regular supply of free women abducted from various raids, free food and cash from their sponsors.

Many obviously have very little or no skills and therefore, feel very comfortable with their engagements and reward system.

At least, 30 000 people in Nigeria have been killed in terror attacks since 2003, causing the displacement of more than 2.4 million people.

These groups include Boko Haram, operating in the Lake Chad Basin region, Islamic State West Africa Province (ISWAP) and Ansaru, also called al-Qaeda in the lands beyond the Sahel.

Since January 2020, least 2,771 Nigerians have been murdered in cold blood, according to figures released by the Council on Foreign Relations (CFR), a US-based think-tank under the Nigeria Security Tracker (NST) programme.

Security experts say insurgents have continued to wreak havoc because the military lacks strategic and tactical imprecision largely due to poor intelligence gathering.

The coordinator, Defence Media Operations (DMO), John Enenche blamed the weak intelligence on the lack of cooperation from citizens.

Enenche also said these terrorists have managed to sustain attacks on civilians because they are heavily funded, but said their sponsors are still unknown largely because the military’s duty is to defeat the terrorists and not to uncover their source of funding.

Enenche said the terrorists use sophisticated and expensive weapons, which indicates that they are sponsored. He said the DSS and NIA are working to unravel the sponsors.

Following the attack on the United Nations Humanitarian helicopter, there is palpable fear that the Boko Haram insurgents and their allies may have acquired the dreaded Surface to Air Missiles (SAM) used in shooting down planes.

Nigeria has battled Boko Haram for about 11 years now and spent huge amounts of money fighting the insurgents yet the Boko Haram men are perhaps more energised with the acquisition of more sophisticated weapons and massive recruitment of hapless citizens of the beleaguered north east of Nigeria.

Speaking to BusinessDay about the scourge, former presidential candidate of the National Conscience Party (NCP) in the 2019 general election, Tanko Yunusa expressed worries that much has not be achieved on the war against terrorism because of conspiracy against Nigeria.

“Nothing has been done on security. For a long time now, I have been saying that there is a conspiracy against Nigeria both internationally and locally. If not, how on earth can Boko Haram have a weapon that can bring down a helicopter? The same Boko Haram that I know started with a bow and arrow. How did they come about sophisticated machine guns including rocket missiles? It is unbelievable,” he said.

He further said that the conspiracy is probably because Nigeria’s intelligence is not doing the right thing, telling Nigerians exactly where the Boko Haram are getting this particular weapon from.

On why the Nigerian government cannot bust the alleged international conspiracy, Yunusa said the situation is far beyond what Nigerians can think of.

He stressed that the Nigerian government is either incapacitated to knowing all of these things or they are playing to the gallery, adding that there is inefficiency and ineptitude in government.

Yunusa regretted that President Buhari to whom much hope was reposed to fight Boko Haram because of his military background appears to have failed the nation.

“This is a government headed by a former general in the Nigerian Army, who has been part of the civil war. That is to tell you that he has a deep knowledge of artillery and information gathering. But for him to have led this country to this particular level then it is regrettable because he told us that he is going to end Boko Haram in less than 6 months, but 6 months is turning out to be 6 years.

“So, unfortunately he cannot account for the funds spent and he has refused whether directly or indirectly to relieve the service chiefs of their jobs to show that they are incapacitated and we need people who are more agile and capable of doing this job for Nigeria,” he said.

He warned that there is very much danger ahead and advised Nigerians not to believe in the government story that the Boko Haram has been “technically defeated , incapacitated and downgraded,” saying that could give the people a false sense of security.

“Somebody that is incapacitated, how can the person get weapons to shoot down a helicopter? The situation is so dicey; unacceptable”, he said.

‘If I were in power, I would definitely investigate what Mailafia has said on…

CAMA 2020: We do not have problem paying tax – Bishop Orire