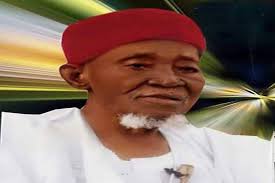 Prominent Nigerians, including the immediate past Senate president, Abubakar Bukola Saraki and former governor of Kwara State, Abdulfatah Ahmed, have continued to mourn the demise of the leader of Ansarul Islam Society of Nigeria, Sheikh Ahmad Kamaldeen Al- Adabbiy.

Al- Adabbiy, a former commissioner for Education in Kwara State died on Friday in Ilorin at the age of 82. He was buried the same day.

Saraki, who is the Baba Adini of Ansarul Islam Society Worldwide in a statement he personally signed said: “I am deeply saddened by the passing away of the Khaleefatul Adaabiyyah, former Permanent Secretary and ex-Commissioner for Education, Alhaji Ahmad Olayiwola Kamaldeen Al Adabbiy.

“May Allah forgive him and admit him into Aljannatul Firdaus. I pray that Allah strengthens the Kamaldeen Al Adabiy family and the Muslim Ummah at this difficult time.”

In his own condolence message, former governor Abdulfatah Ahmed urged the Kamaldeen family and the Adabiyya Islamic Movement to take solace in the fact that the departed scion was an exemplary man who upheld his late father, Sheikh Muhammad Kamaldeen’s legacies in Islamic and Quranic education.

Ahmed in a statement by his media adviser, Muhideen Akorede added: “I offer my deepest sympathies to the Kamaldeen family, and the Adabiyya movement on the sad loss of Khalifa Ahmad Olayiwola Kamaldeen, a great man. I share your pain and ask Allah to comfort you in the difficult days ahead. May Allah elevate the Khalifa to the rank of the favoured in Aljanah and forgive his earthly infractions”.

The National President of IEDPI, Aliyu O.Uthman, in a statement by the union’s Spokesman, Abubakar Imam described the death of Al- Adabbiy as a rude shock and a death too many.

It described the deceased as a seasoned educationist,distinguished technocrat and impactful community leader whose passage would be sorely  missed by all.

The union said that the contributions of the deceased in different spheres over the years towards the progress and development of Ilorin Emirate, Kwara State and Nigeria as well as the entire humanity were too varied and many to be glossed-over.

It recalled that the departed statesman, who served as the national vice-president of the union at various times, played so many significant roles over the last five decades that the history of the union would be uncompleted without a commensurate acknowledgement of his distinguished contributions.

“Despite his relatively old age and accomplishments, the National President said that it was quite unfortunate that Shaykh Kamalud-Deen died when the community needed his wise counsels most, particularly in view of the challenges of the moment, which required more statesmanship and wisdom,which he was blessed with,” the statement added.

While sympathising with the Aragbaji family of the first Grand Mufti of Ilorin, the Ansarul Islam Society of Nigeria; the Adabiyyah Islamic intellectual group; the Emir of Ilorin, Alhaji Ibrahim Sulu-Gambari; and the good people of Ilorin Emirate, the union pray Allah to forgive the shortcomings of the late cleric and grant him a space in Aljanah Firdaous.